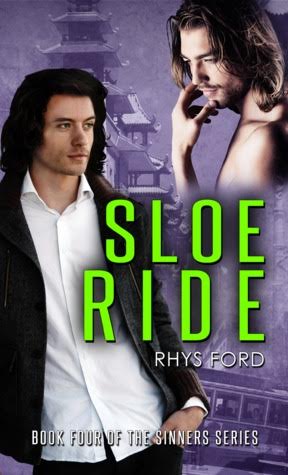 It isn’t easy being a Morgan. Especially when dead bodies start piling up and there’s not a damned thing you can do about it.

Quinn Morgan never quite fit into the family mold. He dreamed of a life with books instead of badges and knowledge instead of law—and a life with Rafe Andrade, his older brothers’ bad boy friend and the man who broke his very young heart.

Rafe Andrade returned home to lick his wounds following his ejection from the band he helped form. A recovering drug addict, Rafe spends his time wallowing in guilt, until he finds himself faced with his original addiction, Quinn Morgan—the reason he fled the city in the first place.

When Rafe hears the Sinners are looking for a bassist, it’s a chance to redeem himself, but as a crazed murderer draws closer to Quinn, Rafe’s willing to sacrifice everything—including himself—to keep his quixotic Morgan safe and sound.

Oh, how I love this series. I had to get that out of the way right off. Sinner’s Gin was my first by this author and after getting sucked in by Miki and Kane, I’ve devoured each new book as soon as I could get my hands on it. But during all the other books, I’ve had a favorite character outside of Miki. I know, I know. Miki is, and always will be, my man, but I’ve always had a special place for Quinn, the youngest of the Morgan brothers. Unlike the roughness of the elder siblings, Quinn is a bit on the quiet side. He’s the black sheep of the family in a way because he went into academics instead of becoming a cop. There’s something about Quinn that’s just… different. Not different in a bad way by any means. Just different from the others. 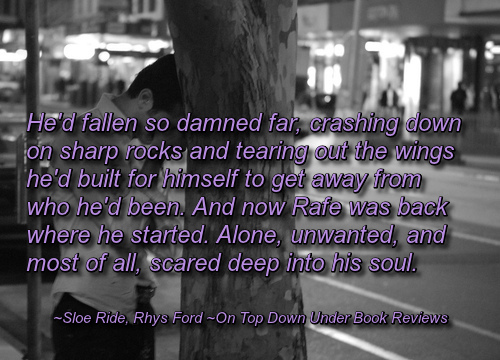 Then we have Rafe. Rafe is an old friend of the Morgan clan. Once upon a time, Rafe had it all. He had fame, glory and even a man to come home to each night. Unfortunately the fame and glory, as is known to happen, turned to partying in excess and drugs. You know the old saying about sex, drugs and rock and roll? Let’s just say that Rafe wanted all of the above and it became his downfall. After one particular night of partying, his life was turned upside down. He pays his dues and comes back to the only home he knows. Of course, there’s nothing there for him other than a ‘Dear John’ letter. He’s lost his band, his lover, and pretty much everything else. All this because of a dumb mistake. There’s one thing he hasn’t lost, thankfully, and that’s the Morgan family. They always stood by him, regardless of his screw ups. They aren’t just friends. They are family in every sense of the word. That is, except for Quinn. The thoughts Rafe has had about the younger Morgan over the years would be considered anything but brotherly. 😉

Rafe could still feel the steely clamp of Connor’s fingers on the back of his neck when he’d been warned off a fourteen-year-old Quinn.

There was no denying it anymore. Quinn Morgan had definitely hit manhood and made it his bitch.

Then there’s Rafe’s music. Once on top of the world in a famous rock band, now no one will touch him with a ten foot pole. He’s damaged goods and who would be willing to take a chance on a washed up, formerly drugged out bassist who did time? Sure, his best friend’s lover is one of the founding members of Sinners Gin, but would those guys even glance his way if he said he was interested in auditioning for their new band? Music is Rafe’s life and without it, what’s left? There’s no family outside of the Morgans. No lover. No… anything.

Quinn has wanted Rafe for as long as he can remember. Not just wanted, but had his heart broken by the older boy when he was only a teen. Oh, there wasn’t any type of real relationship between the two back then, but Quinn is a sensitive soul and his heart ached when Rafe took off just the same. If you read Tequila Mockingbird (#3 in the series) you already know that the very adult Quinn asked Rafe to, shall we say, help him with a little problem? I’m going to go into fan girl mode and say that was a “Woo hoo!” moment for me. I love these two. Quinn is such good guy and Rafe is such a broken bad boy… and well, you can’t help but want to see these guys together. For Quinn to be so blunt was pretty awesome. 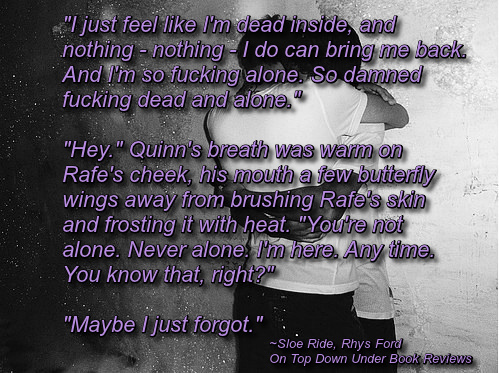 Rafe is back in the land of the living and he and Quinn are picking up where they never really began years before. For some reason, Rafe is the only one in Quinn’s world who understands him. He loves his big family, but he often feels like the odd man out. He’s not loud like they are. He (as I said) isn’t in law enforcement. Then there’s the fact that Quinn isn’t wired the same way the others are and it’s refreshing for someone – Rafe – to finally get him. Rafe definitely gets him and he wants him with an intensity that scares him.

The two men develop a close friendship that becomes closer when it looks like someone is trying to kill Quinn. Bodies start piling up and it looks like the next victim will be him. Why would anyone want to kill Quinn? He’s the quiet one of the bunch. He teaches and does his own thing. He doesn’t put his life in danger every day when he goes to work like his father and siblings do. But there is definitely someone out there who is determined to see Quinn’s days end. Rafe steps up to the plate and becomes not just his protector, but his lover as well.

There’s not a whole lot more I can say without giving this book away. I will say this….. I absolutely adored this story. I’ve been eager to see Quinn find his own happily-ever-after and the author made sure it was done with a bang. It was also a pleasure to see Rafe not only find his music again, but to also find that one person who could love him regardless of the mistakes of his past.

I think it’s pretty obvious that I am a huge fan of this series and this author. With each new book you’re not only given an entertaining read, you’re also brought into the huge Irish family that is the Morgans. It took me awhile to appreciate Brigid, but now you can’t help but love her and the rest of the gang.

“Brigid is kind of like Russia. She kind of gets you, not the other way around,” Miki muttered only low enough for them to hear. “With teeth. Big, scary, kissy-faced teeth.”

If you’re a fan of this series, you’ll love this book. The sex, as always with Rhys Ford, is hot. The mystery will keep you guessing. The romance goes beyond sweet and you’ll be cheering for these guys from the get-go. The humor, as we’ve grown to love and expect, is there as well. A very entertaining read.

“Q, somebody can get pregnant just by standing between Miki and Kane,” Rafe teased. “Just don’t sit on anything without a tarp on it.”

You can find my reviews of the Sinners series and other Rhys Ford books here. 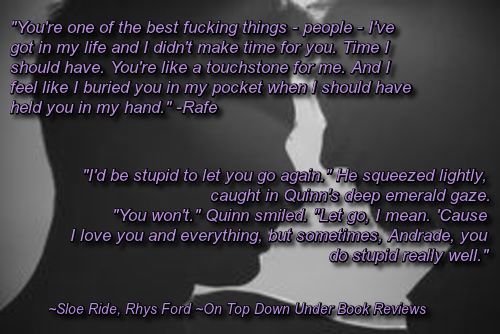 Previous post
You Are the Reason (The Tav #2), Renae Kaye
Next post
In the Middle of Somewhere, Roan Parrish

Great review, Cindi! I’m so glad you loved this book! I can’t wait to read it myself. 😀

Thanks, Trisha. You’ll love it. I’ve adored Quinn since his introduction way back when. It was awesome to see him get his HEA.

You can really feel the love in this review Cindi, I love Rhys Ford too and this series, thanks for a fantastic review

Thanks, Paul! I tried to tone down my fangirling for this series and this book, but I don’t think I succeeded. 🙂 If you love the series, you’ll love Quinn and Rafe’s story.

Great review, fangirl Cindi 🙂 🙂 Love the pics and quotes and the books in the series always sound really good through your reviews.

Thank you, Kazza. Yes, fangirl Cindi came out to play for this one. 😉 This is a great series. Each new book is every bit as good as the one before it.

Love this series! Why Rhys is on auto buy! Just wish we had the music to play along while reading! Great review

Thanks, Ann! Wouldn’t it be great if we had the music to listen to while reading the books? I think it’s kind of obvious that I really love this series as well. 🙂

Great review, Cindi. I certainly understand why you’re a fangirl. 🙂 I love this series, too. Already have my copy pre-ordered. Can’t wait to see how Rafe helps Quinn with his problem. 😀

Thanks, Lisa. I remember this being one of the series we both have in common. I think you’ll be pleased with exactly how Rafe helps Quinn with his problem. 🙂 It’s a great book. I look forward to hearing your thoughts on it when you read it.