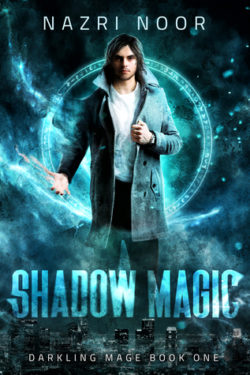 The gods are dying. But for one man, death is only the beginning.

Murdered as a ritual sacrifice, amateur thief and professional charmer Dustin Graves mysteriously survives, finding himself gifted with strange, dark magic. Then more dead bodies turn up. Some are human, but one is a god of the old world, slain at his own doorstep.

Mortal or divine, the bloodshed must end, and Dust is the mage for the job. But first he must contend with a succubus, a talking sword, a spider queen, a goddess of magic, and eldritch abominations from beyond the stars. No big deal… right?

If you like snarky heroes, snappy dialogue, and a bit of grit and gore, you’ll love the first standalone book in Nazri Noor’s series of urban fantasy novels. Explore the Darkling Mage universe and discover a taste of Shadow Magic today.

This is an enjoyable first book in a new YA/NA UF series. There is a (free) prequel – Penumbra – that you can read beforehand. It really isn’t necessary to have read it, the author catches you up pretty well in Shadow Magic, but I’m glad I read it first.

It’s a month since the end of Penumbra, when Dustin Graves found himself on the end of a ritual sacrifice. He’s feeling a little more comfortable living within a world of magic that runs parallel to the human one. The Veil keeps a thin but definite separation between humans, the ‘normals’, and the magic of the Lorica. This book also introduces us to some other supernatural beings outside the Lorica. Dustin’s working on his shadowstepping – his ability to use shadows to stealthily take him from one place to another. The Dark Room, where he travels when he steps between shadows, seems better, less intimidating, than when he first stepped. However, he may have other talents which Thea, his boss, seems certain lie latent within him.

In his latest job Dustin has to retrieve a book for the archives, it’s the Book of Plagues and it’s

somehow fallen into a local human couple’s hands. Dustin is a Hound, he tracks down arcane pieces that aren’t where they should be and retrieves them, often with the help of other Lorica magic users, like  Prudence and Bastion who are Hands, a group that physically fight with the aid of their unique skillset. Dustin likes Prudence, but he and Bastion have locked horns since they first met. The job turns out to be bigger than anyone initially suspected. The couple who have the book are dead when Dustin arrives. Their death isn’t caused by any human so the Lorica sends specialists out to make the scene look like human on human crime, and the Book of Plagues, well, it isn’t being retrieved without a bit of a fight.

This latest case sets in motion other bigger issues, like minor gods/entities being killed. Anytime a god or entity dies there’s an imbalance that needs to be rectified. The entities also aren’t happy about the Lorica not keeping them protected and maintaining balance. Thea takes Dustin out to learn about reagents, the different type of enticements for the different entities. Once the reagents do their thing, it helps them lock

onto a location for the particular being they want to commune with. They also require some scrying to enter the entities domain once found. Some like fortune cookies, some like puppies and lambs before the Lorica agent can enter. Dustin  discovers he has quite the degree of charm and diplomacy, even before he’s in the entities territory. Like with Layla the succubus who hangs out at Temple bar. She will trade information for a kiss, this time from Dustin. We all know a succubus kiss is so much more but Layla gets a little more than she expected, learning Dustin has some darkness at his core. News to him. But his magic and this whole new world is eye-opening. The darker side is confirmed again when he visits Hecate in her domain. It’s definitely quite a lot to take in during the first month on the job.

It’s hard to talk about this book without adding spoilers, so I’ll just add some of my overall thoughts.

The good world building continues on from Penumbra. Dustin is still developing as a character and so are relevant secondary characters like Herald, the Lorica archivist/alchemist. Herald is actually my favourite along with Vanitas, the telepathic sword. Then there’s Prudence and Bastion, both of whom were introduced in the prequel. Thea wants Dustin kept under wraps as she believes he has great potential and that the Black Hand are after him once again. Some interesting new characters appear, including a vampire, Sterling, a werewolf, Gil, and their intriguing leader, Carver, who I can’t wait to see do what I believe he’s capable of doing. I’m thinking you might need to hold onto your seats.

In spite of a huge learning curve for Dustin, and he’s still reeling from his premature and nasty death, he often quietly loiters around his dad’s house and wishes he could go in and tell him he’s okay. It hurts to see his dad obviously grieving, but he isn’t allowed. Besides, his dad buried (a facsimile of) him so it would be one hell of a shock and an even more impossible explanation, which he can’t give anyway. Getting to see his dad seems to have become a bigger arc in itself with a bargaining chip thrown into the mix.

There are also a couple of mythological Greek characters in Arachne, who once challenged Athena to a 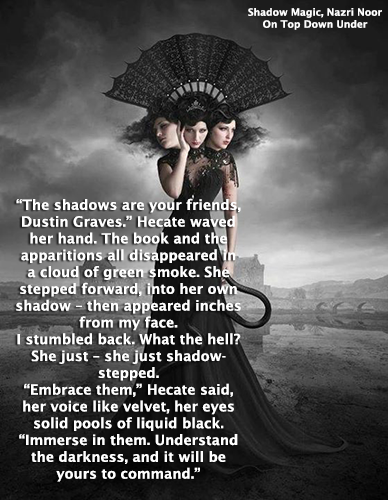 weave off, as you do with a goddess, and ended up as, well, spiderwoman. And also Hecate, the goddess of witchcraft, who gives Dustin some cryptic but good advice… as well as throwing some magic oomph around her domain. I do love a bit of mythology in my supernatural, urban fantasy, paranormal reading. I wasn’t disappointed. While these were tempting morsels, I’m certain there is much more to come because we haven’t even scratched the surface of the Eldest.

By the end of this book, Dustin is unsure where he fits. There is the constant hint of who he might be, as in the possessor of darker magic, and that he’s much more than a shadowstepper. I’m sure Dustin will sort it out, but sometimes he just seems younger than his twenty four human years, Bastion is the same, and I want to shake these two. Get along, guys. Shadow Magic doesn’t end with a cliffhanger, as such, but it does raise more questions as the series builds momentum – as all series must. Dustin is in a state of flux after some high drama and new players show their hand. So where does he go next? How will the characters I’ve met thus far continue to interact, especially given current events? What role will they play in what’s to come?  I’ll admit I’m unsure about these things.

All in all I’m really enjoying the Darkling Mage world so far. It’s a good series for YA/NA and adult readers alike. I’m very much looking forward to book #2. Bring it, dear author, don’t spare the action or the character development. You better believe I’m counting on it all. Mwahaha!! 4 Stars!

It’s so hard to find good urban fantasy with good world building. This looks like the start of a really good series. You know my love of mythological Greek characters so that would’ve sold me had the blurb and review not already. 🙂

Great review. I really love the photos and quotes you used.

Thanks, Cindi. It can be hard to find a good balance in the books I want to read in UF but this series promise much and is supremely interesting. I’m looking forward to more now 🙂