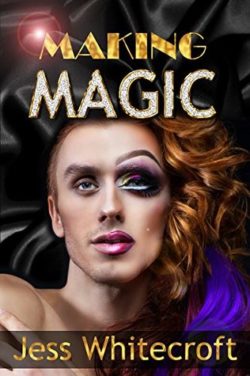 Sweet, helpful, sympathetic – both in and out of drag Stephen Walsh (aka Helena Montana) plays Disney princess to his best friend Bunny’s snarling Ursula, the Blanche to his Baby Jane.

But like so many Disney princesses, Stephen has dark origins. Violent drunks, thieves, liars, cheats – he’s had them all and had his heart broken so many times that he’s decided it’s easier to remain single, even if some days the loneliness is unbearable.

Then one day he walks into the local magic store and meets the owner’s nephew. Newly arrived from San Francisco, Hu Chen is shy, thoughtful and a perfect gentleman, so different from Stephen’s usual type that the attraction between them catches both of them by surprise.

As their flirtation blooms into a hot summer fling, Stephen is forced to confront his painful past, and face the frightening possibility that it has left him too broken to learn how to love a good man.

This full length novel (80,000 words) can be read as a standalone or as a sequel to All That Drag.

Stephen Walsh, a drag queen who lives and works at FuBar, has been a magician’s assistant in his time, and like everything he’s involved with, he knows the history behind it well. Hu Chen is an IT consultant who has just moved to Pittsburgh to live with his Aunt Li above her magic shop that is chock full of everything magic you can think of. She’s a hoarder. Hu loves his aunt because she’s the rebel of his Chinese-American family but the hoarding’s getting harder to handle. Helena Montana, aka Stephen when not in drag, has promised another queen, Venus Envy, that she will make a clamshell for a photo shoot Venus is having. Even though Venus is a total user and a bitch, Stephen/Helena is kind and helpful. Mind you, once Bunny knows, she hussles to make it work to their advantage.

So Stephen ends up at Aunt Li’s magic shop a fair few times looking for some specific things needed for the clamshell photoshoot. Stephen and Hu hit if off over a shared love of magic and shared creep factor over Gentleman Tim, a mannequin Aunt Li keeps in the store. They also bond over incorrect cultural rep in Breakfast at Tiffany’s and a screenplay bastardising of Capote’s book.

FuBar has been doing better since Stephen allowed the ladies burlesque nights and naked magic nights to happen when Bunny was in jail. So money is not as tough. The photoshoot for Instagram  that Venus sets up also helps them out because Bunny and Helena have their own Trojan Horse moment, stealing the shoot with their Judgement of Paris interpretation.

Hu basically ends up assimilated into FuBar and falling for Stephen, and Stephen for Hu, in spite of Stephen’s fears that a straight boy, which Hu isn’t, he’s bi, is falling for Helena and not Stephen. Which is sadly not a first. Stephen has always had the worst taste in men. Hu couldn’t possibly be as lovely as he seems given previous boyfriend’s horrendous track records.

For the first time in his life he was in love with a good man, and it had somehow collided with the realization that the bad ones had left him so fucked up he might not be fit for love at all.

Hu has a lot of guilt and sorrow in the background he has to fully recover from, but he’s wide-eyed and happy about this new world of drag and FuBar that is opening up to him. He’s a revelation to Stephen because he’s rather quiet, boring – Hu’s own words – and he’s often, even more to Stephen’s delight, old school with his romantic and sexual phrasing and word choices. They work as friends and they work even better as lovers.

“The first night he stayed over, he asked me if I’d let him take my make-up off. Turn me back into a boy. He said he wanted to unwrap me, like I was a gift.”

Still, Stephen is having a collision of his feelings for Hu and his increasingly conscious thoughts about his past, especially his ex, Mark. 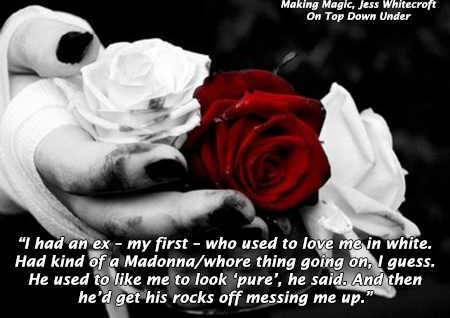 “It’s so good. You’re like some kind of alchemist when it comes to booze.”
“Ah, you know me. Drinking and boning are like the only things I’m really good at, and you should always do the things you’re good at.”

Nothing phases Justin. I hope he keeps on keeping on in the best way Justin can, a free sprit who doesn’t overanalyse a thing.

This book had me either laughing my tits off or teary. It has some stealthily emotional moments that really got to me. There’s such a sad backstory to both Stephen/Miss Helena’s life and to Hu’s that I found myself on a knife’s edge waiting for something to fuck it up, RuPaul’s famous line  intended, along with being swept up in the sweetness of their relationship.

Making Magic has a lot going for it –

Great dialogue. No matter who’s talking. It’s snappy, funny, touching, sexy, and funnier some more. It grabs drag culture by the tuck, duct tape and all. If you enjoy Drag Race then you should enjoy these books.

Venus Envy was having a moment. She’d been featured in a Buzzfeed listicle about Fourteen Flawless Queens You Need To Follow On Instagram, prompting Bunny to turn so green she could have cosplayed Elphaba without make-up.
“Her?” Bunny had said. “Are you fucking kidding me? She has one angle and she looks like Draco Malfoy out of drag.”

“How’s my clam shell?” asked Venus.
“Clammy,” said Stephen.
“Can I see?”
“Oh for God’s sake, Venus,” said Bunny. “You don’t just march up to a lady in a crowded bar and demand to take a peek at her clam.”

Bunny is a scene stealer when she’s on page, which is often as she and Helena are besties. More, they’re drag family with all the drama and moments and drinking and drugs and fun and love. And heart. Lots of heart. Along with unswerving and deep loyalty and understanding of one another.

Stephen and Hu are two lonely MCs who are inherently nice people in spite of setbacks and hurt. They both have some issues not really dealt with that need to come out. Especially Stephen and Stephen as Helena.

There is a deeply romantic element to the well named Making Magic, I don’t recall reading I love 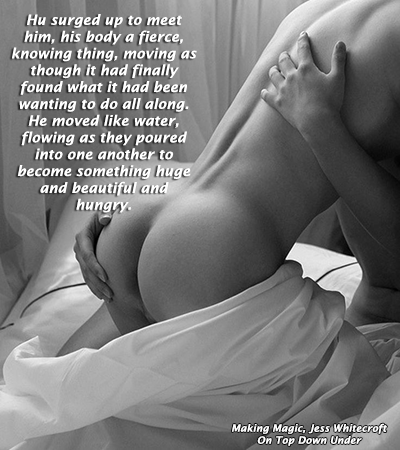 you, once it’s said, quite so often as I did in this book. But it suits everything. Initially I felt it was desperate, and it is to a degree, but it’s written that way. It’s something they both want at their core but are also scared about. Stephen isn’t sure of functional and Hu isn’t sure about a gay relationship – he was married to a woman previously. They have to sort through deep-seated feelings. Once they get past the trepidation the I love yous are natural for the two of them, both of whom are still young – Helena is turning thirty – but old school in many ways. Both are romantics. They have a bit of work to make it right, and absolutely no one is perfect, and work they do.

There’s a sexual intimacy that builds between Stephen and Hu as they sort things out, a sweet eroticism. Not over the top. There is more sex in All That Drag which suited that relationship to a tee. Here, it’s more sexy-romantic and a working out of how they fit together. Jess Whitecroft knows how to write what suits the relationship and the characters.

Personally, I do recommend you read All That Drag before Making Magic, it’s terrific reading, but you certainly don’t have to in order to enjoy this book. I’ll also add that a fair part of All That Drag is ménage, which some readers are not so fond of, but Making Magic isn’t.

I loved this book. It’s another winner in the FuBar series, I was a little worried that no one and

nothing could work after Adam and Ryan. I shouldn’t have worried because Stephen and Hu were a lovely pairing. I don’t know where this quirky, fun and sometimes emotional world is taking me next, and with whom, I just know I want to be there and I’m really looking forward to it. Besides, the Amaretto Sour toe incident is explained here, so I’m good for whatever comes. Another great read by Jess Whitecroft, who is well and truly cemented as an absolutely-must-read for me.

“Justin, did you hear that?”
“Hmm?” Justin wandered over.
“Miss Helena will be entertaining a gentleman caller this evening,” said Bunny. “So whatever plans you have for piss play, gangbangs, bukkake parties or Tijuana donkey shows, either shelve that shit or do it very, very quietly, okay? We do not want the nice man to think we’re a depraved nest of weird sexual deviants.” <--- That made me chuckle. I know I'd adore Justin. I always love when a 2nd book in a series entertains me as much as the first. Great review. This looks like a great series. (I always love when your reviews start with 'NSFW Review'.) 🙂

That quote cracks me up every time. Besides, they are a nest of sexual deviants, lol, and that’s included in amongst what I love about them 😀

It’s a fantastic series, I’m trying to get my son to read it because I know he’d love it and his review would be amazing, but he’s a lot busy. Boo.