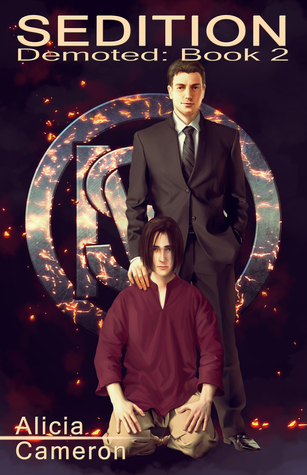 Genres: BDSM, Fantasy, Gay, GLBT, Romance, New Adult, SciFi
Sascha’s world changed when Cashiel Michaud bought him, rescuing him from a brothel and a life of torture. They developed a sexual relationship, but can their relationship amount to more than that? Deceit, lies, and political scandal color not only their world, but their relationship, and dark figures from both men’s pasts threaten to intrude on the few moments of peace they have. A slave is never safe from harm, nor is an outcast family member. In the end, are Sascha and Cash strong enough to face the challenges, or will they be torn apart forever? (M/M – See publisher’s page for content labels.)

Sedition takes up immediately at the end of Subjection. Cashiel and Sascha managed to get through Cashiel’s mother’s grasp and also worked out a way to be 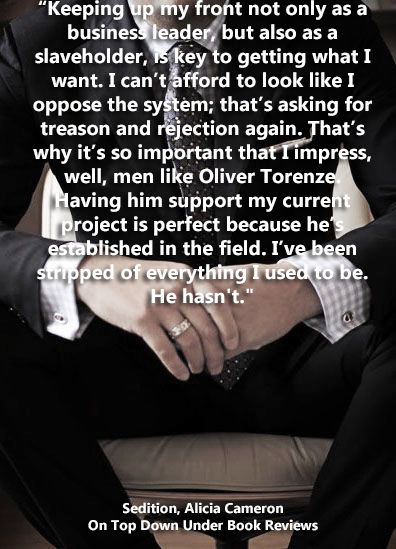 more than they started out as – reluctant slave owner and Demoted sex slave. Now, Sascha is nowhere near as jumpy as he was originally, and Cashiel is growing more human. Their relationship, whilst not on equal footing, is developing. Cashiel allows Sascha to have more responsibilities on his projects, albeit without full disclosure. Sascha has always been smart and incredibly tech-savvy, which helped save Cashiel from further jail and also saved Sascha from an unknown but frightening fate in the last instalment.

Cashiel is still working in investment as his day job but he has far more difficult, illegal,  and important work going on in the background. His research and projects are ongoing and while he trusts Sascha, to a degree, he can’t let him in on everything he’s working on. It’s motivated by a very real fear that if Sascha is taken away or interrogated, aka torture, he will likely open up the wrath of his mother and the political ramifications involved. The problem with someone knowing half-facts is they can be in more trouble than knowing them all. When you’re an attractive and desirable (ex sex) slave there is a lot more at stake, including lecherous, vicious and brutal men to deal with.

Cashiel takes Sascha out to social parties of the privileged to mingle with possible backers for his project.

Maybe it’s more accurate to say that I resent it, because these events are the only place where he really treats me like a slave, anymore. I accept it, though, just like I accept the third personality he seems to adopt at these events.

At one event Sascha oversteps the mark (meaning he speaks his mind) when the wealthy and powerful Oliver Torenze is there and Cashiel is made to punish Sascha in front of Torenze. If he doesn’t do it the demanding and brutal Torenze will. But Sascha doesn’t know this, doesn’t know who he is, which causes their growing but fragile trust to take a big leap backwards.

I don’t know what to do or say. I stand there for a few minutes, taking note of the bruises that are visible even in the dim light from the hallway. I did that to him, and he doesn’t even know why.

He works hard and keeps the house in perfect order. He acts like the perfect slave, but I don’t want the perfect slave. I want Sascha, the Sascha who was starting to come out of his shell, the Sascha who used to melt under my hands. I watch him at home, when I think he’s not looking, but all I see on his face is hatred and wariness. I ruined it; it is my responsibility to fix it.

an alternative to the brutal Miller (Demoted) System and the complexities of the fact that Cashiel is the founder’s son. That he’s already been caught before by his mother and punished. That Sascha became Demoted to protect his Twin brother, Abriel. The growing affection and sexual heat between Cashiel and Sascha, and it is hot. Trust – the little secrets that are withheld because of a lack of equal footing between the primary characters. No matter how much Cashiel and Sascha are falling, and they are, Cashiel still owns Sascha. The reality that one could end in jail (again) and the other dead or, worse, tortured – because in this futuristic world there are worse fates than death.

This series is very emotive and character driven, and those aspects work beautifully. The one thing I will say I missed was the research being extrapolated on. I need to really know why wealthy members of society are prepared to back a new system that is treasonous and flies in the face of one that clearly benefits them – free labour, state sanctioned slaves to do with as you see fit. One thing that was made patently clear was why Cashiel could be so driven to want this change. Mind you, he does not want the Demoted replaced, simply a kinder system put in place than the Miller System. As disconcerting as that sounds, it’s small steps that make behavioural  sense for his character. While Cashiel may want one system, it appears Sascha would like another and I hope that the author gives us a bit of a tussle on that point because it’s important.

If you haven’t read Subjection it doesn’t matter as there is a bit of an info drop at the beginning to catch you right up. Once the book kicks into gear it is one heck of a ride. The chemistry between Cashiel and Sasha is heating right up. I have to say that Cashiel’s inner thoughts start our clinical but are more and more touching as the book progresses. It 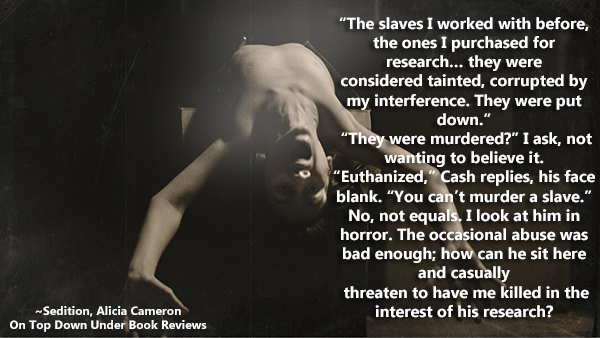 doesn’t mean that he can always protect Sascha or does and says the right thing. He doesn’t, but he just kept getting it more right than wrong as he thaws. Likewise, Sascha is invested in having a purpose that is personal. He willingly puts himself into situations that will help the research gain funding and backing. Believe me when I say that it’s at great expense both emotionally and physically but he wants to make a difference the best way he can (overtly) in this current system; given his status.

It seems that the only weapon I have against Torenze is myself, my body, and I’m willing to put it on the line to shut him up.

Sascha also gets to meet his brother, Abriel. It’s something he didn’t believe could ever happen after the Assessment and being demoted. I felt for Abriel, it seems not only the 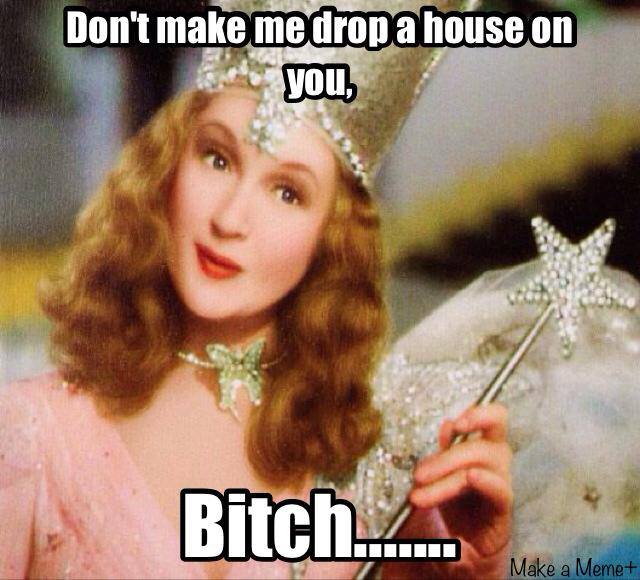 Demoted are a slave to this system.  His wife and three year old daughter – Sascha’s SIL and niece –  are something else. There are some god-awful characters in this book made worse by the fact that they are so damn real. You know them, nasty rich men and women who wield corrupted power with the force of a blunt object to the head. Hiding behind political platitudes and protection. Lisa, Sascha’s SIL, believes she is more important than she is and links up with Kristine Miller – two bitches I would like to see a house dropped on. I’m collecting a shitlist in this series and want to see a few people taken down a notch or ten. Hey, I like the movies Payback, Taken and Kill Bill, and I want some vengeful payback in this series.

When things start to look good for Cashiel and Sascha the rug does get pulled out, whether that be Kristine Miller always spying on her son, invading his space, trying to stay one step ahead. Or using Cahiel’s obvious feelings for Sascha to instill fear. Then there’s the brutal Oliver Torenze who Cashiel needs involved in his project, both financially and to help garner support from other potential backers. You learn that Torenze was the right hand man of Miller’s in the re-education centres before Miller disposed of him. So he has an axe to grind and a lot of money and influence which Cashiel believes will be enough to have Torenze on board. To say that Oliver Torenze makes your skin crawl is the biggest understatement of the year. The sadistic Torenze makes it clear in his smarmy, heinously creepy way that if he is to support Cashiel he wants ‘time’ with Sascha. Warning coming. The section with Sascha at the hands of Torenze is nasty. Very nasty. You really need to be okay with slave-fic and base humiliation to read the series and to deal with Torenze’s predilections and ideas of a fun time. My mind is running Payback as I type this.

Naked, beaten, and handcuffed, I can’t help but think that Sascha is the bravest person I have ever seen.

The second instalment of the Demoted series is better than the first. Where I felt more of a 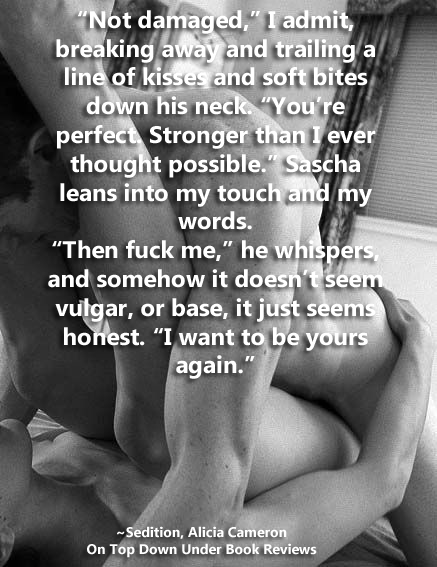 distance from the characters in Subjection, particularly Cashiel, I had no such issues in this book. I’ll go so far as to say that while Sascha is still strong, has amazing resiliance, and is easy to love, Cashiel caught right up, in my mind. He’s so protective of Sascha, trying to throw the shackles of his toxic childhood aside. Dealing with the bitch extraordinaire that is his mother. I do love to see someone grow. He’s still flawed but he’s nothing if not incredibly interesting.  The emotion and connection were what I was looking for and I absolutely got it in Sedition. The sex is red hot and in a slave-fic book that can be a very hard line for an author to tread. Research aspects not quite fully fleshed out aside, I am a huge characterisation reader so that sealed it for me. That along with the threads of the plot all weaving together bit by bit. The book does finish on a cliff hanger and I’m just about to pick up book #3 because I need to know what’s going to happen. I am that invested in these guys and their story I can’t read anything else until I have seen what eventuates for Cashiel and Sascha. 5 Stars! 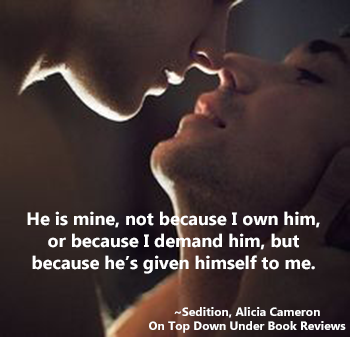 Our Tumblr page for extra zing

Because of your review, I feel as if I’ve been dropped into this world and that of the characters. I remember how much you enjoyed the first in the series. It says a lot about the writing when you enjoy the 2nd one even more.

Fantastic review. The quotes, pics, everything. I love the Glinda meme. 🙂

Oh gees, don’t get dropped into this world. It hurts 🙂

I knew you’d appreciate the use of Glinda and the word “bitch,” he he