Hunter Adams is hopelessly adrift after college. He’s still a virgin, can’t find a real job, and has no clue what to do with his life. In desperation, he returns to his humiliating old job as an elf at the Santa’s Village in his hometown’s dying mall. The Santa on the job is an unexpectedly sexy lumberjack, twice Hunter’s size and age. He makes Hunter feel very naughty—too bad he’s grumpy and intimidating.

Years after the tragic death of his partner, Nick Spini has his beagle and long, hard days on his Christmas tree farm. That’s plenty. But he can’t refuse a loyal friend’s plea for help and finds himself filling in as Santa at the local mall. Despite Nick’s attempt to stay aloof, the beautiful, anxious young man playing elf brings out his long-dormant daddy instincts.

When a surprise blizzard traps them alone in Nick’s isolated forest home, their attraction burns even brighter. Will they surrender to the sizzling connection between them and find the release and comfort they crave?

Hunter Adams is back in his hometown of Pinevale, Canada, to fill in as the elf to Pinevale Mall’s Santa and 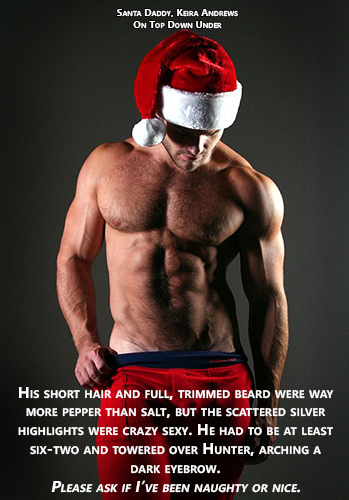 the Christmas photoshoot. He really doesn’t want to be doing this all over again but John, the mall manager, is fair and a good guy. Hunter needs the money. Internships in Toronto haven’t yielded a paying job and with English Lit as a major he’s competing with others for the few entry level jobs out there. After this and Christmas at home are over, he’ll go back and try again.

Nick Spini is the last minute replacement for Santa. The original broke his leg and Nick and John are good friends so he grudgingly agrees. He runs a Christmas tree farm on the outskirts of Pinevale and since his partner Eric died eight years ago, he’s been all but reclusive. Sure he picks up the odd guy for sex, but he doesn’t have to connect with them.

Hunter thinks the mall Santa is hot as hell, although he’s grumpy and a bit of a dick about him being slightly late on the first day. He seems so disapproving and Hunter has had enough of that already. Still, it’s a paying job for two weekends. Beggars can’t be choosers. Besides, once Nick warms up to it he’s nice to the children who are asking Santa for presents and having their photos taken. Hunter likes older men and this whole lumberjack Santa vibe that Nick has going on is nice scenery in an otherwise stuffy, rundown mall and the end to a basic year.

Nick has some preconceptions about Hunter which I didn’t appreciate, but after he pulled the stick out of his arse, and that had to happen twice, he was a good guy underneath. You can’t stay too mad at someone who has a reason for feeling and reacting like he does. He also has a dog, Ella, who he loves and who is a nice softener to Nick’s attitude early on, a cute inclusion to the overall story. I also liked how Nick heard and knew what his ex would be thinking or saying in his head when he needed it, telling Nick to pull his head in, encouraging Nick to get back into life.

Eric had always called him on his shit, and eight years after his death, his voice in Nick’s head was a familiar comfort. It wasn’t real, of course, and it wasn’t always there. But Eric would show up once in a while, usually when Nick needed a swift kick up the ass.

Nick and Hunter get a chance to be together when John suggests that Hunter work out at Nick’s tree farm because it’s the busy season. It solves two problems – Nick getting the helping hand he needs and Hunter getting continuing pay, but we all gleefully know where this is going. Snow fall, Hunter having to stay over. Oh dear… 🙂

Oh yes, this pretty boy wants you. No doubt about it. What a shame you’re trapped here together in such terrible weather with nothing else to do…
Nick could imagine the light in Eric’s brown eyes and his mischievous laughter.

Hunter was a lovely character from the beginning. You can’t help but like him and Keira Andrews injected a 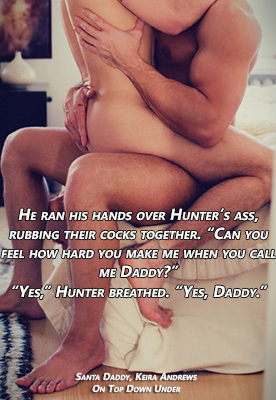 lot of heart into him. You also can’t help but hope he gets what he wants, which is something to work towards, and Nick. So naturally I wanted him to have those thing too, it’s Christmas after all – and that Daddy kink was nice to read. Mmm hmm.

The secondary characters all had life breathed into them as well – John, Hunter’s mum, they were well rounded with so little page time. It’s really well done. The author made every word count.

There’s some great Daddy kink in this story, it’s what I hoped for going in. That title had my ears pricked up and Keira Andrews delivered. Daddy Kink is like crack for me, and this was really well written ‘crack’. The substantial age difference – Nick is forty-six to Hunter’s twenty-three – and the virginal Hunter added another layer and an authenticity to the kink as well.

This really is a sexy novella. Smokin’ hot.

“Now bring your arms back. That’s right. Hold yourself open for me.”
Hunter’s fingers trembled, but he obeyed beautifully, reaching back for his ass cheeks and spreading them. “Like this, Daddy?” His cheek and shoulders rested on the bed.
“Yes. That’s perfect, baby.”

Santa Daddy is one naughty ‘n’ nice, spicy nip of a Christmas tale with a nice story and a great deal of heart. If you enjoy Daddy kink, even if you don’t but you like sexy, go grab a copy when it’s out. Joyous and hot  (holiday) reading. 4.5 Stars!

You had me at age gap and Daddy. 😉 I love a cute and sexy Christmas story. You know I’m ALL about the age difference. While Nick seems like a stick in the mud in the beginning, I love how his late partner puts him in his place, so to speak. I know I’d adore Hunter. He’s my type of character.

Great review. I LOVE the visuals and the quotes. I do love a naughty Santa. 😉

I know, right? An age gap and then add ‘just call me Daddy’ to the mix and I’m sucker if it’s well written, which this is.

Thanks, Cindi, I didn’t have the time but I could have gone very porny with the pics and quotes. Next time 😀