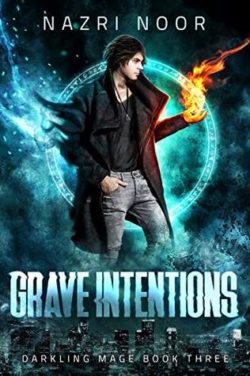 Something has stolen the darkling mage’s face.

Reports of arcane theft and violence are pouring in from all over Valero. They all have one thing in common: a perpetrator who looks exactly like Dustin Graves. But Dust has been hanging in the hideout, barely out of sight of his bloodthirsty companions.

An impostor is clearly on the prowl, and soon a vampire clan, the Lorica, and even Dust’s own allies are giving him hell for crimes he didn’t commit. There’s also the matter of finding an entity powerful enough to reforge Vanitas. But the darkling mage will pull through. Dustin always does. Well… except when he doesn’t.
​​
​If you like snarky heroes, snappy dialogue, and a bit of grit and gore, you’ll love the third book in Nazri Noor’s series of urban fantasy novels. Explore the Darkling Mage universe and discover Grave Intentions today.

Dustin Graves is settling into life working under Carver with not only Gil and Sterling but Asher as well – the necromancer they rescued/retrieved from the Viridian Dawn cult in Dark Harvest. Their team is growing. However, there’s also unsettled feelings around Dustin. Vanitas is in pieces, his sprit missing. He perceives Carver to be less interested in him and his burgeoning capabilities and more interested in Asher’s. Sterling seems a bit snarkier, the reality is that’s just Sterling, Gil has hooked up with Prudence, and Bastion is more than his usual level of angry. Then there’s the fact that Dustin is missing his father more than ever, his need to find where he is becomes ramped up even though it goes against the Veil. He would just like to see him again, to let him know he’s still alive, although alive is a relative term.

On top of the above, Dustin seems to have pissed off a bunch of vampires and their blood witch leader, 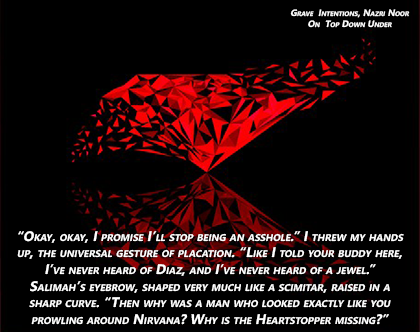 Diaz, for reasons that make no sense to him. Diaz wants the Heartstopper back that Dustin stole from him. While Dustin is a thief of the arcane on behalf of his employers, first it was the Lorica and now it’s Carver, he has no idea what the Heartstopper is let alone actually stolen the object.

It turns out that Dustin is angering a lot of powerful people, and not just for his usual mouthy tendencies and his ability to freakishly shadow step. It’s because someone that looks exactly like Dustin is stealing possessions that powerful beings aren’t impressed about. A number of the arcane objects stolen belong to dangerous people, family of magical people he knows in some capacity. None of it makes sense until Dustin thinks of the one being who has the most to gain from upsetting him and his precarious balance over this side of the Veil. Could it be them? Or are there are other dark forces at play?

Grave Intentions has a few ongoing arcs, Dustin’s increasing need to seek out his father. His foot in two camps so to speak – the Lorica originally and now Carver’s crew. His desire to restore Vanitas at all costs. Dustin’s major talent of shadow stepping is getting more advanced and is an overarching theme of the series, as is the fact that there are latent talents he possesses that are only having their surface scratched right now. It’s frustrating for him to not quite reach the potential that’s expected of him. Carver is a litch, Sterling a vampire, Gil a werewolf, Asher is a necromancer, so their abilities are easily accessed and clearly defined, Dustin’s are ambiguous outside of the Dark Room, which becomes more involved and darker in this instalment, as does his steadily growing fire skillset.

My love of Sterling grows, he and Dustin bounce off each other so well. He made sure to drop that he had tasted Dustin’s blood, it’s nothing exciting but he likes to stir the pot – especially if it gets a rise out of Dustin or others.

“No. No.” Madam Chien shook her finger for emphasis. “You stay here with me, with Prudence. You help me clean up, close shop. Blood boy and his boyfriend can track down the peach.”
“I swear nothing’s happening – ”
“Come on, sweetheart,” Sterling trilled, slinging an arm over my shoulder. “Let’s go kill your doppelganger.”

I love how Dustin’s friends are loyal and like family, but that’s especially true of Sterling. I had the fright of my life in this book. Let’s just say some Kindle throwing nearly happened over Sterling. I will cut a bitch if anything happens to Sterling, it’s bad enough I’m missing Vanitas.

A demon possies himself into this book amongst the gods – Mammon, the demon price of greed – and now he wants a piece of Dustin too. The 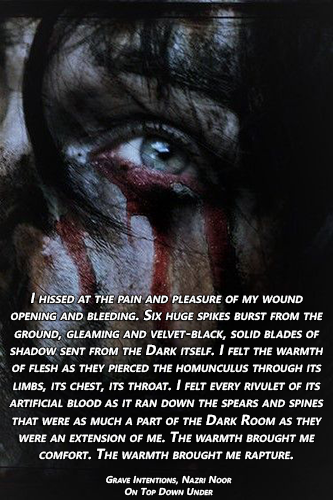 entities or gods of the previous books make appearances, including Hecate, Amaterasu, who brings her brother Susanoo. This pair do not like Dustin. He manages to keep on the front foot while they throw plenty at him. The wonderful Arachne pops out to play, with her eyes everywhere. Her teasing use of the word ‘sweetling’ for Dustin is awesome. She does have a soft spot for him. Plus Arachne certainly appreciates a fine looking young man. I love her spy spiders. However, there is only so much a god will do for you without something being expected in return, sweetling or not.

This book has a darker tone than the previous books. Dustin feels a bit unsure of his place in this arcane underground he finds himself in the thick of now, in the Boneyard, the space that Carver’s crew live and hang out in behind Mama Rosa’s Filipino restaurant. Speaking of, Asian cuisine is almost a secondary character in this book. Maybe it’s because I love it so much and noticed,  but I think it’s more because it’s used quite a bit in the background… when people meet up or they need food or comfort.

Dustin starts out with the usual snark and while that never goes away completely, his overall demeanour and mood is shadowed. I can’t say much more because it spoils the story but let’s just say the homunculus  don’t help.

This is a good series. There’s always plenty of action and good world building in each book, and a bit of gore, and previous characters pop in. Herald plays a more important part this time around. Dustin is still a work in progress but I enjoyed seeing more emotion from him. I liked the multi-faceted aspects of his nature creeping out. I understand snarky and snappy retorts help him process his life now, that’s Dustin, but I always expect layers of emotional depth, and much to my delight it’s developed more in book #3. I also like my UF with more kick, some more darkness, and Grave Intentions delivers. Definitely recommended for lovers of UF who enjoy good writing and a developing series they can get behind. 4.5 Stars!

That second photo is awesomely creepy, as is the quote you used. I love it.

I know how much you love dark. It looks like this delivers. I can tell this is an amazing series that gets better with each new installment.

Ha ha, I think I might like Sterling. I definitely like the way he bounces off Dustin. He likes to stir things up and he’s loyal too.

I also like that pic and quote, it’s a good snapshot of the book. This could go considerably darker and I’d be more than fine with that, in the meantime, it’s a nicely written series 🙂