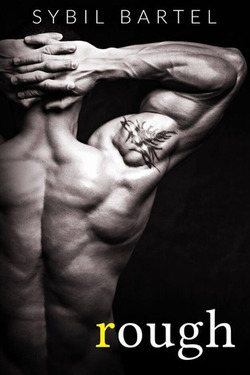 I’m not your boyfriend. I’m not the guy next door. I don’t even play nice.

My hands twisting in your hair, my whispered demand in your ear—I’m the fantasy you’ll wish you never had.

When I’m through with you, every inch of your body will know where I’ve been. Your only thought will be the insatiable ache between your legs as my name drags across your lips. You won’t crave more, you’ll beg for it. Because I’m not just a cocky smile with military hardened muscles you paid five grand for—I’m the experience you’ll never forget.

One night with me and you’ll know exactly why women pay me to be rough.

I’m starting out the new year with a few books that are different from from my so-called norm. I’ll get back to normal with my reading/reviewing soon, including those promised to authors. I’m out of town and am holding off on those until I get back home and am able to concentrate fully.

A few months ago I stumbled across Thrust by Sybil Bartel. It was not my type of book but I bought it anyway. The blurb was a little much – don’t let the ‘ten inches of real estate’ keep you from checking it out – but the cover was hot so I one-clicked. I’m glad I did. It even made my books of 2017 list.

Rough is book two in the Thrust series. Each book in the series is centered around a former Marine who is now a high-priced escort. Each character escorts for reasons that come out in their individual story.

In Rough we meet Jared.

Like the title suggests, Jared likes it rough – as do his clients who pay him a hell of a lot of money for a few rough hours in bed. Unlike Alex Vega in Thrust who’s more of a pretty boy (but still a tough ex-Marine), Jared is a bad ass through and through. He doesn’t play nice. The women who hire him know this, which is why they keep coming back for more. When Alex found love with Olivia, he pawned his clients off to Jared and another friend, Dane. Alex sends the info of three of those clients to Jared, all of which are scheduled for different times on the same evening. At five grand per client (minus a percentage that goes to Alex), Jared will make out pretty well for having sex with three women that night.

We had a system. Vega took the tame ones, I handled the kink, and the overflow went to our marine buddy Dane Marek, that crazy fuck. That’s how it worked. That’s what we’d done for three years. We all made bank, and we all stuck to the system. Until now.

The time with the first client goes well enough. The second one, however, isn’t quite what Jared is expecting. Sienna is an assistant for the coach of the Miami Dolphins football team. She gets paid very well and can easily afford the $5,000 price tag for a night of no-strings sex. She’s not exactly who you’d picture hiring an escort. At the joking suggestion of a friend, she’d secretly hired Alex right after she discovered that her loser quarterback boyfriend was cheating on her. The photos were all over the news so there was no denying it when she called him on it. He still did – loudly – but I’ll come back to him. Sienna just happens to be one of Alex’s clients he gives to Jared. She’s hesitant about hiring another escort so she balks. Jared insists she meet him at his place anyway.

Sienna can tell almost instantly that Jared is as different as night and day from Alex Vega. Where Alex took a lot of time and care with her, it’s obvious that all Jared cares about is getting down and dirty. He doesn’t do emotions and he doesn’t coddle, regardless of how much he’s being paid. He does rough, hardcore sex, and nothing more.

As soon as Jared opens the door for Sienna he knows she’s different. So different it terrifies him. He wants her with an intensity he can’t explain and not just sexually. For some reason – after Jared goes alpha immediately after meeting Sienna – she agrees to allow him to take her to dinner. She’d already decided not to ‘hire’ him so it’s anybody’s guess as to why she went with him to a fancy restaurant. He’d even told her she was much too vanilla for him.

I pushed my hips against her ass just enough for her to feel my cock. “I don’t play nice. Or gentle.” I tightened my fist and spoke against her hair. “And you’ve got vanilla all over you, sweetheart.”

His being secretly terrified of what he’s feeling for this woman he just met has him doing some really stupid stuff not long after they arrive. This has Sienna finally getting smart and leaving.

Had I been Sienna, I’d have run far, far in the opposite direction. No, not just that. I’d have changed my number and made sure the jerk (that would be Jared) couldn’t ever contact me again.

The scene Jared causes in the restaurant in Rough was also in Thrust. While I thought it was absolutely stupid and just showed Jared’s true character, it made sense for a couple of things in the first book. It also showed that Jared was an irrationally jealous prick, but I digress. 😉

I also should point out that Jared brought Sienna to orgasm under the table at the restaurant before he caused the scene. I’m not saying it wasn’t hot but what happened shortly after really took away from it.

Strangely, even after Jared acted like a complete jealous idiot – over a woman he’d literally met moments before – Sienna is willing to see him again when he contacts her the next day while she’s at work. We know it couldn’t just be a simple lunch date between two adults. Of course not! The cheating quarterback shows up with a few of his football buddies and HE goes all jealous he-man because Jared dared take his woman to lunch. So there are two jealous guys literally fighting over the same woman. Sienna didn’t really seem to be all that, but what do I know? Apparently she had something going for her if a bad ass former marine and a popular NFL quarterback are willing to literally fight over her outside of a nice restaurant.

Hmm… restaurants seem to be a theme. 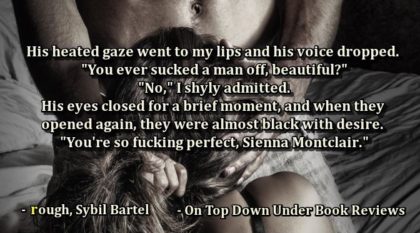 Jared physically hurts the quarterback. This is the twenty-first century so you know the fight was caught on at least a dozen cell phones. This is a scandal for Jared, the quarterback, the Miami Dolphins, and even Sienna, who gets suspended from her job because two grown men couldn’t act civil in her presence in public.

All of that sets the story up for all that happens later. Because of all the media coverage aimed at Sienna, and Jared knowing he’s responsible for it, he insists on protecting her. Throw in a lawsuit by the quarterback ex and it’s nothing but drama for Sienna.

Sex is the solution to pretty much all the problems in Sienna and Jared’s world. Well, that and Jared taking off or running Sienna off at any hint of trouble between the two of them. If Sienna dares to say something he doesn’t agree with it’s, “Get her out of here,” or he himself is leaving.

There’s more drama in the way of Sienna’s not-so-traditional family. The quarterback has something to do with that as well. Of course, everything gets taken care of and Sienna and Jared start their life together, aiming for their HEA.

While I did like the story, though nowhere near as much as Thrust, there were some issues that really bugged me.

So what did I like? I loved the rough sex, though there wasn’t as much as I’d expected going into it. I would’ve enjoyed it a lot more had it not been the so-called fix for everything, but it was written very well. One thing I will say about this author is that she can write some damn good sex scenes. And holy hell, the dirty talk. Hot!

Overall, I enjoyed this well enough. I think I would’ve enjoyed it a lot more had Jared actually shown a softer side and showed that he was capable of being the man he claimed to be instead of still showing his true colors right down to the end. There’s being protective and there’s being Jared. Also, and hopefully without giving away too much, I feel there was a missed opportunity here as far as reading disorders/disabilities that could’ve been explored more.

I’ve already started reading Grind, #3 in the series. Dane and his love interest were also introduced in Thrust. While I’m iffy about the female, I’m eager to learn more about Dane. It’s already been established that I enjoy Sybil Bartel’s writing so I’ll be seeking out more of her books.