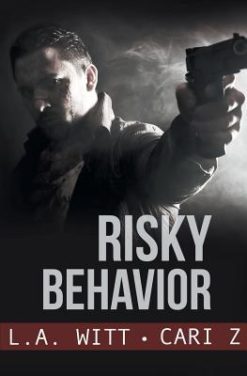 It’s day one of Darren Corliss’s career as a detective, and not only has he been assigned a notoriously difficult partner, but the guy might also be a pill-popping dirty cop. Internal Affairs needs proof, and Darren gets to be their eyes and ears whether he wants to or not.

Detective Andreas Ruffner doesn’t play by the rules, and he doesn’t play well with others. With bodies piling up and a list of suspects who are way above his pay grade, the last thing he needs is a wet-behind-the-ears kid for a partner. Or babysitter. Not even if that partner is easy on the eyes.

As Darren gains Andreas’s hard-won trust, they both realize there’s more than just mutual suspicion simmering beneath the surface. But their investigation is heating up as quickly as their relationship, and Darren has no choice but to go along with Andreas’s unorthodox — and borderline unethical — methods. As IA puts the squeeze on Darren to give up the man he’s falling for, he has to wonder—is Andreas the only cop left in this town who isn’t dirty?

As outlined in the blurb, Darren Corliss is a new detective who gets partnered with a detective a lot of others in the precinct suspect is dirty. Corliss is asked by Detective Thibedeau, Internal Affairs, to spy on Andreas Ruffner and regularly report back anything suspect, anything that could have him drummed out of the force. Ruffner’s been a detective for

over a decade, there’s not much he doesn’t get about shady people, behaviour, and detective work. He resents all the young partners he knows are being thrust upon him by IA, it’s almost a betting game how long they’ll last. Ruffner gives Corliss a hard time but Corliss is pretty tough himself – his step father was the Police Commissioner until retiring a couple of years ago. Corliss has also worked hard to get this job, and though he may be young at twenty eight for a detective, he’s not giving it up just because he has a snarky, surly, unpopular partner. He’ll also see for himself if the guy is crooked, because Thibedeau kind of strikes him as too slick and too eager to bust someone. But the often clandestine nature of Ruffner’s behaviour makes it hard for colleagues and Corliss to be sure about how (un)clean he really is.

Properly medicated, I returned to my desk and picked up my coat. I didn’t bother telling anyone that I was leaving or where I was going. Never did.

The case Ruffner has been working on has been years in the making. People found dead have links to the City but just how far up and how wide the rot goes he doesn’t know. He also has no intentions of sharing his various and sundry shady informants and means of compromising people with anyone – especially an IA lackey like his new partner is bound to be.

Andreas Ruffner may be a gruff, experienced and sure detective in his forties, but he’s pissed off a few people along

the way in a strong but suspicious career. One thing is certain, he’s unsure about close relationships. Because he’s been working a case where it seems no one can be trusted, including colleagues and probably people higher up the food chain – possibly endemic corruption – it’s made him wary in regards to interpersonal connections of any kind. He also has his own demons (for want of a non-spoiler word) that have created a myopic self-view of how much he has to offer a relationship.

Darren Corliss has a close-knit family but his older brother has early onset dementia – in his thirties – so his mother and stepfather look after Asher but they’re also there for Darren. Darren has an independent mindset for the most part, but it’s hard working with someone who’d rather have their teeth pulled than work with him, and who won’t share anything with him regarding what he’s working on. When they haul in a drug dealer and it looks like Corliss overlooked evidence that Ruffner found, Corliss isn’t sure what to make of it – is Ruffner a good detective, because he’s been a detective for so long, because he knows his way around better, or is he dirty as suspected? Because Corliss knows he did not miss the heroin at the dealer’s. The collaborative connection between the two of them, the trust, is definitely not instantaneous and they work for it.

Risky Behavior is told in alternating POV, giving the reader insight into both men and their thoughts, helping to progress the story at the same time.

There is a well paced plot. The mystery/suspense element, the case the men are working on, the professional

This was such a good book. I want writing with more substance when I read. I very much enjoy romance / love/relationships in my reading but I am over ridiculous sexual situations in books, there needs to be chemistry and there needs to be a consistent fit within the main story arc now or I’m out. This book was just what I was looking for – meaty plot, strong characters, some greying of lines, plenty of build, action, and a riveting page-turning factor. Risky Behavior is one of the best books I’ve read so far this year. Highly recommend for people who like a good police story within a romance framework, interesting characters, action, an uncertainty about who’s who and what. Plus, let’s not forget the sexy times as well. The book ends cleanly, there is no cliff hanger, and I was extremely happy and pleasantly surprised. This is the first book in what looks like being an excellent series written by two top-notch writers. I can’t wait for more. Gripping reading – 5 Stars! all the way.

This looks really good. I feel like I’d really like Ruffner. He seems mysterious. Great review. I’m loving the visuals and quotes. I can tell I’d love this.

I liked both of the MCs – different guys and both interesting in their own right. It’s excellent reading. 🙂

Great review, Kazza. I am so excited about this series. I love these types of stories and the fact that there’s an age gap between the main characters makes it even better. 🙂 I’ve only read one book by Cari Z (Friendly Fire) which I really liked and I’ve been reading books by L.A. Witt for years, so I am glad you enjoyed their collaboration. I’ve got a few other books to finish first, but then I will be starting this one.

I’m excited about this series too. Now I have about 5 or 6 series I’m keenly waiting on the next book for, so unlike me. No arguments from me, Lisa, age gaps are the best 🙂 Cari Z mixes it up and I used to read L A Witt every time she bought out a new book but I kind of fell of the trail for some reason that I don’t know. I hope you enjoy this one.
Cheers!