Release Day Post by Devon McCormack: Weight of the World

Genre Hopping: the Deranged, the Perverse, and the Love 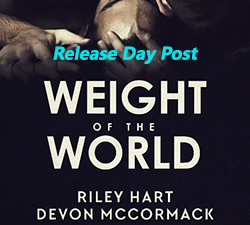 I have to hand it to Kazza and Cindi. Riley Hart and I have been writing in secret for the past few months, working on our latest novel, Weight of the World, which we are dropping on the world today. I pretty much groveled and begged to get on On Top Down Under. I was like, “Kazza, I know it’s only a few days until the release, but PPPLLLLEEEAASSEEE let us on.” And God bless Kazza, she found a way, despite having like a second to prepare for this. I don’t just have this guest post to thank Kazza and Cindi for. I don’t think there are enough thanks that I can offer to cover how much support and encouragement I have received from On Top Down Under. Kazza was actually one of the very first reviewers of my first novel, Clipped, which she loved, and did everything short of tying people up to make them read it. And the one person she did tie up, Cindi, loved it just as much. Since then, I’ve been continuously amazed and shocked by how they have been there time and time again to help me in this crazy adventure that is being an author.

In that first novel, Clipped (Book I in The Clipped Saga), God and Satan are ex-lovers whose breakup causes the Fall of Man—the beginning of a great war with God trying to destroy the world through a fiery apocalypse and Satan trying to protect it with his army of demons. The main character, a demon named Kinzer, finds himself caught up in this war and battling a gang of demons who are attempting to help God bring forth the Christ to annihilate all of mankind. Oh, now I’ve made it sound all boring, and that’s not right for this story at all. Did I mention the giant cocks? No? Oh, well, here’s the beauty of the series. Angels, being the highest and most beautiful of God’s creations, are naturally endowed with the most beautiful, and most enormous of cocks. So what does that mean? Ten inches? Thirteen inches? Well, some of them are around that, but not the angel Treycore, one of Kinzer’s allies, who drags around a two foot schlong, something that proves wildly inconvenient when he tries to have sex with mortals, which he attempts with great success several times throughout the course of the book. Since publishing the book in 2014, the novel has been called deranged and twisted for these graphic scenes—scenes that I’m still incredibly proud of. I feel I did a better job trumping my efforts at creating something dark and deranged in the sequel Bound, when Treycore journeys to Hell to rescue his mortal lover and comes face to face with the most perverse and disgusting of God’s rejected creations. What to say about those guys? Tentacles. Yup. I think that says a lot.

I’ve published a variety of books since I started The Clipped Saga. In 2015, I moved into darker contemporary works with my Bastards stories. My goal with these was to explore perversion, beginning with the novelette, Cheating Bastard, which centers around a chronic cheater and how he attempts to manipulate his partner into having a three-way with one of the regular tricks that he fucks behind his partner’s back. The follow-up novella was Lying Bastard, which looks at another sociopath—a frat boy and Archon of his fraternity. He gets his rocks off through rough sex and manipulating his peers, and when he discovers that one of his boy-toys is hooking up with his best friend, shit hits the fan. Alongside The Clipped Saga and the Bastards stories, I wrote several young adult novels, mostly paranormal. Through all these stories and the variety of genres I’ve dipped into, the one thing I have desperately tried to capture has been passion. I’ve always been fascinated by passion. In The Clipped Saga and the Bastards stories, it’s the sexual passion between the characters—characters who crave each other’s bodies in a way that is so powerful their passion becomes self-destructive. In my young adult stories, it’s the passion for living—for being free to be who they are despite the opposition against them.

Now, with this latest novel, Weight of the World, I’m entering into a new genre, gay romance, where I am eager to explore passion in an entirely new way. Zack stands on a roof one night, planning to end his life, but another man who happens to be on that same roof talks him out of it. The next day, Zack learns on the news that the man who talked him out of suicide jumped himself. He’s totally thrown by it, and he needs an answer for why he did it. He goes to the only person he thinks might have answers, the man’s brother Tommy. He hopes Tommy might have a letter or know something about why his brother jumped, but he’s just as confused as Zack. Together, they search desperately for answers that don’t come easily, fearing that they may never know the truth. And very quickly, they find moments of ease when their together, fucking in hopes that they can at least have a moment where they forget their pain.

In Weight of the World, the passion between the characters begins as sexual, but builds into something much deeper very quickly. However, unlike my previous works, the book isn’t about saving the world from annihilation or about manipulating partners. And it isn’t just about fucking

each other’s brains out (not that there’s anything wrong with that, and not that I don’t plan on writing a lot more stories about just that). It’s about a relationship. About how two people come together. Discover each other’s insecurities. Their hopes. Their passions. And how those things lead them for a deeper appreciation and understanding one another. Of course, that isn’t to say that there isn’t some hot sex because, believe me, these boys have plenty of hot sex, but their relationship is so much more than that, and it was so much fun to explore that in a way I hadn’t previously.

I enjoy floating between genres because I find that each one gives me something different, allows me to tap into something within myself in a unique way. Of course, as I am starting to promote this romance novel, I’m simultaneously trying to figure out how to keep two characters from killing each other on sight in my third book in The Clipped Saga and what to do with my latest bastard who has sadistic plans for the victims in the third story in the Bastards series. So many worlds and genres to explore and never enough time to explore them all in. So that said, I do need to be back to my writing cave, where I will work on the next project to life. In the meantime, I’m eager to introduce you to the latest project—a book I’m incredibly proud to have been a part of. I hope you’ll check it out and enjoy the read! Thanks for stopping by today. 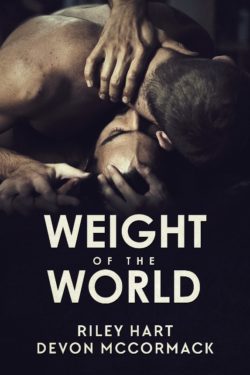 Zack lost his job, his apartment, and his hope, which is why he ends up on the roof of a high rise, certain that one final step will solve his problems. But a mysterious stranger named Rob happens to be on the roof that night too. He talks Zack down, convincing him there’s still hope left in the world. Zack thinks maybe he’s right, which is why he’s shocked when he turns on the news the next morning to find out Rob jumped himself. Disturbed and confused, he searches for answers, starting with Rob’s brother Tommy Rayburn.

It’s been Tommy’s job to take care of his brother since they were kids, taking the blows from their father so Rob wouldn’t have to. Tommy thought he could protect him, even if it meant carrying the weight of the world on his shoulders. Considering Rob threw himself off a building, he obviously couldn’t.

Then he meets Zack, a friend of Rob’s who’s suspiciously evasive about how they knew each other. But they’re both grieving and determined to find out why Rob jumped. Answers don’t come easily and soon, they’re soothing each other with sweat-slicked, passionate encounters. Hot as things get in the bedroom, it doesn’t take them long to realize there’s more between them than mind-blowing sex and their pain. But the heaviness is still there, threatening to pull them under, and if they can’t open up with each other to lighten the load, the weight just might be enough to crush them both. 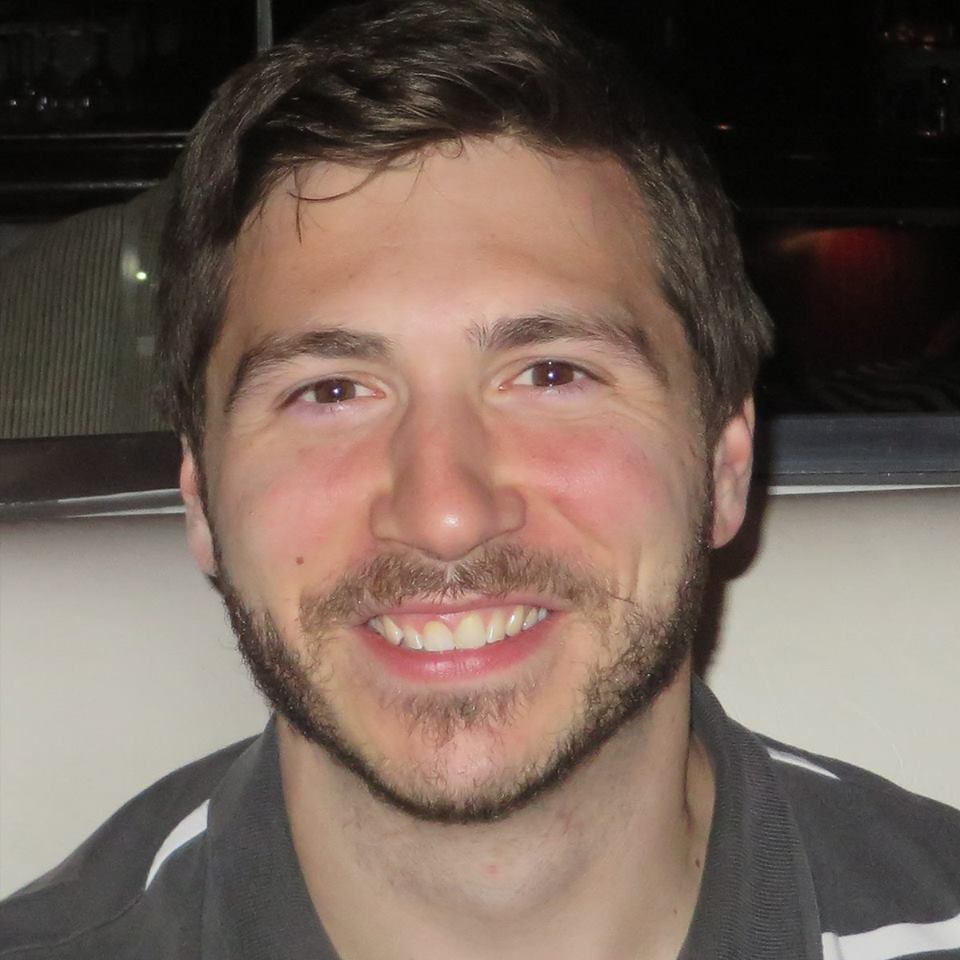 Devon McCormack spends most of his time hiding in his lair, adventuring in paranormal worlds with his island of misfit characters. A good ole Southern boy, McCormack grew up in the Georgian suburbs with his two younger brothers and an older sister. At a very young age, he spun tales the old fashioned way, lying to anyone and everyone he encountered. He claimed he was an orphan. He claimed to be a king from another planet. He claimed to have supernatural powers. He has since harnessed this penchant for tall tales by crafting whole worlds where he can live out whatever fantasy he chooses.

A gay man himself, McCormack focuses on gay male characters, adding to the immense body of literature that chooses to represent and advocate gay men’s presence in media. His body of work ranges from erotica to young adult, so readers should check the synopses of his books before purchasing so that they know what they’re getting into.

Congrats on the new release, Devon! Weight of the World looks fantastic. 🙂

I remember when Kazza recommended Clipped to me way back when. I was nervous about reading it because she enjoyed it so much. What if I hated it? I needn’t have worried. I’ve enjoyed every one of yours I’ve read since.

Thanks for stopping by and congrats again!

Thanks, Cindi! Here’s hoping you enjoy WotW as much as you have the other stories. And thanks again for all the support and encouragement over the years. 🙂

The tying up of people may not have been to do with Clipped, Devon. I just like that sort of thing, mwahahaha 🙂

Hahaha. True story, Kazza. Thanks for hosting me and for the awesome review of WotW. I appreciate it so much. And like I said with Cindi, just thank you so much for all the support and encouragement throughout the years. 🙂

Congrats on the release. It sounds like a lot of what I love in one book. Gimme hurt and comfort! 🙂

Oh, we got plenty of hurt and comfort for you, Julie. Hope you get a chance to check the book out. 🙂

Your writing cave sounds like a fun place to hide out and write. I need my very own writing cave for my writing inspiration. WotW sounds exciting with hot and sad man love . Thanks for a fun post. 🙂

Weight of the World is so good. I hope you grab a copy. Devon always has a fun post or something really worth reading. Good luck with your own writing, Tina, if that’s what you’re doing, and I hope you get that writing cave too 🙂