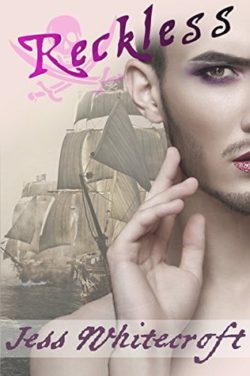 When pirate Henry Dyer’s ship captures the French frigate Sans Souci, nobody seems to know why Captain Buckler has been chasing such a neglected and unprepossessing prize ship. The puzzle only gets more perplexing when they take the ship and find an English girl in leg irons.

It’s an old and popular love story – the pirate and the virgin who steals his heart away, only this time the pirate is the virgin and the girl isn’t a girl at all. She is James ‘Jem’ Exley, thief, molly, occasional actor and full time transvestite. Jettisoned to the New World in order to spare his aristocratic family any further disgrace, Jem is glamorous, flamboyant and fascinating to Henry, a former quiet country boy who became a pirate when his merchant vessel was robbed.

At only nineteen, Henry is determined to prove himself a man one way or the other, and is astonished to find that nothing makes him feel like more of a man than his increasingly reckless passion for Jem. As their love leads them into trouble, the mysterious circumstances of Jem’s capture lead Henry deeper into a mystery that not only upends his whole world, but sees them running for their lives across the Caribbean.

Stolen jewels, scheming Captains and devious drag artists collide in this steamy eighteenth century romp from the author of These Violent Delights and Going Sasquatch.

The prologue for Reckless starts in 1707 when eighteen year old the Honourable James Exley is sent to renowned London thespian, the toast of Drury Lane, David Manox to help James with his speech impediment. Sure, Manox can help, but he has other ideas. He’ll teach James how to play pretty women on the stage – after all, James makes a gorgeous last minute stand-in Helen of Troy for their production of Dr Faustus. He’ll also teach him how to fuck men and fall for an older man. It’s an eye-opener. But, you know how it goes, the course of (first) love does not run smooth. However, James does find the stays that cinch his waist to 18 inches help with his stutter. Besides, dressing as a woman, for all its original shock value, becomes comfortable and saucy. It becomes a salvation.

Jump forward to 1712 and pirate ship the Thetis is tracking French frigate the Sans Souci, and nineteen year old Henry Dyer is wondering why they’re after that frigate at all. She’s probably weighed down with a lot of armaments and she’s a rather basic ship with nothing onboard that will be worth the effort. He feels that Captain ‘Buckler’ Buchanan has a better second ship in the Reckless that’s currently under a carpenter refit. He’s also thinking how money bagged by fellow pirates, some would say a king’s ransom, doesn’t last long in their hands, so this chase and capture actually needs to be worth it. The Sans Souci offers a potential for weapons that can be on-sold, but it seems laborious and dangerous for no easy return. When they board there definitely isn’t much of anything to be sold, but Buckler is ready to risk life and limb in the skirmish. All they end up with is a so-so ship and a sparrow of a girl in legs irons with a very expensive watch. The watch has an inscription – ‘to my sweet Jenny. From Papa’. Jenny claims that her Papa in Port Royal, Jamaica, will pay a sizeable ransom upon her safe return. Jenny’s immediately protected by Captain Buchanan, with strict orders not to touch her. She’s a cash cow once they hit Jamaica. The watch she’s somehow been holding is worth a small fortune, so Papa must be rich and Buchanan aims to capitalise.

Jenny is quiet in the beginning but as they sail toward Jamaica, she and Henry get talking more and more. Henry is attracted to her but it’s odd because no girl has ever interested him previously. No matter how much he’s tried and wanted to desire a female he’s always left wanting men. Although Henry has a reputation as a ladies man – whenever the crew hits port Henry is seen in and out of the local brothel – the reality is that Henry helps a number of the working girls with math so they don’t get ripped off. They like him and don’t want the Madame to know, it gives him a cover. So everyone keeps mum about the arrangement. There is something different about Jenny, however. She may be a proper lady but the way she uses her eyes to once him over, her sweat, seems like something’s not quite right… but it doesn’t quite register at a fully conscious level.

For all she’d picked up a needle and bent her head and looked like a girl in a painting that might hang in a gentleman’s house, there was still something wrong about her. Something soiled and exciting that had no business lurking behind the eyes of a well-bred young woman.

Pretty soon Henry starts dreaming about Jenny, but they always end with her having a cock under her dress. Which, intriguingly enough, turns out to be spot on. Jenny is spectacularly outed one day onboard, and James Exley, who now goes by the name of Jenny or Jem, mostly Jem, is no longer able to hide behind the disguise. Buckler isn’t too impressed with ‘Sweet Jenny’ anymore. He wants Jem tossed overboard, but Jem says he can help Buchanan with an assignation in Port Royal that Buckler doesn’t want any of his crew to know about. Jem is on his A game when it comes to quick thinking and a con.

Henry and Jem are wildly opposite characters who fit beautifully together. While Henry initially struggles to allow 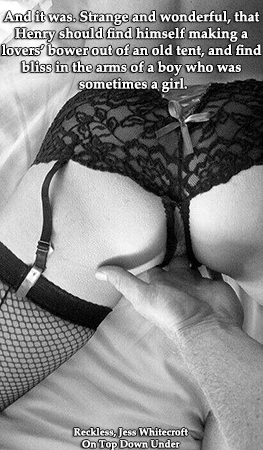 his feelings out for another man, Jem makes him realise you love who you love. Jem is acutely aware of his desires and that life is too short not to live and love on your own terms, and as much and as often as possible. He also likes wearing dresses and women’s smalls and having his hair long and coloured at times. And then there’s the fact that Jem is incredibly resilient, quick on his feet and street smart. But he’s tempered by Henry’s even-keeled outlook, his passion for the sea, his actions, his overall demeanour, his ploughboy looks and body, his increasing acceptance of Jem just the way Jem is. Henry was raised to be part of the church and as such is quite well educated, James is also well educated because he’s originally from a titled family. Despite their youth, understanding ‘youth’ is relative to the time period, they are no one’s fools. Henry’s journey to being a pirate wasn’t expanded upon too much, just enough for the reader to understand who he is and why. Jem is a survivor, and sassy and shiny.

The two of them, the writing, makes you feel like you are there, that trouble or death could just be a ship, an illness, a decree, or sexual liaison away for them both. Not to mention there is a mystery also going on in the background – I’ll leave that alone for any potential reader to explore. What Jem and Henry achieve personally and together in the book made me smile. It’s fiction but it has such a genuineness about it. Jem and Henry made me want the very best for them, to know that their love could last as long as possible. They leap off the page because of who they are, and because there’s a palpable chemistry between them.

Okay. Update to my original review. I wasn’t certain about the interchangeable use of Harry and Hal for Henry in Reckless. I’m not going to say that I didn’t ponder on it – whether it was an accident or something I wasn’t aware of. Someone in the know helped me out. Apparently it is correct for the period. So my question of – “Maybe there is a historical context I am missing? – was, in fact, headed in the right direction. It is relevant and it is culturally and period correct. Hope that helps my fellow readers out too. 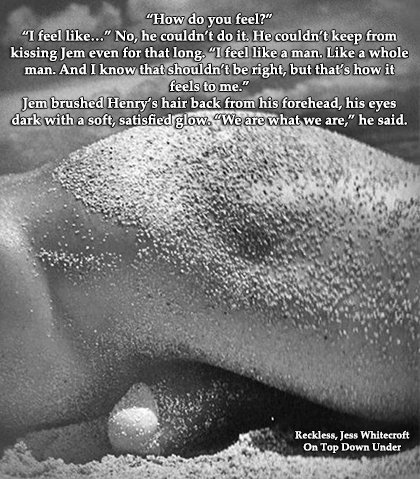 It’s the little things that make up the sum total of anything in life – including reading. There is so much I can’t put into words that make this such a lovely book. Why the author is very good. Little phrases and actions and moments are golden. This quote, for example, had a huge impact on me as I read. It’s in relation to events regarding sailing and also when Jem is ill, Henry’s meaning – because the sea and Jem become everything to Henry. Without the right context the emotion is lost. Still, I had to add it.

Sleep dragged at him, until he couldn’t hold his head above it any longer, and he sank thinking that it would be all right. He’d just sleep under the surface, ready to wake when he was needed.

I was telling a friend the other day that Jess Whitecroft’s writing is like published crack for me. I’m addicted. Doesn’t 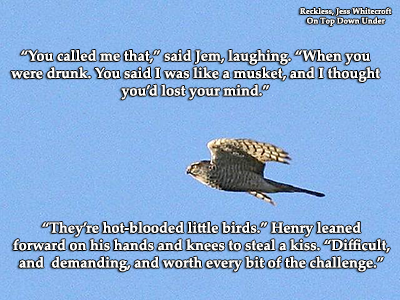 matter whether Bigfoot is cutting lose, politicians and journos, ballet dancers and professors, rock star addicts and a friend’s younger brother, or drag queens with attitude and sandwiched in a ménage fill up the pages, Jess Whitecroft makes them all come alive, speaking to me in some way or another. The various backdrops and circumstances surrounding characters in every one of her books are always intriguing as well. In Reckless, Whitecroft mixes her writing up yet again within genre, this time opting for the early 1700’s in and around the Caribbean. Jem, a twenty three year old cross-dressing molly, thief, and habitual liar, and Henry, a nineteen year old, sun-kissed, virgin pirate – how much gold is in that sentence? – find each other in the most unusual of circumstances and places. And it works in a rollicking good way, oozing adventure, romance and love. Henry and Jem. Jem and Henry. No matter which way you say their names, this pair have a wonderful chemistry. And, if you care to listen, they have a fantastic tale to tell you as well – 5 Stars! 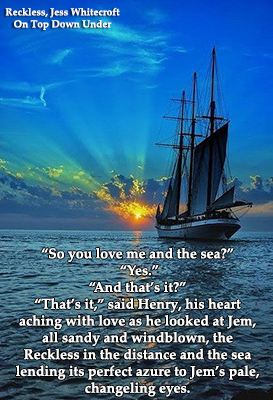 “Jem, a twenty three year old cross-dressing molly, thief, and habitual liar, and Henry, a nineteen year old, sun-kissed, virgin pirate – how much gold is in that sentence? – find each other in the most unusual of circumstances and places.” <--- That would've sold me on the book even if the rest of your review hadn't. 😉 And those visuals are amazing. I know how much you love this author's work. It's good to find an author who entertains, regardless of what each book is about. Fantastic review.

That’s right, screw the meat of it all, let’s go straight to the gold 😀

It was such an enjoyable book. Jess Whitecroft is fantastic at entertaining, no matter the era or the characters. I’m struggling finding new-to-me authors that appeal now but Jess Whitecroft came along last year (I believe it was last year) and has nailed it ever since.

Thanks, Cindi, I hate trying to find pics for quotes for gay or queer historical books – eesh, difficult – but I like these 🙂