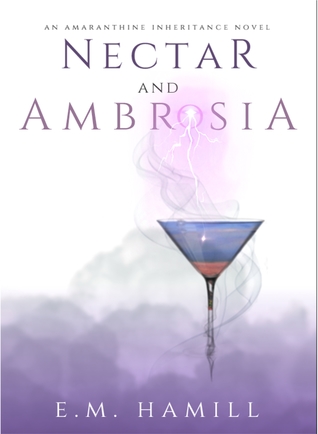 Callie, a Classics major, flees home to protect her family from a monster straight out of mythology. Visions lead her to Nectar and Ambrosia: the weirdest pub on Earth, where inter-dimensional travelers with attention seeking issues get drunk in between the A-list celebrity lives they create. They can’t pretend to be gods anymore—not since a treaty with the current Supreme Deity promising they won’t intervene in human affairs.

The Doorkeeper of this threshold, Florian, rides herd on the rowdy Amaranthine and offers her shelter and a job. Callie likes the lonely, mysterious bartender more than she should. For Florian, her presence is a ray of light in the gray monotony of his sentence behind the bar, but he keeps a cautious distance—the truth of how he became Doorkeeper could change Callie’s perception of him forever.

When angels show up for a war council over Zeus’s irrational mutters about a comeback, Callie has uncontrolled visions of an apocalypse. Ex-gods realize she’s the first Oracle Priestess in generations. All Callie wanted was keep her parents safe, and now it seems she must sacrifice her future to keep the rest of humanity safe, too. Ambrosia could be the key to harnessing her visions— or it could cost her life.

War is coming. The threshold between worlds has never been more fragile. Callie must discover who is pulling Zeus’s strings and avert the final battle—before the immortal vying to become the next Supreme Deity kills her first.

“Commiseration turned into drunken stupidity on my part. I told myself it served Ares right. I asked her for protection, and from that night on she held my leash.”

After leaving her adoptive parents, feeling like danger is lurking, then travelling even further on a bus from Chicago, Callie sees a sign outside a bar with a message declaring if you can find the door you have a job, that the wage and tips are really good. It seems odd. It sounds good. Her life has been unusual thus far and she could do with some work. She could also do with shelter because she is out of seizure meds and something seems to be tracking her. She needs to get inside and, lucky for her, she’s able to enter the bar.

Nectar and Ambrosia is Florian’s bar. He’s the Doorkeeper, a human in a world full of deities, but it’s bit more complicated than just that. His bar is a threshold, a place other beings can enter this realm via. He lives upstairs with his Gran, Bridget, who came across from Ireland a long time ago, and they are very close. Being the Doorkeeper is both a punishment and a lifeline – if he leaves he risks immediately reverting to his actual age, which is quite old, and the wrath of a certain deity who created Florian’s need for sanctuary in the first place. He has to see out his term. A person he loved also extended him refuge at Nectar and Ambrosia and it means a lot to him. He doesn’t mind bar life. He creates numerous things with ambrosia. He enjoys his clientele, for the most part, but occasionally they get a bit rowdy. It’s been a while between a hiring at Nectar and Ambrosia so the sign may seem peculiar but, well, it has good cause to be. Any staff that may turn up are not just workers, they have to have some Amaranthine blood. Only then can they find the doorway the sign out the front of the bar alludes to.

“See, I told you that you wouldn’t be sorry. The sign works.”
“Define ‘works’, please.” Grey Goose and vermouth comprised the ingredients for Hermes’s usual shaken-not-stirred martini.
“The sign’s been in the windowsill for twenty five years.”

Florian tries to ease Callie into the work as he doesn’t want to scare her away but it’s Tuesday night, deity night, and it’s akin to a drunken frat party. Callie has a bit more chutzpah than Florian might think and gives 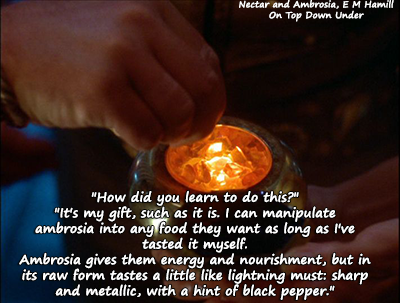 some of the gods a bit of what-for. Wednesday night is sidhe night and while they might seem a quieter lot, they’re an incredibly mischievous group who enjoy some drama.

There are several arcs in this book, Florian’s gran has visions and drops in and out of lucidity regularly. Callie has been diagnosed with seizures and also has visions. Bridget immediately likes Callie and has a vision about Florian and Callie being together ‘until the end’ but she can never read the exact ending of any vision. There is a romance/relationship that develops between Callie and Florian, but it’s an unusual one. It seems that Callie is a Delphian Oracle, a rare and respected medium for deities and the mythological world, and the words ‘virgin priestess’ are tacked onto the job description. It’s not exactly conducive to a relationship so what will happen between Callie and Florian is anyone’s guess.

There’s also the chaos arc. Zeus decides he’s going to out himself on reality TV as a tangible and contemporary god, one that humans can get in touch with via social media. There are numerous deities in the mix too. Some who don’t want any chaos in their stronghold and wish to remain neutral. However, the Christian Heavenly realm is not amused. They believe they’ve given proof-positive of their existence to mortals already.

“Funny, since the Jesus situation provoked the whole contract issue in the first place. He gave them proof in living flesh that He exists.”
“And they killed him. His mortal body, at least,” Gabriel reminded Hermes. “Zeus would do well to remember it.”

As soon as Zeus announces his plan he’s made aware that Heaven sees this as a breach of a deity contract and he’s ordered to cease and desist. When Zeus, or Z as the other deities call him, doesn’t seem to care one iota about Heaven’s edict, a war decree is issued via the angel’s Michael and Gabriel. 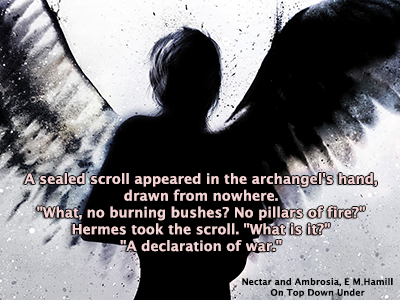 Now Florian’s bar is declared a neutral threshold, a mediation point prior to and during the war itself. As trouble ramps up Callie’s visions are increasingly numerous, and Ambrosia is a medium to aid the visions. Plenty don’t believe she’s an Oracle, Callie struggles with that in the beginning as well, but there are those who believe. She is also syncing with the two other females who are prophesised as ‘three,’ but she is the strongest.

Once Zeus puts a whammy on Greece’s threshold, something the major news channels pick up on but only as some kind of climatic event, Bridget, Callie and Eleni, Hermes’ daughter, clearly see Rome, another large threshold, as the next target and that there will be a deadly cascade effect through smaller portals. It needs to be stopped for them, for humanity. The problem is how? Florian can’t leave the bar, the pantheons have their sides, and of the ‘three’ one is young, one is elderly, and the other is new at this whole Oracle business.

There are some interesting characters in the ensemble of well known names of mythology and lore. I especially enjoyed Hermes. Liked him from the get-go. He takes a strong secondary role throughout. Then there’s the enigmatic but interesting Apollo.

Nectar and Ambrosia is a strong base for what I’m sure is to follow. It’s an interesting spin on ancient mythological beings in contemporary times caught smack dab in the middle of social media and celebrity, giving them that bit more of an ability to create some havoc. There’s also an ennui that permeates the gods’ world that also reflects our contemporary society well. You can see how and why these dynamic beings are getting increasingly antsy.

The reason I rated this book as 4 stars and not 5 is because it’s somewhat slow to get going and to get into the action, and while the action builds, it’s more toward the end. I also had a feeling of – damn, the girl gets ripped off because of work choices again. I think this might be book #1 of a series – or something bigger – so I suspect there is more to the plan than I currently know.

Contemporary Greco-Roman mythological deities meet iconic Christian beings and lore in a unique bar is something a little different for me. It has a dash of humour, a dash of romance, the characters range from kind and likeable to wholly unlikeable with shades of grey in between. There are nefarious actions and we get a small look at Olympus. The best way I can describe Nectar and Ambrosia is intriguing. Quirky. It felt like a good sized, chewy prelude –  tempting me with so much more. I know these characters now, some more than others, the ones I needed to know. I’m waiting for them to return to me in another book soon. Oh, it would be remis of me to not mention that cover. It’s simple yet it captures the essence of the story and adds perfectly to the whole package.

E.M Hamill is such a good writer, I’ve read the fabulous queer sci-fi Dali and now Nectar and Ambrosia. Both are very different stories, and both are enjoyable reading. In the name of Zeus, colour me impressed – 4 Stars!

I love anything that even hints at Greek mythology, especially in a contemporary setting so that would be the first plus for me. This looks like a good start to a series if it is, in fact, going to be a series. I love the archangel photo and that cover is gorgeous.

Greek and Roman mythology are very interesting – so many names and happenings and connections to one another. I agree, a contemporary spin on fairy tales, mythology and lore can make for some good reading.