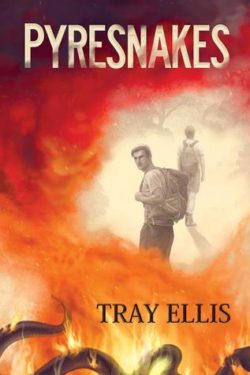 There is another world existing alongside the one most see everyday, and although it is a place of magic and wonder, the dangers are very real.

Aran, an artist, grew up on his grandmother’s tales of the Side-by-Side world. He never expected his knowledge of folklore would aid his boyfriend, Brandon, in an arson investigation, but the snakes that burst into flames when agitated are something he recalls from those childhood stories.

When Aran vanishes, Brandon knows his time as a state trooper won’t help find him, so he enlists the aid of Aran’s grandmother, Ruth, and they venture into the Side-by-Side world.

But Aran has no memory of his life prior to crossing between worlds, and he’s enjoying the company of his handsome new companion, Ren. Even if Brandon and Ruth reach him, convincing him to return to his former home won’t be easy. In a contemporary fairy-tale adventure set among forests and trails, Aran must choose between a mystical fantasy world and the man he loves.

A chance meeting while hiking one day brings artistic Aran together with ex-cop Brandon, who’s now an arson consultant. Through this shared passion of the great outdoors they eventually make a very loving and happy life together. Aran comes with his quirks though, most of them stemming from stories his Grandmother Ruth told him and his siblings while growing up. Aran was the only one that resonated with them though, refusing to camp out overnight or be anywhere near hiking trails at dusk, this doesn’t seem to effect him in cities or urban areas though.

Nonnie Ruth might be just shy of eighty now, but she’s still as sharp as a tack and equally as spry. Back in her day she refused to conform to societies norms and get married off to play house while raising kids. Not too long after turning sixteen like her two elder sisters did, she felt trapped and wanted none of it. She was more than happy to roam around the paths and trails near her home. She went missing soon after her sixteenth birthday for five years and returned a very different person. All her family cared about was that she’d returned safely with her virtue intact and was childless, she was soon married off. By the time Aran and Brandon had moved in together, Brandon respected Aran’s two wishes and even more, his Grandmother Ruth, who’d welcomed him with open arms.

Living in upstate New York makes both of them take the chance to go hiking as much as possible, meaning every weekend before the weather changes. Brandon takes on an arson case as it’s on the way to where they’re heading. What he finds there is the beginning of a bad weekend. With the basement once ablaze again towards the end of his investigation, Aran hears Brandon’s desperate cries for help as he puts out the fire but they’re faced with two of the arsonists as they decide to leave. One is curled up under the front tyre of the car and has begun slowly glowing an orange-red from black within seconds. Brandon still can’t believe what he’s seeing and the heat being generated is from the same kind of snakes he’d found in the basement. As he extinguishes the one under the car, he jumps as Aran uses his extinguisher on the one at Brandon’s feet, which both of them had missed.

Aran’s dark brown eyes go even darker as he realises exactly what they are. He tells Brandon that their pyresnakes from the Side-By-Side world his Grandmother claimed she’d been to for five years as a young adult. She’d witnessed those very snakes used as a funeral pyre, hence their name, pyresnakes. Aran had always believed her but this was the first time he’d ever seen hard proof. A terrible sense of foreboding settles in his stomach once they reach the B&B for the night as he realises that every story his Grandmother told him was true. Aran tells a sleepy Brandon that he sees it as an omen. He also tells him why he refuses to be outside at dusk or camp out, as he feels the pull to the Side-By-Side so strongly at that time. He also confesses that he’d never leave Brandon on purpose, which snaps Brandon out of his sleepy haze. Aran explains what he said again and all the tales that Nonnie Ruth told him.

Brandon is smaller than Aran but a lot more muscular and still can’t believe the way he literally glides up and down along hiking trails. This morning is no different but on the way down, what was meant to be a brief off-track dalliance sends them both to sleep. Aran wakes panicked and as they flee down the mountain side an incident separates them. Brandon can see the sheer panic in Aran’s eyes and tells him to run as it keeps getting darker. Once back at the car Aran is nowhere to be found.

Brandon keeps deciding whether or not to call the ranger to begin a search. The only thing that stops him is Aran’s parting look of terror. That’s when Brandon realises that no ranger party will ever find him and calls Nonnie Ruth, who says ‘you did the right thing, come and get me now before he forgets who we are’. He has a four hour drive to collect Aran’s Grandmother. She is dressed to hike and more than ready to drive the four hours back, Brandon is so exhausted he quietly listens to Ruth’s fantastical story and nods off as she finishes it.

He’s awoken by a nightmare as they arrive in the early hours of dawn as Ruth literally drags Brandon into a new world, one where Aran is beginning to have a great time and can’t remember anything from his old life except for a Grandmother who’d been here once before.

Pyresnakes is a combination of urban fantasy, that then drops into a fantasy world. I had trouble transitioning into the side-by-side world just like one of the main characters did. The writing style, which had been good up until then slowly deteriorated in parts, but would bounce back again. It also lost a few plot points along the way, leaving quite a few unanswered questions. So it was slightly jarring in places which I don’t normally mind unless they’re fleshed out later. I realised it was a novella though, so no, they didn’t get resolved which I found frustrating.

This style of writing is very rarely pulled off. I felt that Pyresnakes also relied too heavily on too many common fantasy tropes, and it just fell short. I didn’t get the urge to stop reading it though and it did hold my interest throughout the entire story. I did get frustrated with it at times and got the feeling that this novella should have been expanded to a novel and it might have possibly played out perfectly. I also took issue with an excerpt in the blurb, if this is folklore then which country is its heritage based on? It’s either not a common one or pure fantasy, I know there is a multitude of unheard of folklore out there but this one’s a mystery to me.

If you like really obtuse fantasy, which does have some very creative ideas then this might be the next book you’re looking for. Its short and sweet with a happy ever after. I don’t know if it’s a series in the making, but if not then a couple of extra chapters with a decent epilogue could have really pushed this book and it’s rating a lot higher for me.

ARC received for an honest review.

Thanks for the terrific review, Paul. It’s hard for fantasy/urban fantasy books to convey what they need to in a shorter word count. With world building and character development, and in this case romance, it makes the story too tight.