Puzzle Me This, Eli Easton 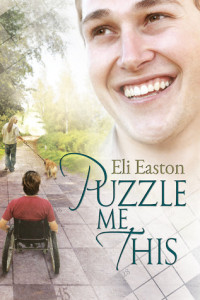 Luke Schumaker is a computer game designer. He works from his home in Pennsylvania after living in California for a few years. He and his dog, Trevor, take the same walk path every day outside his apartment building. One day after a walk, he discovers a newspaper (that he didn’t subscribe to) outside his apartment door. After a few calls he discovers that someone had anonymously bought him a short-term subscription.  Just going with it, he keeps the paper and does the crossword puzzle each day. It doesn’t take long for Luke to discover that there are hidden messages inside each puzzle — messages for Luke.

Alex Shaw creates crossword puzzles for several publications. He has watched his hot neighbor from his window as he walks his dog every day. He instantly crushes on the stranger and wants to meet him but how? The ideas for the crossword puzzles and the anonymous newspaper subscription are born.  Alex is disabled. Paralyzed, he spends his days in a wheelchair.

Luke and Alex eventually meet (in a cute and fun way) and a friendship is born first and not long after, a relationship.  The story is relatively short so a lot of time is not given to each individual character (back stories) but there is enough for the reader to get a feel of each. I fell in love with Alex instantly. All he wants is someone to see beyond his disability and to care for him. I liked Luke in the beginning but his personality (and some of his later actions) left a lot to be desired at times. Actions that make Alex feel that he’s not good enough for Luke.

There are a few secondary characters who add to the story, though they are not in it much (again, the length). Amy is Alex’s sister and while I can understand being concerned about her brother, I was not a fan of her attitude during her first meeting with Luke. My opinion of her did change so that’s a plus. There is a small bit of Luke’s family present but not really enough to get much from them.

Overall, a nice story. I wish it would have been a little bit longer and I wish that Luke had not done a couple of things that he did but boy did he make up for it later. 😀  The way this is done is beautiful.  I totally love the way Alex used crossword puzzles to get Luke’s attention. This was unique.  A nice, quick read.

Previous post
On Top Down Under Book Reviews Celebrates One Year!
Next post
Interview and Giveaway: From The Ashes, Kayla Jameth

The premise certainly sounds a bit different. I also like to see people with disabilities get a story. Nice review, Cindi 🙂

Thanks! It was a fun story and the way the disability was written was done well.