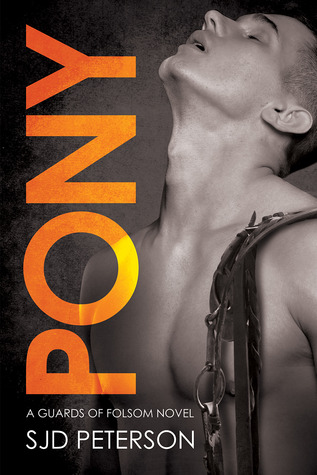 Rating: 4 “Spank My Ass and Call Me Pony” Stars

Grant Maxwell, aka Max, wakes to find his coffeepot has died in the night. Not one who can start his day without his favorite brew, he heads to the local coffee shop. Max finds something even more appealing than caffeine in the form of a twenty-six-year-old hottie Aiden James. For the first time in his life, well-established, confident and respected Dom Max finds himself sputtering and unsure in the face of Aiden’s charms.

Aiden lives with three roommates, works a dead-end job, and isn’t sure where his life is heading, that is, until he meets Max. Max introduces him to a foreign yet intriguing lifestyle, and they soon discover they have something more than mutual attraction in common.

A shared kink is one thing, but Aiden’s past vanilla sexual experiences as well as his fear of losing himself in Max may keep Aiden from experiencing his fantasy. Max has an obstacle of his own to overcome. He must somehow figure out how to help Aiden explore his submissive side when, for the first time in his life, he’s head over heels in love.

Okay, I have to say the title got me grinning and conjuring up my own images of delicately soft leather chaps, bare-assed bodies and riding crops to delight and redden the cheeks. (^^) Neigh and Giddy up! So I was pleased the book gave me something fresh in the kinks that make everything tingle. Although I read this book as a stand-alone I certainly found the references to the previous books.

I loved Aiden. He was a simple dude, not particularly fazed by his lack of direction. It was this need to ‘find himself’ that brought him to the city. He’d been with women and men and not really found anyone who had made him sizzle. I liked that his character was able to acknowledge this fact and admired his courage in making the move to the city from life on the farm knowing his life was his own to change.

Grant ‘Max’ Maxwell is a confident man who knows what he wants and takes measured steps in his life to achieve his goals. That is the way he approaches Aiden too. He came out right away with what he wanted, he was interested and was going to do whatever it took to get a piece of Aiden’s ass. Aiden too acknowledged his respect and admiration of Max’s unapologetic approach. If the urge to touch was there, Max touched.

Max growled and moved closer to Aiden’s ear. “We can stay here and eat if you insist. But I’ll warn you, there is a good chance we’ll end up fucking on this table, so my suggestion is we move to the club where such things are not frowned upon.”

Max, wasn’t he was a bit of yum? I certainly felt his attraction to Aiden. He was the polar opposite to Aiden. While Aiden was a country boy born and raised in Indiana, Max was the uber chic, city dweller with a PhD in Psychology and a penchant for controlling his pleasure. Aiden is honest, real – authentic; he’s had fantasies about being dominated, spanked and restrained, and yet he’s never experimented with that lifestyle – it’s only ever been that – a fantasy. Albeit one that he revisits on many occasion.

I enjoyed their playful romancing; they were clearly drawn to each other from the moment they met. And by God, that first time they got naked. Phew! It was hot, hot, hot! I got that sweet romancing that makes me smile, peppered with sexual innuendo and fantasy material to inspire. Their sex scenes were decadent, gluttonous acts for which the reader gets a front row seat. Max in his gentle coaching gives Aiden the opportunity to become his sub on a 60 day contract.

“I will fuck you anywhere, anytime you ask. However, tonight you are all mine, and I have no plans on sharing you or the delights of your body until I’ve gotten the chance to inspect every last inch of you privately. Now get in the car,”

Did I fail to mention bossy? (Fans self) My own defiant nature was bristling at the acts of submission that Aiden happily took to like a moth to a flame. He seemed born for the lifestyle, but was that all they could be to each other? A contract? Max was true to his promise to teach Aiden what it meant for him to be a sub and Max certainly dominated. It was his (Max’s) acts of consideration and gentleness that wowed me; he was guiding Aiden through this learning process.

Strap on your chaps and giddy up because SJD Peterson knows how to write a deliciously slow build. You will appreciate every single flick of the nip. And let me tell you, it is there, it’s drawn out and in no way would I change it.