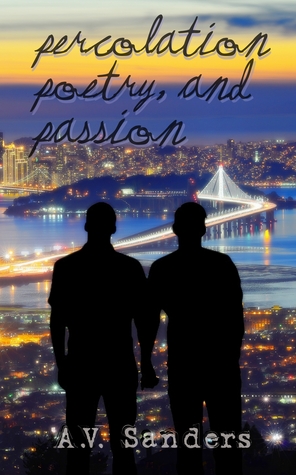 Beckett works at a coffee shop to make ends meet while attending a prestigious university. It’s not the most exciting job, but he’s done it long enough he’s good at it—and can avoid the tedium by spinning sexy little daydreams of things he doubts will ever happen.

Daydreams that soon include Simon, the hot, handsome, and older freelance writer who stops in one day. But then Simon becomes a regular, a bright spot more interesting than the inside of Beckett’s head, and daydreams start to seem like they could be something far more tangible—if reality doesn’t get in the way first.

This is A.V. Sanders first release. It’s a book that caught my attention a few months ago after seeing it pop up on my Twitter feed. I was excited to read this because I love finding new authors.

Percolation, Poetry and Passion is a sweet little story. Beckett is a barista at The Percolation Station. He’s been working there part-time while going to college. While working one day, he meets Simon, an older man who comes in and Beckett is instantly attracted to him. But Simon has a boyfriend, so there’s nothing he can do about it.

Until Simon doesn’t have a boyfriend.

This isn’t a particularly angsty read. But there are a couple of scenes that add a little bit of drama. Mostly because of Simon’s cheating ex, which makes him a little insecure. But I thought it all felt very natural and real.

Simon and Beckett were a great couple! I loved them together. They managed to make me smile and root for them from the beginning.

The ending? Oh, the ending was torture! It left me hanging and wanting more. But it also ended with three words exchanged that I always love having in a book. So I was okay with the ending, but honestly? I would love more! I would love to see more of these two and watch them grow even more in their relationship. It feels like something that needs to happen.

An ARC was provided by the author in exchange for a fair and honest review.

I love discovering new-to-me authors as well. Nice review. This looks like a good story.

Thank you so much for the thoughtful review of my debut story, Tricia! And thank you Kazza and Cindi for your interest and kind words–it means the world to a new author like me! <3 xo, A.V.