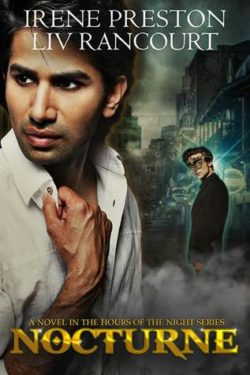 For generations, the White Monks have treated the vampire Thaddeus Dupont as a weapon in their battle against demons. However, when a prominent matron drops dead at a party, Thaddeus and his lover Sarasija are asked to find her killer. Their investigation leads them to an old southern family with connections everywhere: Louisiana politics, big business, the Church, and an organization just as secret as the White Monks.

Meanwhile, an esoteric text containing spells for demon-summoning has disappeared, Thaddeus is losing control of le monstre, and Sara is troubled by disturbing dreams. These nightmares could be a side-effect of dating a vampire, or they could be a remnant of his brush with evil. As the nights wear on, Sara fears they are a manifestation of something darker – a secret that could destroy his relationship with Thaddeus.

BEST TO HAVE READ BOOK #1 BEFORE THIS REVIEW

Nocturne is a continuation of the Hours of the Night series with the same MCs, vampire Thaddeus Dupont and his recently contracted assistant, lover and, well, source of food, Sarsija Mishra. It’s Mardi Gras in New Orleans and Thaddeus wants Sara to get out and have some fun and meet people his own age. Thaddeus may look like a man in his twenties, but he’s one hundred and fifteen. He’s also a demon de-animator on behalf of secret Catholic group the White Monks. At the beginning of book #2 they’ve been invited to Brother Michael’s family home for a rather upmarket Mardi Gras soiree. For a man of little means, Brother Michael and his family certainly live very, very comfortably. Sara also gets to meet twins Josef and Josephine, Brother Michael’s wild-child nephew and niece. They cause a certain possessiveness to bubble up from within Thaddeus – something the vampire thinks of as le monstre – when they play entitled mind games with some comingled sex magic. Jo-Jo and Sef may be Sara’s age but Sara’s more put together than the both of them. Once he’s on their radar though, they tend to pester and to cajole Sara fervently.

After Sara’s had enough of Sef and Jo-Jo at the party, and Thaddeus is definitely out of sorts, the matriarch of the Robichaud family, Aunt Roberta, dies suddenly toward the end of the party. When Thaddeus checks on Berta he senses absolutely no soul. Normally when someone first dies there is an echo or semblance of their life, but not with Berta’s body. Over the period of the official investigation, Berta’s death is ruled as natural causes but Thaddeus knows better. It’s not at all like the last wave of demonic activities that plagued them and New Orleans, but it’s another disconcerting occurrence. Berta’s death is just the beginning of things to come during their rounds of Mardi Gras parties and festivities. As Thaddeus, Sara and Nohea investigate further, there seems to be ongoing strangeness, and that’s saying something given Thaddeus is a demon killing vampire monk working for a clandestine Catholic organisation. What is the connection between people dying and the Robichauds/Vaclours? Brother Michael’s family.

Sara has his own mission after the attack last fall when Marc Goutard, a voodoo/arcane bookstore owner, raised demon souls that had more capabilities than Thaddeus had previously encountered, especially when those close to him were systematically targeted. Sara was possessed and it’s unusual someone comes back from demon possession. Sara believes in the grimoire that Goutard was said to own, Wyers Demonum, and that it is key to what happened then and what’s happening now. He also believes it’s imperative to find Missy, the store manager Sara dealt with previously who Goutard referred to as resourceful, to find out where this grimoire is. How and why it’s connected to all they’ve encountered. How it’s connected to him.

Sara’s facial scar is a daily reminder of his past possession. It itches or burns, and he’s having strange dreams

which often end in sleep walking, and Sara waking up outside. Some dreams he doesn’t remember, some he does. It’s the ones he does remember that scare him the most. He feels he is becoming something that Thaddeus abhors. To add to his worries he is asked by any number of people what he is. He’s always just been Sara, always been human, so the question is strange, frustrating and another concern. Not that Sara is prone to bouts of negativity, but this time fear does close in – he fears that he may be other. Fears that he is losing it. Fears that Thaddeus may have to make a decision that will very much involve Sara in a permanent way.

Nohea, Thaddeus’ kick-arse business manager, has a residual grievance after her sister was killed at the time Sara was previously attacked. Her niece, Angelique, was spirited away in the aftermath by the White Monks and Nohea has no idea where she is. Because Nohea wants her niece back, and she believes that Sara sides with Thaddeus who sides with the White Monks, there is a fracturing of teamwork for a little while in this book.

Thaddeus is still coming to terms with the feelings he has for Sara. He is still dealing with his feelings of being dark and inadequate because he is vampire. He is unhappy that Nohea is hurt, because he cares for those around him. He knows something is going on with Sara but not the exact nature of what isn’t being said. He is also dealing with the vampiric beast within, le monstre. The passion that it invokes in him – both emotionally and physically. How he feels or reacts during the biting and blood exchange, and mostly, during sex with Sara. That he thinks of Sara as his – something he has never encountered before. Thaddeus feels he is too rough sexually. Sara sees it as Thaddeus letting go and enjoying what they share. He definitely enjoys it. However, as much as they communicate, and Sara insists on talking many things through, they are at cross purposes on this aspect. Sara is not afraid of Thad’s inner beast and  Thaddeus feels he should be.

So the main characters have worries and priorities. They also have to work out how to get their teamwork back on track. With all of the craziness surrounding Mardi Gras, and more death, it’s imperative they work as one. However, life has a way of making priorities shift and one priority leak into another.

“Remember when Nohea and I thought their political connections might be a motive? Maybe we were looking at the wrong politics.”

Nocturne builds steadily on Vespers, and once some initial building blocks are in place, the story takes off full pelt. The UF/paranormal story that continues is fantastic. I won’t go into plot intricacies because it’s a spoiler if I do. While you are prompted about Vespers in Nocturne, I would not recommend that anyone starts here. The MCs and primary secondary characters are the same, with a few newer characters introduced or some original bit players with more of a role. There are important ongoing arcs. The romance is also a work in progress which I believe should be read from the beginning. The development of Thaddeus

and Sara’s relationship is a thing of beauty. I just love reading about them. I love them together. I love hearing their thoughts about one another. This pair are intensely connected. Romantic. Caring, Loyal. They click as a couple. Sara can resist the vampire whammy, as he calls it, and he can sense the feelings, or reverb, from Thaddeus. Thaddeus has a growing and deep-seated connection to Sara. But they have a way to go. Thaddeus is still full of Catholic guilt and still a man of his time and origins. He is closeted. Brother George, whom I would like to personally kick up the arse, calls Sara a catamite and delights in his vicious words to Thaddeus. Brother Michael gives off waves of good vibrations, the more intense the situation the more souped up those vibes become. I don’t know, I don’t believe I trust him. He does nothing wrong per se, but…I just don’t know. Brother Patrick is Thaddeus’ confessor, so they all know about Sara and Thaddeus. But, they also know the terms of the contract, and I’m certain at least one of them believes once that is up Sara will be gone. I’m sure they’ll have to work for what they get together. Yeah, I’m sure I’ll also be tortured in the interim by the authors. It’s what happens when I’m extremely invested in the characters.

“You are human,” Thad said. “And fallible.”
“So are you, but you judge yourself more harshly than anyone.”
“I am vampire and damned. The comparison is not valid.”

Nocturne is another strong book in the Hours of the Night series. Plenty of action. Great characters who are being 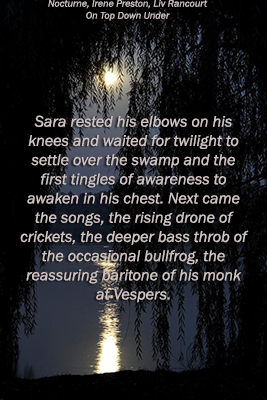 further developed as the series progresses. There is a strong religious theme to this series and it is perfectly woven throughout the paranormal and urban fantasy writing. They do compliment one another nicely when well written, as this series is. While it may not be for everyone, I love the melding of religion and supernatural themes. The MCs and Nohea, who remains a strong, independent woman, are wonderful. When I ask for great characters these are it. They are who I’m looking for. The secondary characters add plenty of depth as well, they don’t have to have much page time either. The romance in this series is strong, beautiful, and works so well within the framework of the overall story. Simply put, Thaddeus and Sara are sublime.

The fact there are several main threads that intertwine makes this series that much more enjoyable. There is magic, there’s a mystery… or three, there are sexy times, there is tension, there’s friendship, caring and a fierceness when it’s most needed. There is more of a darkness to this book than Vespers, not dark as in bleak, just more emotional intensity and layered paranormal facets. I can’t recommend Vespers or Nocturne loudly or strongly enough. 5 Stars!

ARC provided in return for an honest review, but own copy pre-ordered

After reading the author post and excerpt I was eager to read your review. I like Sara and Thaddeus just from what you wrote. I’m loving the visuals and quotes but especially the vampire one and the quote used. I can tell I’d really enjoy this series.

Yeah, it’s a really good series, and I do love Thaddeus and Sara 🙂

Nothing like a vampire GIF and quote. And you have to have a ‘mine’ in a paranormal book.

I do enjoy how we have this series and the Thieves/Hunter series in common. It’s nice to be able to chat about them with you.

I’m very rarely perplexed by characters but Brother Michael has me uncertain. Like you, I think Br Patrick is okay… but you just never know. I can say with all confidence – I’m coming for you Brother George! lol.