Jaden Matthews has never known his father or his father’s family, but he’s about to get a crash course on having siblings. With the recent passing of his grandmother, he’s discovered he has three half-brothers and part ownership of a gym. In Serenity, Florida. His life in New York has hit a rocky road, so maybe this is the vacation he needs to get things back on track.

Chase Michaels lost his future in a car crash almost ten years ago, and he’s made a new one for himself in Serenity. One that doesn’t include getting emotionally involved with people who are just passing through. But Jaden makes his common sense flee and his gut react. He’s got one month with the man who made him believe in taking a chance.

This was a nice love story. 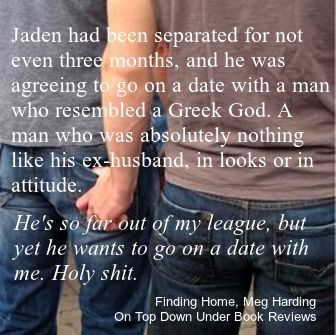 Jaden doesn’t remember his grandmother, his real father’s mother, or his father. He was born in the small Florida town of Serenity but he has no memories of it. His mother wasted very little time in moving her and her son out when he was just a toddler. Apparently Jaden’s real father was a love ’em and leave ’em kind of guy and his mother wanted more for her son than a small town childhood where there wasn’t a whole lot of opportunity. According to her anyway.

It’s a few decades later and Jaden has discovered that the grandmother he never knew has died and left him part of her estate, to be shared equally between him and three half-brothers that he’s also never met – Elliot, Phoenix and Zane. He’s just lost his job so the timing is perfect. He’ll leave New York – and his overbearing mother – and make the long drive to Serenity. Once there, he’ll sell his portion of the estate to the brothers and then come back home so he can focus on finding a new job and getting his life on track.

I despised Jaden’s mother. She wasn’t in the book much but she didn’t have to be.

When Jaden is riding into town with his dog he has car trouble. A nice guy (who just happens to be hot) stops and offers him a ride. Hmm…. Jaden definitely wants a ride. 😉 The hot guy’s name is Chase and it turns out that he’s a close friend of Jaden’s brothers.

Chase has a history. Once upon a time he could’ve gone far in the NFL but one drunken night and one drunken decision completely changed his life in an instant. A football star at Texas A&M, he blew it. He moved to Serenity in hopes of starting a new life without anyone knowing or caring who he used to be, who he could’ve been.

Chase helps Jaden get settled in his grandmother’s home for the night. Before long, Jaden’s forced to meet his brothers. He isn’t overly personable and came across as rude. To me anyway. Things are a little strained with the initial meetings but they loosen up as time goes by. Chase and Jaden start up a friendship of sorts that turns into a sexual relationship. Chase knows that Jaden will be gone in a month but he takes a chance anyway, knowing he’s risking his heart. Jaden has made it clear that he has to go back to New York to get his life together and his time in Serenity is temporary. He just ended a bad relationship where his husband controlled him. This, on top of his overbearing mother who’s a control freak herself. Jaden was forced to move in with her after the split with the ex and he allows her to make all decisions for him – business and personal – including him going to Serenity to have his brothers buy out his portion of his grandmother’s estate.

Did I mention that Jaden is 35? 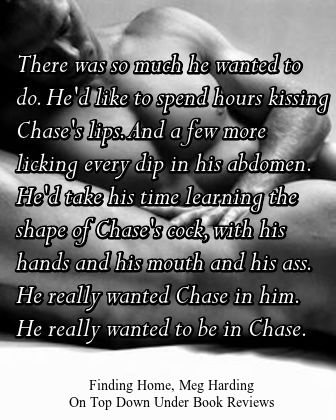 Long story short, Jaden and his brothers grow close, as do Jaden and Chase. Chase is falling in love but refuses to ask Jaden to stay. Jaden wants to stay but knows he has to go back home to settle the divorce and other things in his life. He’s always done things safe. You know the type. No confrontation, allowing others to make major decisions for them, not speaking up when they know they should – the list goes on.

Here’s what I liked about the story –

What I was iffy about –

Overall, this is a nice and sweet love story. I read most of it on a plane to Boston recently, as did the guy sitting next to me. 🙂 Coincidentally, he held onto a small bottle of Purex during the entire 3 hour flight, which I found funny because I was reading the part about Jaden and the hand sanitizer. The story is a slow burn, which I loved. Jaden was able to get to know each of his brothers individually without Chase being around, which I found to be important to the story. I might’ve preferred the ending being just a tad different but only because there was somebody else around at the time and it kind of took away from it for me.

I look forward to reading more by this author.

It sounds like a nice enough book without being too much, certainly nice reading on a plane.

I definitely like the last pic and quote. Very nice 🙂

Thanks, Kazza. The story was nice. I love reading about family and all 3 of the brothers were amazing.

I’ve been wanting to use that last photo in a review for awhile. 🙂