Today we have Kimber Vale joining us for our 3 year blog anniversary celebrations with an author post, excerpt and giveaway. One of the things Kimber doesn’t know is that Hard Act To Follow was one of only a few go-to books for me when I was really ill. I couldn’t read much and what I could read I had to have read before and it had to have made me smile along with the characters. Kyrie and Greg fit the bill. I have read a few of her books – reviews here –  and they are terrific pick-me-ups, so I knew I had to have her join us for our blog anniversary.

Picking Up Where I Left Off

First off, Happy Third Anniversary to On Top Down Under <throws confetti>! I’m honored to be a part of it, so thanks a million to Kazza K. and Cindi for inviting me to the party. 🙂 You girls are the best!

Now, on to the blogging business…

As a writer, revisiting characters from a previous book can be fun and easy (or so I’m assuming). Hey, I already know these people; their voices, their likes and dislikes, their family, friends, and pets—everything. Writing a sequel or prequel should be a cakewalk, right?

Except when I wait a year to do it. Then there’s the whole fact-checking thing. Some of those minute details start to mold in the brain after a while. Hell, I can’t keep my kids’ names straight—how am I supposed to remember which videogame my MCs like best, or which eye their cat is missing? Did I mention both their middle names in the first book? Wasn’t someone afraid of the dentist, or is that just me? Am I wearing my Monday underwear on a fucking Friday?

True, the cool authors use an organized note-keeping system that should make these questions easy to answer. I did face my tech apprehension enough to purchase Scrivener recently (but not enough to figure out how to use it yet—baby steps). I see a future where prequels and sequels and writing in general could be much less chaotic for me (until I inadvertently knock over a six-inch stack of random scribblings piled on my desk, find a note about that zombie idea I had, and wing off in a completely different direction). 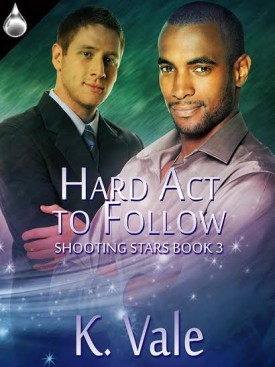 But for now, I’m working on my sequel to Hard Act to Follow—Balancing Act, a novella featuring Greg, Kyrie, and some new faces—and my writing space is utter anarchy. Le sigh. I think I’ll need to re-read Hard Act while I’m editing to make sure I got all my Kyrie and Greg facts straight.

Oh, and here’s a wee unedited excerpt from Balancing Act to prove I’m actually working on it:

“What’s going on with you and Andy?” Greg’s voice was knife-sharp, but broke on Andy’s name. Kyrie jerked his head up to catch Greg’s gaze—intense but hooded by hurt. “Tell me the truth because I can’t stand the stuff I’m imagining anymore.”

“And what’s this?” Greg spun his computer around. A picture of Kyrie and Andy, their heads pressed together, gave the flesh-and-blood Kyrie a blinding double smile. The caption beneath read: Anders Berglund admits to being in love with co-model Kyrie Li. If Kyrie didn’t have a boyfriend, they’d certainly be together.

“What?” Kyrie pulled the laptop closer. “An Andrie fan petition for Kyrie to break it off with his mystery boyfriend has nineteen-thousand signatures. Andrie? What the fuck? I’ve been shipped?”

“As if there wasn’t enough pressure on me to come out. Now they’ve got torch and pitchfork petitions to hunt me down and burn me alive.” Greg ran both hands through his hair, laced his fingers behind his neck, and leaned back against the couch with an exhausted sigh.

Kyrie basically admits they’ve done everything but have sex, a close acquaintance tells us on condition of anonymity.

“This is a bunch of bullshit! You know that, right? That bitch twisted a two-minute interview into this…this…”

“I know. It’s a stupid rag. They think Miley Cyrus is part alien.”

“Isn’t she?” Kyrie tried to sound upbeat, but failed.

“Just tell me now if you’re thinking about him like that. Even a little. I need the truth, Kyr. I can’t…” Greg closed his eyes. “If we don’t work, where does that leave me? What does that make me, besides fucking destroyed?”

An anvil of pressure dropped on Kyrie’s shoulders. Fuck. He’d desperately wanted Greg to come clean to friends and family so they could act like a normal couple in public. Walk holding hands. Kiss once in a while. He ached to wipe away Greg’s caged animal expression whenever they were in a crowd. Kyrie hadn’t realized what his fame would do to Greg’s new resolve to go public with their relationship. He’d never considered them breaking up, but if it ever happened, where did that leave Greg’s sexual status? And the thought of Greg with anyone else—girl, guy, or fucking gorilla—threatened to pull Kyrie under and hold him until he stopped twitching.

Kyrie closed the laptop and shoved it away like spoiled food. Palms pressed to Greg’s fuzzy cheeks, he stared into his dark gaze. “Listen to me. I love you. Only you. Only ever you, Greg.” His eyes burned at the thought of Greg without him. Him without Greg. He couldn’t remember a life like that and he never, ever wanted to know one. “Andy and I are friends.”

Greg smiled, but his expression remained haunted. “We started as friends.”

“Yeah, and we became something else because you turn every crank I’ve got, you sexy beast.” Kyrie gave a wink and a trembling grin. “I wouldn’t leave you for fucking Hercules himself, but Andy? Come on. If we ever decided to go for it, I’m pretty sure we’d both be lying there waiting to get fucked.”

“We don’t like each other that way. And even if there was an attraction, nothing would ever, ever happen. Because I’m all yours. Nothing but yours. Okay?”

“Get it through that thick Cro-Magnon skull, huh? For a smart dude, you’re unbelievably dense sometimes.”

Kyrie chuckled and glanced down. “How ’bout hard? Can it make you hard right about now? Because I think I need some af-firm-ation.” He grabbed Greg’s dick through his pants. “Plus, all this Hercules talk…you know.”

K. Vale is a pseudonym/pen name for Goodreads author Kimber Vale for her M/M genre books.

Kimber Vale is an avid reader, writer and gardener. She worked as an RN once upon a time, but is currently a stay-at-home mom to three busy hobbits. She is fortunate to have an understanding husband who never refuses to help with her “writing research.” He answers questions like, “What do you think eyeballs taste like?” and, “Does the term ‘Cock-Rockets’ sound more like a joke or an explosively good time?” with equal consideration and without batting an eye. 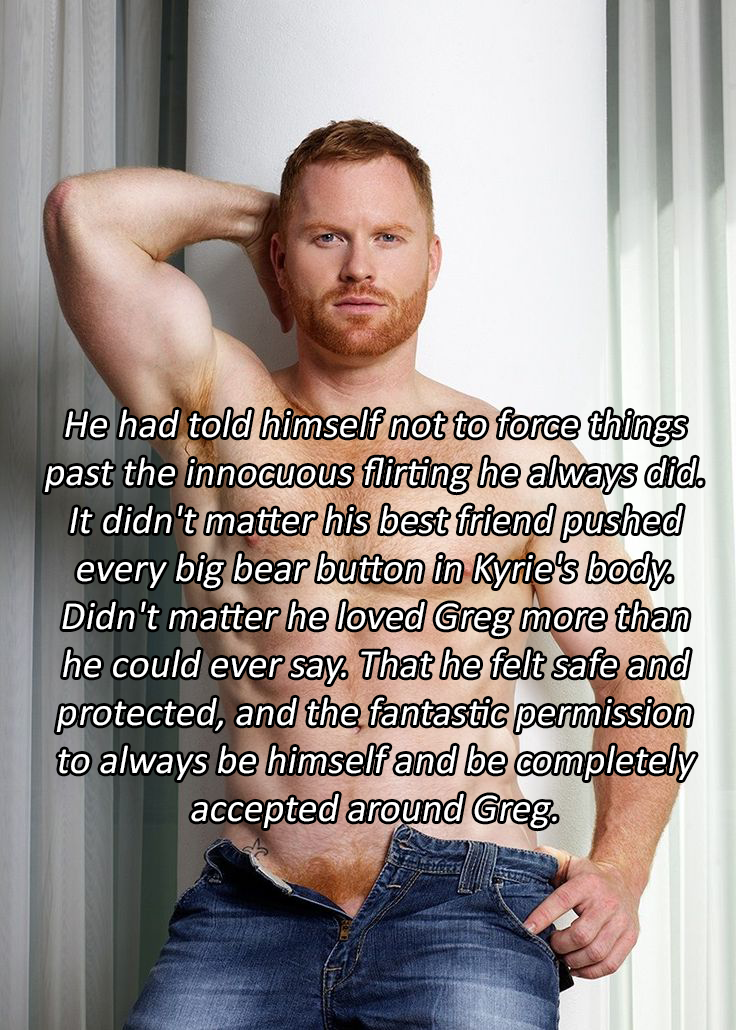 Kimber Vale is giving away an e-book of the terrific Hard Act to Follow. Just leave a comment below by midnight October 23rd USA EST for a chance to win. (If you receive a spam message, don’t worry, we will see it and add it.)

Awww! I’m beyond honored to be your comfort re-read, Kazza! Thank you, thank you for making my day and for having me over. It’s always a pleasure! <3

As someone with ADHD, it took me many years to have what I call organized chaos. I have to keep notebooks close by at all times (even in my purse), but sometimes I forget where I wrote what. While I know what’s what, others trying to figure out my system would be confused. I’ve always said that I’ll write everything down in one place someday, but then I’ll see something shiny and that goes out the window. 😉

Thanks to Kimber Vale for a great post and giveaway and for helping us celebrate our 3rd blog-versary!

There’s a lot to remember if you write one book but if you write more it’s like phew! I loved the post because it makes you think about what planning has to happen to make stuff work. So interesting. 😀

This sounds like a fun read, and the cover is very nice 😉
I used to be more organized but after having my 3 children i became more disorganized , so when something goes wrong because i didn’t write it down or because i simply forgot i blame them LOL

Thanks for sharing an excerpt of Balancing Act, i enjoyed it and thank you for the giveaway chance

I have wanted to read this for awhile. Thank you for the giveaway!

It just so happens that my son and I have been on a cleaning / organization kick this past week while my husband is out of town. I am the world’s biggest procrastinator, so when motivation strikes, I must act on it quickly. 🙂 I keep trying to organize files in my home office so that the men around the house will have a clue of how to take care of paying bills and other fun things if I’m not around. 😀 My other problem is having a mother-in-law that loves to send me things she’s ordered from QVC. I… Read more »