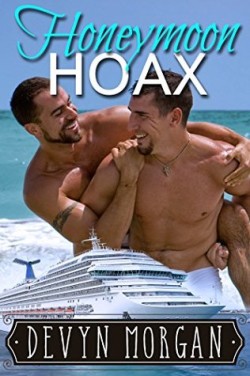 *This review is NSFW.*

What happens when two best friends pretend to be newlyweds on a romantic Caribbean cruise?.

Brad Taylor’s been left at the altar. He’d take the honeymoon alone, but his non-refundable tickets are for a newlyweds-only cruise. Brad needs a spouse to get on that ship, so he asks his best man (and best friend) for a quickie Vegas wedding. Now they both can have the time of their lives in the Caribbean.

Best man Cameron Hines has never been able to say no to Brad’s hare-brained schemes, but this one takes the cake! The truth is, Cameron would be happy to be Brad’s husband – for a lifetime. But pining after a straight man is the road to heartbreak. Better to go play in the sun with his best friend and resign himself to ending the charade once they return to their regularly scheduled lives.

Brad knows he’s not gay, but he’s not entirely straight either. Playing the happy honeymooning couple with another man is the perfect opportunity for some sexual experimentation. It’s just a shipboard fling—it won’t wreck a friendship as strong as theirs. Or will it?

Can the salt sea air and island cruise magic transform this sham marriage into the type of happily-ever-after that comes with knowing that “Today I married my best friend”?

Honeymoon Hoax is a standalone gay romance with a HEA ending.

The first thing you have to do if you read Honeymoon Hoax is suspend belief before you even open the book. It’s far from realistic, but you know what? It doesn’t matter. It’s a wonderfully sweet friends-to-lovers story. Some might say it’s a GFY story but I highly disagree. There were hints throughout Brad’s life that would say it’s OFY and he’s definitely bisexual.

I’d felt an occasional spark of attraction to a guy before, but it was like there was a glass wall in my brain that didn’t allow my thoughts to go any further down that path. Now I was allowing myself to go there and — wow. I pictured myself kissing Cameron again, for real this time, with no trouble whatsoever. 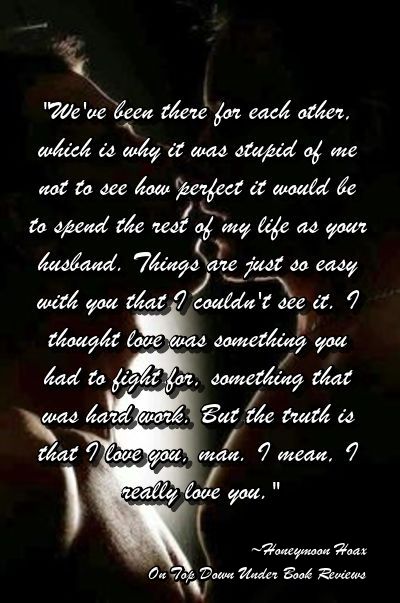 Brad is stood up at the altar. The decorations are in place, the guests are at the chapel, but no bride. The woman he was supposed to marry has the same name as his long-time best friend, Cameron, only she goes by Cammie. When I say the same name, I mean first and last. I did say it was very unrealistic. Anyway, Cammie sends word she’s not showing up so Brad and his buddies (the groomsmen) all commence to get drunk. Not Cameron, though. Cameron doesn’t drink and the reasons for that are explained in the story.

During this drunken get together Brad realizes that he’s more concerned over losing out on the honeymoon cruise – already paid for and nonrefundable – than losing his bride. Sure, he believed he loved Cammie or he’d never have asked her to marry him, but it wasn’t a soul-consuming love. He’d proposed because they got along so well together and they were actually really good friends. Not the smartest reason to get married but it is what it is.

In my heart of hearts, I knew I’d never felt the kind of romantic love you were supposed to feel for your soulmate. I only proposed to Cammie because I didn’t think I’d find another girl who fit in with my life so well. My friendship with Cameron had always seemed more important than romance.

One of Brad’s buddies, Jerome, suggests he take Cameron with him on the honeymoon cruise. Because of a special with the cruise line it’s only for people who are actually, you know, married. Brad has no problem taking his best bud along but they actually have to show proof of a wedding to be able to board the ship. No problem. They’re in Vegas, have a marriage license – with the other Cameron’s name on it – so why not fake it, get married in a cheesy wedding chapel, then go on to have a little fun in the sun? Cameron, who’s openly gay, is hesitant because he’s been hiding a major crush on Brad since they were kids. No way in hell will he be able to hide that if they fake a marriage and honeymoon. He eventually agrees. However, after the cheesy ceremony is over – a Star Wars theme, which I thought was cool – Cameron discovers that Brad just might not be as straight as he’d always been led to believe. What I loved about this particular part of the story is that the author didn’t have the two falling right into bed. Being unrealistic is one thing but Brad still has to come to terms with a few things and drunken sex with Cameron wouldn’t have been good for it to happen the right way.

They arrive in Miami, board the cruise ship, then begin their fake honeymoon. On the ship Brad has a few bonehead moments, but moments that were to be expected all the same. There was no rush, rush into bed but when it happened it was sexy and sweet at the same time. It takes a little time for Brad and Cameron to finally get with the program in regards to their relationship but when it happens it’s such an awwww moment.

There’s a bit of a twist toward the end in regards to Cammie and the others that really had me smiling. The story is short at only 62 pages but the author added an epilogue to show us these guys down the road.

Highly recommended if you like friends-to-lovers stories, OFY, and don’t mind stepping outside of reality for a few minutes. I absolutely loved it and will definitely be reading more by this author.

Nice review, Cindi, and that GIF with quote? Yes. Yes. Yes. Sounds like some easy and sexy reading. Glad you found a good one 🙂

PS: I agree, it’s an Out For You storyline.

Thanks, Kazza. I’d seen a couple of comments on social media calling it GFY when it most definitely was not.

I had fun ‘researching’ for this one (re: the GIF). 😉 This was a very nice story. It’s not for anybody expecting something overly serious but it’s great for someone looking for a quick, sexy read.