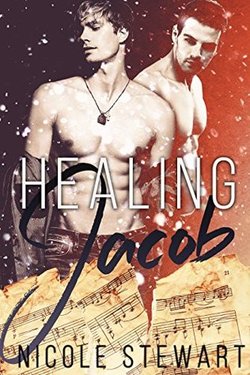 While the main spoilers are kept out of this review, consider it to be spoilerish. There were some things I couldn’t keep out.

I’ve always wanted a fairytale love, and the night we meet is like something lifted out of a fever dream. With no place to go on a dark and stormy night, a luckless wanderer finds shelter with the man of his dreams. Except Lucas Deveraux is no Prince Charming.

He’s a bakery owner with an attitude problem. I’m a homeless guitar player with damage. We’re a bad ending waiting to happen. But his wicked mouth promises to cure everything that hurts me.

And I want to believe in him…

The night Jacob Maddox stumbles into my life, his vulnerability ignites a passion I can’t control. We bump heads, but our throbbing bodies connect. He’s always on the defense. I can’t bridle my tongue. He gets under my skin and into my system, and I can’t get enough.

I’m practical. This isn’t exactly a love story. Jacob comes with baggage, but so do I after being left at the altar by my high school sweetheart.

Oh, did I mention my ex chose right now to make a comeback?

*I (Cindi) fixed a typo in the blurb. It was glaring.

Healing Jacob was a random find on Amazon. I wasn’t asked to review it. I saw it, liked the blurb, and bought it. And I liked the cover. The cover model in the front (on the left) is on a cover of a book my blog partner reviewed last year that stood out for me. When I saw him on this one I one-clicked it. The only problem is that neither character – Jacob or Lucas – looks anything at all like the guys on the cover. Lucas is described with long, chestnut colored hair. Jacob is described with long, black hair. I have a pet peeve about covers. If the cover models don’t match the actual characters it takes away from the story for me.

Jacob is homeless. His only real possession is his old guitar that’s very special to him. A musician, he picks up gigs here and there but he’s by no means making a living at it. During a particular stormy night he’s forced away from his small shelter by a police officer. Looking ahead in the distance he sees lights on in a small business so he rushes to it and inside the unlocked door.

Lucas was left at the altar by his high school sweetheart six months before and he’s still nursing a broken heart and a lot of anger. He owns a bakery and is in the back of the shop when he hears the front door open. It’s the middle of the night so nobody should be anywhere near the place. He’s cursing himself for not locking the door when he sees the dripping wet Jacob. Instead of offering to help the poor guy, he snaps at him. After a couple of very rude moments he finally takes pity on him and offers him a towel.

A few minutes after Jacob arrives the power goes out, causing him to have a panic attack. He has major issues that stem from an abusive childhood that he’s been running from for years. The lights going out brings back a few things that I won’t go into here. Lucas helps him upstairs to a small apartment over the bakery and rushes to calm him and to try to make up for being an ass before. One thing leads to another and that calming turns into a very heated sex scene.

It’s Jacob’s first. With the exception of a few blowjobs here and there, he’s never been involved sexually with anyone. Lucas doesn’t find out that he took his virginity until long after the fact so he wasn’t gentle. No matter. Jacob was really into it and got off on it. It’s what happened shortly after that sex scene that sealed my opinion of Lucas. There was no coming back for me. Not only did he call Jacob the wrong name while he (Lucas) was dozing – the kiss of death for me in a book – but he treated him as if he was a common thief and not some man he’d taken advantage of during an emotional moment. And he did take advantage. Jacob, his feelings hurt by the words hurled at him by Lucas, takes off.

I despised Lucas at this point but I held out hope that he would improve.

Lucas eventually feels a little guilt so he sets out to find him to apologize for being the jerk he was. Jacob didn’t exactly offer up a bunch of personal details when he was forced to do his walk of shame. So, how does Lucas find him? Easy, really. There’s a flyer on the floor of the shop that must’ve been dropped by the wet Jacob. This flyer tells Lucas everything he needs to know in order to find the other man. It was a bit too convenient for me but it worked for the story. He finds Jacob and they immediately fall into bed – or against the wall in an alley for a blowjob anyway – and their odd relationship takes off.

It was guilt over Kae, Lucas’ former fiance, that had him treating Jacob so bad but yet that guilt miraculously disappears when the two hook up again – less than 24 hours later. They do hook up quite a bit. They argue? No problem. They have sex and all is well. Lucas says or does something stupid? Same. Sex without discussion because sex is the know-all, fix-all for everything, right? *sarcasm*  Don’t get me wrong, most of the sex scenes were very hot. I just have a problem with couples using sex to fix every problem between them instead of, you know, discussing them.

Early on I liked and sympathized with Jacob. I got over it as the story played out. For a man who’d been homeless on and off for years he came across as extremely naive and not street smart at all. He wouldn’t last an hour on the streets. Instead of standing up to the bully Lucas – who most definitely was a bully – he gave in every single time. That annoyed me. This also applies to when a character from Jacob’s past appears. If there’s one person who should NOT be forgiven it’s this person. It took Jacob all of 5 minutes and all was well. 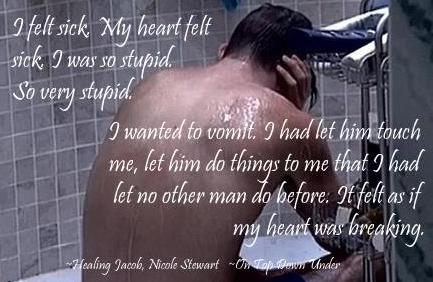 Then we get to the ex, Kae. He was too big of a part of the story and it took away from Lucas and Jacob. There was absolutely no reason for him to be as important as he was in the grand scheme of things. The entire Kae thing – and there was a lot of Kae – annoyed me. In no real world scenario would things play out as they did between Kae, Lucas, and Jacob. It was completely unnecessary. I did not like Kae. I did not like Lucas around Kae or their weird relationship or friendship or whatever the hell it was. I did not like Jacob anywhere near Kae. Kae should’ve shown up, added a page or two of drama, then disappeared.

There were a few things I liked. I loved Tina, Lucas’ sister, though she’s barely in the story. I loved Lucas’ employees, especially Danny. The sex, as I said above, is written very well. There was just too much of it. I know, right? 😀

Overall, I simply did not feel it with this story, which puts me in the minority if other reviews are to go by. It read a lot like a M/F romance novel with the gender changed for one of the main characters. I read a lot of gay romance – my genre of choice – and I guess I just expected better. I’d feel differently about the whole story had Kae stayed away, Lucas not been such an ass, and if Jacob would’ve had a backbone and not constantly apologized for things he shouldn’t have apologized for. Would I read more by this author? I may. I don’t do well with doormat characters and if there ever was one it’s Jacob. I’d not be interested in reading about similar characters.

BUTT BOY??!! Oh, hell no – MEMBER??!! If member is a description for your local politician, yes, as for cock, no. I always mention how much I hate it in reviews for books I read – it is so Mills & Boon old school and prudish, you may as well say his turgid tallywacker. As for the characterisations, this book would not have worked for me; Jacob was a doormat, nothing said about sex with someone being your first time, and after the guy speaks to you like crap, then the same rude MC is a dickhead after? I’d be… Read more »

I laughed out loud when I read ‘butt boy’. I know your lack of love for ‘member’ being used too. It took me back to the old Harlequins I used to read in my early days of romance. I would giggle if I saw turgid tallywacker in a book. 😀 You would’ve hated Lucas right off. Jacob never stood up for himself and was constantly apologizing for things that weren’t his fault. That bugged me. I was actually bugged by a lot more than what I put in my long review. The ex was unnecessary and the way that entire… Read more »

I saw this on GoodReads and almost bought it cuz of the good reviews and it’s cheap. Thanks for the review, Cindy. I’ll be passing on this one.

You’re welcome, Lauren. A lot of people liked the story. It just wasn’t for me. Thanks for your comment. 🙂