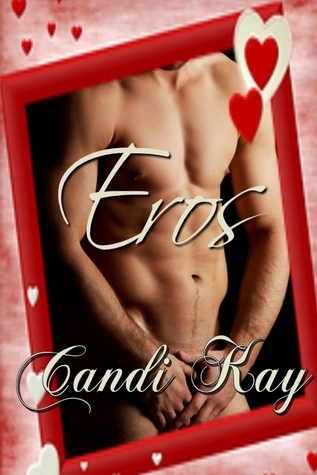 Eros is the god of love and lust. His only job on Earth is to bring couples together and shoot them with his magical arrows. If he occasionally hooks up with the guys first, what of it? He’s all about the lust thing, but love? Not hardly. Not after all the broken relationships he’s witnessed throughout his long, immortal life.

After four assignments that he nearly blows because he’s quicker to shoot his load than his arrows, Aphrodite gives him a final chance to prove himself. If he fails, he could lose his privileged position among the gods and be eternally banished from the planet he calls home. Confident in his skills, he isn’t overly concerned. That is, until he hooks up with the guy he’s supposed to shoot for his do-or-die assignment. In the eons he’s spent on Earth, he’s never felt this way before. Does he risk losing everything he’s ever known? Or does he fulfill his duty and walk away from the only love he’s ever found?

Last year I was thrown into the Christmas spirit with the help of Evan the Virgin Reindeer and his Sexy Buck by Candi Kay, and I also got into the anti Christmas spirit with Devon McCormack’s novella, Cheating Bastard. Here we are approaching another special occasion, of sorts, and Candi Kay offers readers a sweet and sexy Valentine’s Day story in Eros and Devon McCormack, well, he has a tortured novella out. I don’t know what this pair have going on, and who am I to spread rumours? However, it’s like a yin and yang festive thing and I’ve been sucked into this crazed vortex. Anyway…

Eros is the contemporary gay retelling of the Greek mythological pair of Eros and Psyche. It doesn’t matter one iota if you don’t know anything about the Greek gods or goddesses and their stories. The author provides all you need for this sexy, fun, contemporary novella. I liked the way this version was written.

Eros – do not confuse him with Cupid – has assignments, or marks, on Earth where he shoots his arrows into unsuspecting love birds, sometimes there isn’t a love match but the gods have a plan and it’s not his job to question it.

I put my head on the steering wheel and took deep breaths, cursing the fates that brought me out tonight. Why now? I’ve been around for thousands of years. Why fucking now?

But, and there’s often a but, after a bachelor party where he ends up with his legs spread for Sy, the bachelor boy himself, things start to get intense and confusing for Eros, the perennial playboy and love-cynic extraordinaire. He’s been doing his job on Earth but he’s growing increasingly jaded and hitting on more than a few of the marks, loving them and leaving them. His mother, Aphrodite, is not amused that Eros keeps fucking his way through his assignments. If he doesn’t pull himself together and do his job without whipping out his shlong first, she’s going to call him before the Elders.

After the first time Sy and Eros are together, it doesn’t help calm Eros that Sy can see his invisible bow – to Sy it looks like a tattoo, and it’s burning on Eros’ chest. That Sy can see it confuses Eros but he can’t seem to love-him-and-leave-him like he usually does. It doesn’t help that Eros and Sy keep crossing paths, even when Eros is trying his hardest to keep away. The Fates seem to have royally fucked up this time.

Several things happening to Eros are odd, starting with Sy’s bachelor party, which is usually

his gal-pal Aslyn’s type of gig but ends up being about him and Sy instead. It’s odd that the guest of honour wanted him after seeing Eros at the bar he works at. If Eros had seen Sy before he would have remembered him, of that he’s certain. Why is he having burning sensations in his bow on his chest? I mean, he knows why, but it makes no sense. Sy then turns up at a bar Eros happens to be trying to chill at, also at his home, and somehow it’s all linked back to Eros’ phone number, even though he didn’t send any messages. Why? Why is Aphrodite back on Earth dressed like a hooker? Well, it is Aphrodite…

Here is where I end this review because I can’t write too much about this story, and while it does follow the Eros and Psyche theme, I don’t want to give away this version. 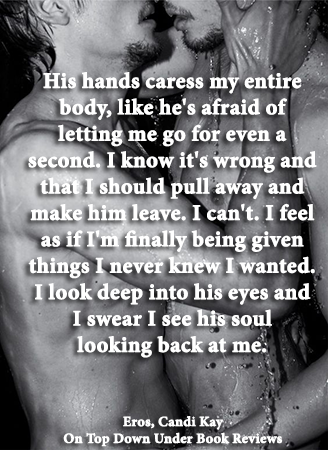 see happy. Sy is wonderful and romantic. Eros is cocky, funny and endearing. He’s a bit of a rebel and I’m amenable to that. If you like a sweet ‘n sexy novella and you love love, then read Eros, I think it will be one of the best Valentine’s day e-books you’ll read this year. It’s easy to read, engaging, and hot, and I do love a retelling of mythology. I wish it had been slightly longer, hence the half star off, but that’s not particularly a bad thing, to want some more if you are enjoying the story so much. Besides, I loved seeing the way this version of the story panned out and Candi Kay did it real justice. If you like Valentine’s Day, I hope you bump into Eros -he’s feeling good right now – and have a nice time. 4.5 Love & Lust Stars!

That GIF and photo are both beautiful. I’m all about a sweet and sappy romance on occasion. 🙂

I do love a sweet romance in amongst the depraved, lol. Eros is sexy with the sweet. Nothing like a sweet ‘n sexy VD romance 🙂

There are no words for how much I love this review. The gif and pic are both beautiful and you pulled some of my favorite quotes from the story (the last one especially).

I’m glad you enjoyed my little retelling of Eros and Psyche’s love story. I had fun changing up the myth a bit.

As for that Devon guy who conveniently keeps releasing books within days of mine, I have no idea what you’re talking about. 😉

You’re very welcome for the review.
There were a few really good quotes and I loved these too 🙂 I had fun reading and I do like this mythology story.