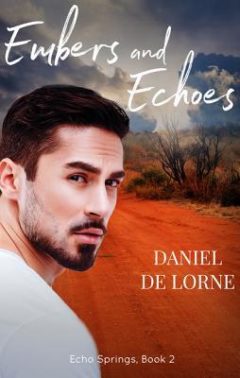 Blue lights in the red dust…

Echo Springs on the edge of the outback – a town where everyone knows your name, and your business. But the wholesome country living and welcoming community aren’t what they used to be. Echo Springs has a dark underbelly, and it is seeping ever outward.

A suspicious fire on the edge of town sets Constable Ben Fields on a collision course with firefighter and one–time friend Toby Grimshaw. When the investigation takes a troubling turn that calls the two professionals’ integrity into question, the heat gets turned up on Ben and Toby’s unresolved history. Ben’s got something to prove, but his love for Toby could cost him – and Echo Springs – everything. Meanwhile, will Toby overcome the horrors of his past and find a new future with Ben – or will it all go up in flames?

I like Daniel de Lorne as a writer. I’ve read two other books/stories of his and discovered how talented he is. I can’t wait for Binding Blood, coming in December. I jumped at the chance to read an ARC of Embers and Echoes for that reason, and because I’ve been enjoying some more Aussie flavour in my reading lately.

At the beginning of Embers and Echoes, there’s a problem with fires around the Western Australian town of Echo Springs. In Australia our flora and unbelievably dry climate lends itself to bushfires – it could be the heat and the dry conditions or it could be arson. Constable Ben Fields is at the cemetery visiting his mother’s grave on the anniversary of her death when a fire comes too close for comfort. Toby “Grim” Grimshaw, a local firefighter, appears out of the smoke and haze looking handsome, but Grim by nickname…. We learn that Ben has a history with the guy and that feelings aren’t just in the past for Ben. With a POV shift we get into Toby’s head as well and he’s the same, still hung up on Ben. The main problem is that these now late twenty something guys grumble around each other, they get angry, and they make assumptions that lead to miscommunication. Once they used to be friends, their families were close. Once they used to be young lovers. That was then and this is now.

‘Look, I’d better get back to it. Go find yourself some witnesses. I’ll collect what evidence I can, and give you a call if I need any help.’
Unlikely. Toby never needed anyone’s help, least of all Ben’s. He’d been clear on that long ago, and the few opportunities since then reaffirmed it.

This wasn’t Ben in his house, this was Constable Benjamin Fields. Still, he was making the tea, and there was something right about that.

There is a lot of emotional stonewalling by both MCs in regards to their personal and now entangled professional lives. They should be working together to investigate the fires that they soon learn have been deliberately lit. However, a decade of distance escalates the current problems they have. Toby and Ben had once been teenage friends and that morphed into more when they were around seventeen. Then, suddenly, after their mum’s died, Toby stopped talking to Ben and Ben didn’t understand why. Ben ended up with another guy and moved to Sydney to further his career in the police force, to get away from the feelings he still harboured for Toby. Toby stayed In Echo Springs and followed in his father’s footsteps to become a firefighter. But Ben has been back in town for a while after things went somewhat awry in Sydney and he feels exposed.

Piece by piece he’d been chipped away until there wasn’t much left that he recognised of himself. Or of the person he’d been with. But that was done now, long past, and he didn’t regret coming back. The career path might not have been the same but Echo Springs was home.

This book is a contemporary romance and mystery/suspense that intersects between the rollercoaster feelings the MCs have for one another – past and present – and who is setting the local fires. Why they’re being lit. The romance was not quite on song. It oddly takes a front-and-centre yet backseat role at the same time. The romance aspect struggled between Ben and Toby because the overriding emotion was anger. I expected some tenderness, hurt/comfort, some intimacy/sex, and there was none. The suspense/mystery side of the book is a primary arc, and there’s the open-ended emotional backstory of Ben and Toby.

‘As much as Toby grates on me, he obviously hits you in all the right places. Have you ever actually tried to have a conversation with him? Or is it all longing looks from across the pub?’

For the most part I liked Toby. Liked that he cared for his dad who has dementia. That he had some reasons to be unsure about his dad and one of the fires but he knows the man his dad is, dementia or not, and he was prepared to fight for that.

‘He’s not the man he used to be. Things change. And what with it being the anniversary—’
Toby stepped in closer. ‘You’re wrong, and if you were a half-decent cop, you’d stop going down this useless line of enquiry and start looking at other options.’

The family was a very genuinely written Aussie country one. I liked that Toby’s aunt Narelle was loyal to her brother and her nephew.

The feel of the book was good, the setting and the way people spoke. The description around the fires, we know them so well in this country. The whole vibe and backdrop of the book fits an Aussie country town perfectly. That people know who’s doing what and to whom is so true of any small town.

I liked Ben initially and then I thought he was a bit of an arsehole with a point to prove about being a good cop. Then he came good again. But in all honesty, these guys should have been working together far earlier, if they had, if there had been intimacy, this book would have received a higher rating. But they ended up working against one another until about the 90% mark. That was frustrating.

Toby had never wanted to talk about their mothers’ deaths when they happened, and then after the funeral he’d shut Ben out of his life. Had Toby ever talked about it? With anyone? Ben had wanted to be there for him, but he’d spurned his sympathy and his love.

The only other things I can mention are a letter, which gets talked about and is revealed at the end, and a feeling of misguided but semi-understandable guilt hanging around Toby. Apart from that, there isn’t much else I can talk about that doesn’t ruin the overall story.

Embers and Echoes is not a bad book. It’s quick and easy to read, it has some emotional moments, some nice writing, but it had the potential to be so much more, especially given Daniel de Lorne can tell a good tale. It missed the mark for being an extra rung above middle of the road. 3.5 Stars!

I can tell I’d probably have the same issue you did with the two main characters. It does, however, seem like a nice story. I love how it’s set in Australia.

Yes, anger overrode any other genuine emotions so that didn’t help because books are a lot about the MCs and my emotional connection to them.

I do love the red dirt and scrub on the cover, it’s so Aussie.