All He Ever Needed, Cate Ashwood 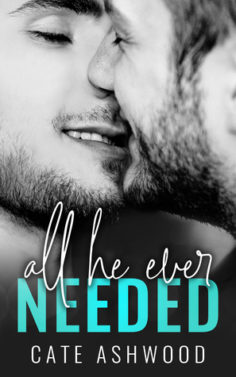 Some secrets are too heavy to hold on to forever.

For Ethan, pretending has become second nature. After all, he’s spent the last decade pretending to be straight, pretending to be happy, and pretending he isn’t desperately in love with his best friend. But in a single moment of raw honesty, all those lies come crashing down around him and he’s left wondering what to do next.

When Jase learns his best friend is going through a breakup, his first instinct is to come to Ethan’s rescue, and he knows just the thing to help. The cabin where they spent summers as kids is sitting vacant, and a week there is the perfect remedy to start healing a broken heart.

In the seclusion of the mountains, long-buried fears and emotions take their friendship into unexplored territory that will either bring them closer together… or tear everything apart.

Already plenty of pre-release reviews about All He Ever Needed. It’s an uncomplicated read for the most part so I’ll just add my thoughts.

Fringe-y GFY. Not quite, but it skirts the edges. The two MCs are virgins at man-on-man sex. Ethan is gay but has been in emotional lockdown over it. Jase, as we discover a bit later, is bi – but neither has previously known this about the other. In fact, both guys have only ever been with women. Jase also admits that’s where his main attraction has been. Ethan was with Alison for four years and while he knew he loved her he also came to realise he wasn’t in love with her. That’s why he just broke things off. It’s his best friend who holds his heart but that’s not something he wants him to know. Jase has tended toward on-again-off-again relationships, particularly with one girl, Michelle, but nothing has ever been concrete relationship-wise for him.

A newly single and sad Ethan is someone Jase has a need to comfort, Jase has always been the protector in 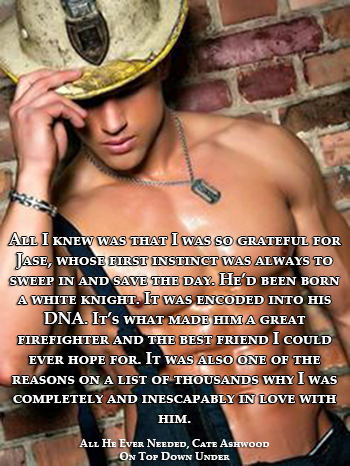 their friendship. He figures he has to take Ethan to his Uncle Kurt’s cabin outside Seattle, it’s a place where the two spent many happy summers while growing up. However, it’s in the here and now that Jase becomes acutely aware he’s interested in his friend in more than a purely platonic way, the comfort he wants to give him, the desire that he feels, is so much more. Ethan, on the other hand, has always loved Jase, knew it but didn’t want to lose his ‘straight’ best friend over his desires and wants. With Jase interested and showing it in this place where it’s just the two of them, with so many memories, Ethan can’t say no. It gets rather hot and steamy, and the cabin becomes one of those sexy fantasies made real.

Being frank, friends-to-lovers and GFY-esque tropes or leanings aren’t always my favourites, and I clearly knew that about the book going in, but I do enjoy hurt/ comfort and a hot fantasy. So that had my attention. But what hooked me most was that I know Cate Ashwood can work emotion, and this book is no exception, it’s emotionally charged. She also knows how to write MCs who are really likeable or, even better, lovable, and there’s comfort to be found in her words, her characters, their actions. I really liked Ethan and Jase. I enjoyed their coming together, I liked the overall lack of drama but that there’s still some meat on the bones – such as, what do you do when you allow yourself to get in touch with the knowledge that you’re gay/bi? That you are in love with your best friend? How do you cope when you are made aware of those feeling while in a bubble? Just enough to connect but not enough to fully process the information in reality. And that’s what it is when they’re at Jase’s uncle’s cabin, a bubble. How do you deal with that when you come back to your job? Your friends? Your real life? Do you gain a partner or lose a friend? This book is a book of two parts, the lead into the comfort, the connection, the sex, beyond friendship. Part two is processing past the cabin, when they’re back in their everyday lives.

All He Ever Needed is an enjoyable story with minimal fuss and a good MC connection. Ethan’s ex of four years, Alison, is an understanding person. Everyone in the book is likeable – except Jase’s fellow firefighters who rubbed me the wrong way with their very intrusive and pushy banter and behaviour. Ethan’s fellow barista was a well meaning but tad awkwardly drawn character with her – ‘so, you’re gay? Cool. I know someone’ dialogue. Honey, no!

The primary issue the MCs have is what to do with what they’ve created and their moments of, ‘what is this exactly’? This new concept is handled pretty well. Sometimes you have to step back and allow the person who hasn’t had much time to think about their sexuality in a new way to process it. To let both people think about what it means, not that there is any particular deep and meaningful in this book, just a glimpse of the bigger picture. You also have to get a plan B 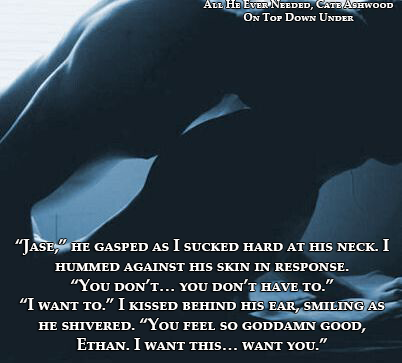 organised in case your desired scenario falls over. Because this is a romance novel, plan A was the winner. Made me happy.

I really enjoyed All He Ever Needed. It’s nicely written with care given in allowing an individual to be who they truly are. It’s also pretty sexy without overkill. There are no great revelations as such, the main one – coming out – is kindly dealt with. There’s a well balanced set of emotions that allow you to attach to the story and the MCs. All around this is comfy contemporary romance reading with a HEA. 4 Stars!

I love friends to lovers stories. Like you, I’m not a fan of GFY-esque books but this one seems to work. I can tell I’d like the characters, even the secondaries. It seems like a really nice story.

I love the visuals and quotes you used. Great review, as always.

At the end of the day, the book sits at one MC kind of being closeted/previously in denial and one unaware MC so I was good, and I really enjoyed the feel of the book overall. Cate Ashwood writes good characters and that’s a big one for me.