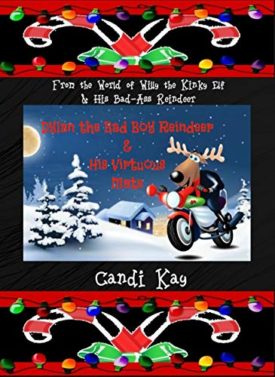 There’s nothing remotely resembling a fairy tale in Mistletoe Hill.

Dylan Davies is a jaded reindeer. He doesn’t pull Santa’s sleigh or even work or live in Santa’s Village, he lives in Mistletoe Hill. Mistletoe Hill is the seedy part of the North Pole, it’s the place people go to hook up with prostitutes, get a fix or get drunk off their tits. Anything goes there. Dylan doesn’t like it but he feels it’s where he belongs and he’s carved out a life there. He’s lived in the Hill since he took off after a fight with his father as a teen and has been there ever since. He’s twenty-five now and owns D’s, a popular bar with shifters near and far, which supplies plenty of booze as well as rooms out the back if you want sex. He won’t allow drugs to be sold on the premises though, that’s out of bounds as far as he’s concerned.

Dylan lived in Santa’s Village for a short while, when he was young and his mum was still around. At the time he was friends with the Simpson and Vickers families, particularly with Barry Simpson and Evan Vickers, both reindeer have their own stories. But Blake Simpson is another reindeer altogether. Dylan felt he was a bully as a young buck and then he hit rock bottom with addictions later on, spending a lot of time off his face in Mistletoe Hill. This cemented Blake as no good in Dylan’s mind. As readers of the series know too well, Blake Simpson did come good. As a reader who couldn’t initially see him ever being redeemed (he was) I understood Dylan’s intense dislike and mistrust of Blake.

When Chief Randy and Willy, his kinky and mischievous elf, come to Mistletoe Hill it starts the ball rolling on a few things. Dylan finding out his mate’s name is definitely one of them – Willy saw them eye lock at the annual Christmas party last year.  The same one Dylan bolted away from straight after. What the hell was that feeling he had when he locked eyes with an unknown reindeer? Of course, nothing escapes Willy’s curiosity.

“The guy you were making goo-goo eyes at before you bolted from the party last year. He tried to catch you but you took off before he could. He hasn’t been the same since.”
“I don’t know who you’re talking about.”
I know exactly who he’s talking about.

The other nagging issue for Willy, and the rest of Santa’s Village, is why Dylan was with the despised Mrs Claus, or the haggy ho as Willy likes to refer to her this time. The truth is that Dylan was coerced into being Mrs. Claus’ toy-boy for the annual Christmas party last year. She told him that she knew what 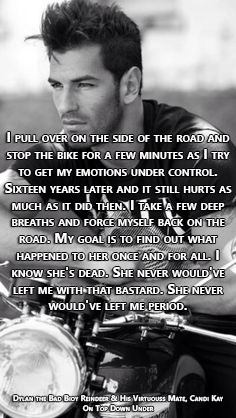 happened to his mother and if Dylan accompanied her to the party she’d help him out. No one trusts her, certainly not Dylan, but when you’re desperate to find out what happened to your mum, you do what you have to. One good thing came out of it – that moment with an unknown reindeer that haunts Dylan’s dreams and thoughts.

Mrs Claus lied, as per usual, and gave him nothing, but Dylan needs to find out what happened to his mother who disappeared when he was nine. He’s never forgotten the pain of not only losing her, but how everything happened. One day she was there then she wasn’t, and suddenly his abusive father was moving them both to different places. Needless to say that Blake plays a fair part in this story because he’s the North Pole’s tech expert, one with a particular skillset of hacking into difficult sites. The other reindeer know that if anyone can find out where Dylan’s father is and what happened to his mother, Blake Simpson can do it. It just takes some trust from Dylan.

Cole Crawford is also affected after the Christmas party nearly a year ago now. He hasn’t been able to get Dylan out of his mind either. Cole works at the jewellery shop in Santa’s Village. He’s sweet and more accepting of the mate bond as he’s seen all the mates around him. When Willy throws them together, best way to describe Willy’s style, Cole is accepting and glad his mate is finally in town. Dylan is somewhat more sceptical but, good luck with that, he can’t avoid the shifter mate bond. He really doesn’t want to either.

All the gang are on deck in Dylan the Bad Boy Reindeer & His Virtuous Mate. Everyone from the other books make appearances, and top of the list are Randy and Willy. Willy is in fine form in this instalment and his stint in the jewellery story is a freaking hoot. It’s the best scene since the infamous Peppermint Whiskey elf workshop incident of a few years ago. He’s on a mission to get Dylan and Cole together and if he has to poke and prod, perv at the hot Dylan at the same time, he’s just the elf to do it. Willy made me laugh so much in this book. Randy was awesome as his supportive but sometimes exasperated partner, and he reminds us that he wouldn’t be anywhere else or have it any other way. I seriously love Willy and Randy.

Dear lord, Mrs Claus outdoes her bitchiness in this book. That woman is a piece or work and where I would normally call shrew on her character, it actually value-adds to have a villainous character like her in this world and series. It works.

Willy is up to his usual crazy, motor-mouth shenanigans – bless him. He can’t help loving three things, outside of his Chief

Reindeer – 1) Peppermint Whiskey 2) another hot reindeer shifter and 3) matchmaking, and he makes sure all three come on out to play. He’s also prone to gossip, the whole Village is, so what’s an elf to do? Get in first, that’s what.

Santa is suspiciously helpful. I did enjoy this Santa.

I think this is my favourite book in the series, apart from the original. I had a great time being with this wonderfully ragtag, supportive, caring shifter/elf (and one human) group of friends/ family that keeps on growing.

The mystery was interesting, although it’s not meant to be a full-on mystery book, it’s first and foremost a Christmas paranormal romance.

Dylan and Cole are good together. They pretty happily slip into their mate bond and Dylan’s backstory adds depth to the overall tale. Dylan and Cole get their happy ending and I’m all for it – make love not war. While they’ll add nicely to the ever developing family I’ve adopted in the North Pole, Willy, with Randy’s help, steals the show and I wouldn’t have it any other way.

The Willy the Kinky Elf series never takes itself too seriously, although there is often a message, just look at the titles, they’re awesome. It’s one goofy, crazy, cheesy, fun and fabulous ride I’ve been on since book #1 came out. I never miss a book and, in my opinion, it isn’t Christmas until Peppermint Whiskey is consumed and a pervy elf named Willy calls it. You’re a butthead Willy. I love you. 4.5 Stars!

Previous post
Kazza: The Meaning of Slow and Why I’m Not Reviewing Your Book.
Next post
Bishop Ridge (Sawyer’s Ferry #2), Cate Ashwood

What an amazing review. I can’t express how much I love that you enjoy these guys. You were the first reader to embrace my kooky Christmas world and I’ll forever be grateful. Thank you so much, Kazza! Willy would send his thanks but it’s a good bet he’s off somewhere getting into more shenanigans or (more likely) Peppermint Whiskey. 😉

Thanks for this zany series that heralds in Christmas for me. You’re welcome for the review, and Willy is a special guy, uh, elf, lol

Definitely worth a read from the sounds of it, but, is there a risk of when I’m next making out, that I may have the the tune “It Feels A Lot Like Christmas” running through my mind? 🙂

Oh my god, that song has a new vibe about it after this comment, lol

The guy on the motorcycle… hello! 😉 And Randy’s quote… awww. It just clicked that that’s a heart in the snow GIF. How pretty. You always find the best ones.

I really needed long hair for Dylan but I couldn’t find the long hair and the bike – except one guy who is naked and that didn’t fit this quote. If it had, bam, he’d have been on here 🙂