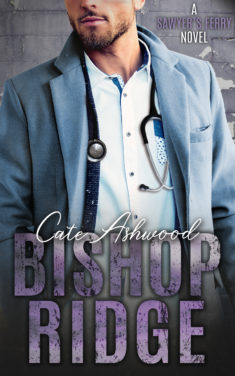 They found exactly what they weren’t looking for.

Logan:
I had almost everything I’d ever wanted—career, friends, my own easy life in Sawyer’s Ferry, Alaska. I’d given up on filling in the missing pieces long ago. Now, I was more than satisfied with the perfectly practiced, perfectly predictable routine I’d created for myself. At least until Jackson Daley walked into my clinic.

Jackson:
Working the rigs is temporary. Everything in my life is. Jobs, cities, and the guys I take home—nothing sticks, and that’s exactly the way I like it. After four years in Alaska, I’m itching to pick up and leave. I’m ready to move on and start over someplace new, until a one-night stand I can’t seem to shake has me breaking all my own rules.
Now as I get closer to walking away, my reasons for leaving seem blurrier than ever, and for the first time in my life, there could be something worth staying for.

This series is shaping up to be one that I’m going to continue to enjoy. Two books in and I’m already awaiting the next one. Bishop Ridge, named after the property that Dr Logan Baker owns on the outskirts of Sawyer’s Ferry, is a really good follow up to the wonderful Alaska. Holden and Gage are still my favourites, love them,  so glad I got some page time with them again, but these MCs, Logan and Jackson, do smoke up the page and are a great second-up couple.

It’s Logan’s turn to run the small SFRH clinic at Belcourt when rig worker Jackson Daley comes in to see about surgery for a bullet that’s been lodged in his shoulder for a few years. Logan tries to be professional but he’s instantly attracted to the confident, handsome, physically rugged and well built Jackson. When they happen to bump into each other later the same day at Belcourt’s grocery store, Jackson suggests Logan comes back to his place for a drink. They both know what that means and they’re both more than happy to have a night with someone else who’s hot and who also understands the rules of engagement. Get in. Have some scorching fun. Bye.

I couldn’t remember the last time I’d wanted someone as badly as I wanted Dr. Logan Baker. The moment he’d walked into the exam room, the second his eyes had raked over my body, his nostrils flaring just slightly, I knew I’d have him pinned under me by the end of the day. And I couldn’t fucking wait.

I didn’t do repeats. Ever. But I was willing to make an exception in this case. I wanted to drag this out a little bit longer. I needed a few more minutes to recover, but I wasn’t done with him. Not by a long shot.

I really enjoy the sense of community in this series. I know I mentioned it in my review of Alaska, but Cate Ashwood does it so well. The locals are coming alive more and more. That Logan is such a part of the Sawyer’s Ferry  community is not missed on the rolling stone that is Jackson.

It seemed like every single person who’d crossed our paths since we’d arrived at the festival had some sort of personal connection to Logan. He was such a huge part of the town, his life interwoven with so many others.

There’s also a touch-base scene with Frankie in NYC. I don’t know how or if he’ll figure into the series because the idea of Frankie living in Sawyers Ferry is pretty hard for this reader to imagine.

Bishop Ridge features two men who are more on the alpha side, particularly Jackson. He works on a rig and he calls 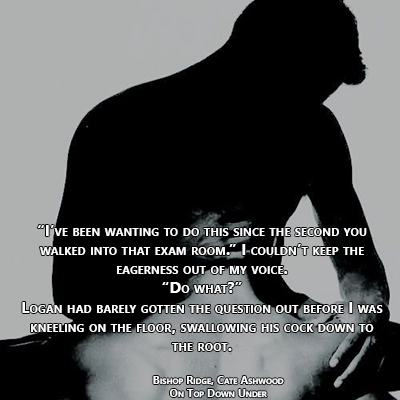 himself a ‘roughneck’ on more than one occasion. He’s definitely tough and independent. Logan is a surgeon who has to make decisions on people’s lives, sometimes those people die on the operating table and he needs to be able to deal confidently with decisions and outcomes. Both guys know what they want in the bedroom, it’s outside that they’re prone to burying their emotions and not allowing labels like ‘love’ and ‘relationship’ to get in the way of their personal independence.

All this makes things spectacularly hot between the MCs, while allowing room for a good balance of the emotions both men are experiencing but attempting to subjugate. If you like a hot ‘n’ sexy contemporary romance, one that also allows you to form an emotional connection, then Bishop Ridge could be your book.

Cate Ashwood has such a laidback style of writing that you think her books will be totally fluffy, and sometimes they are, but she knows how to balance the predominantly upbeat with some nice heartstring plucking. She also knows how to write characters that have you engaged in one fashion or another. I really liked Logan, I just wasn’t fully on the same page with Jackson, although I liked him well enough. You know how you have a friend and they love someone and you’re initially like, I’m happy for you but I don’t quite see the full attraction? I’m worried he may walk or have some moments down the track where he’ll second guess staying, and I don’t want that for Logan. Maybe they’ll be happy or maybe Cate Ashwood has further plans.

My guys Holden and Gage knew Logan was kidding himself that this repeated affair with Jackson was only a fling, and I’m glad Logan got the memo as well. Eventually Logan wouldn’t let it lie when he realised just how much he wanted Jackson to be permanently a part of his life. I’m glad Jackson came around. I mean, the guys went from the 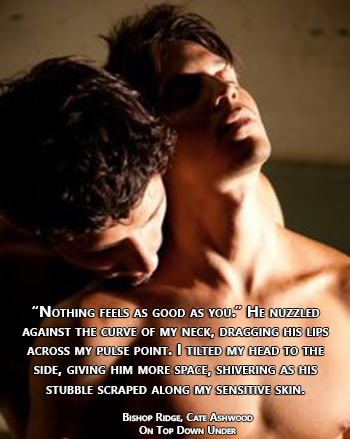 occasional hook-up to texting to seeing each other to staying over as much as they could. Then came the feelings that this was something else – the missing one another, the dread of being permanently apart if Jackson left for the job coming up in Santa Fe. That neither of them were allowing themselves to be honest about their need for this relationship.

While this is the second book in the Sawyer’s Ferry series, it can most definitely be read as a standalone but I highly recommend reading Alaska first because it’s a favourite of mine. I read Bishop Ridge really quickly and that’s so hard for me to do right now. Cate Ashwood makes it effortless to sit down with her characters, her world, and keep on reading. The setting may be cold but it’s completely inviting. I enjoyed spending time with the MCs, I enjoyed seeing Holden and Gage again.

I’ve had a good time being in Sawyer’s Ferry the two times I’ve visited so far and I want back in again soon. Bishop Ridge is a great addition to entice readers to come and stay. I’m looking forward to book #3 with no clue as to who is next, not even caring. I just know I want to revisit Sawyer’s Ferry and enjoy the journey of someone else finding their happy ending in this Alaskan town. 4.5 Stars!

I love a series that continues in the same town and with familiar characters. I remember how much you enjoyed Alaska. This one looks every bit as good. Great review, Kazza.

Alaska is definitely my favourite so far but this was a really good addition. Yes, it’s good to have a familiar theme and town characters you get to know in a series you enjoy.