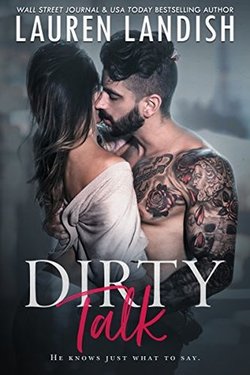 He makes dirty sound so good. So right.

The moment I heard his velvety voice growl that I’m his ‘Kitty Kat’, I knew I was in trouble.

Derrick ‘The Love Whisperer’ King gives out relationship and sex advice on the radio to everyone, but he’s giving me something a bit more personal. Nobody’s ever talked to me the way he does. Daring, Demanding, Sexy… and oh, so Dirty.

Maybe we started this whole thing a little backward, sex first and getting to know each other after. But I’m starting to let my guard down, my untrusting heart beginning to think that maybe fairy tales do come true. Even for me.

I feel beautiful and hopeful when he worships my body. I feel dirty and naughty when he whispers filthy things in my ear.

But is it real? Can something so naughty really be good for me?

And more importantly, against all odds, can it last… forever?

Dirty Talk is a full-length Romance with a happy ever after, no cheating, and no cliffhanger!

I’m going to get a little rant out of the way before I get to my actual review, then I’ll go into what I liked and disliked about this story.

I’m all about supporting authors. It doesn’t matter if they’re published through major publishers, small publishers, or are self-published. I know nothing about the author of this book. I found Dirty Talk when it came up as a recommendation while buying the last two Thrust books. .99 is a steal, but I downloaded it via Kindle Unlimited. I rarely use KU but I keep my account active because it occasionally helps me find new-to-me authors and it helps the authors who are just getting started.

In a lot of the KU books it’s common to see outlandish page counts listed. The authors get paid per page read so I get it. However, what really pisses me off is when an author adds all kinds of bonus content but doesn’t list in the blurb that the actual book being sold stops way before 100% on your Kindle, or 40% in the case of Dirty Talk.

Add it in the blurb or add it in an author note in the beginning of the book – something the author of the book I’m currently reading did. Readers want to know the length of the books they’re reading. Warn them before selling them something that appears to be super long but that actually ends less than halfway through on the Kindle. Listing extra chapters or whatever in the Table of Contents doesn’t cut it. Or it didn’t for me anyway.

Dirty Talk ended exactly where it should’ve ended, 40% or no. I just would’ve liked to have known before I downloaded the book that a majority of what I’d downloaded was miscellaneous stuff that I had no desire to read.

Now to my thoughts on the actual book.

Katrina Snow has been dating a major loser for over a year, Kevin. On the day she gets a promotion at work she discovers that Kevin has been cheating on her. Later that evening she’s listening to The Love Whisperer on the radio and something has her calling into the show and talking to the host, Derrick King, and asking for advice about the cheating ex – on the air. Once the on-air chatting between the two is done, Derrick turns the show over to his co-host for a few minutes so he can talk to Katrina privately. He does something he never does – he gives her his personal cell number so they can talk again if she needs to once she dumps her jerk boyfriend. She waits a week before placing that call.

After that, things start happening quickly between Derrick and Kat. He literally starts talking dirty to her within seconds of being on the phone. Not a bad thing, but a little much for a so-called shy and nerdy girl who’d just dumped her boyfriend of a year. Granted, she’d never really loved the guy, but that’s not the point. Even as quickly as things were progressing, I loved the story. One call led to others and after some pretty intense phone sex sessions they graduated to video chatting, which of course led to some pretty hot face-to-face sexy times.

Katrina didn’t want to feel anything beyond sexual feelings for Derrick. Every single man she’d dated had cheated on her. This, after watching her mother suffer from years of infidelity on her father’s part. She didn’t hate men. She just had bad luck with the ones she picked and she honestly didn’t believe they could be faithful. Derrick, on the other hand, believed in fairy tale love and happily-ever-afters. His own parents had been happily married for over four decades until his mother’s death. He wanted to find the one and believed he’d met her when he met Katrina.

The first actual meeting between the two was Hot!!!! It was everything the calls and sexting had led up to and more. Over time, they worked their way to a true relationship with Katrina finally convinced that maybe there were good men out there and that maybe she’d found one of them.

But alas, there’s always drama when things are going so well for a couple. I mentioned Derrick’s co-host. Her name is Susannah. Susannah went from being a good co-host and friend to being bitchy, even on-air sometimes. There are a couple of reasons as to why that could’ve happened but the main one (according to her) was that Derrick cared more about his ‘pussy of the week’ (that would be Katrina) than the show. Susannah was all about taking The Love Whisperer to syndication but she felt that Derrick was no longer giving his all to it.

Susannah was one of those ticking time bombs that we often see in books. You know she’s going to do something bad but you don’t know what. When Susannah struck? Well, let’s just say it wasn’t quite what I was expecting and it would’ve been a deal breaker for most couples. Of course her ‘striking’ was aimed at hurting Derrick and Katrina’s relationship.

The book has a HEA so you know it all worked out in the end. I really enjoyed the story and the author writes sex scenes and sexy talk very well. The problem I had with that is the fact that there was way too much talking during sex scenes. Talk dirty. Hell, I love that. However, when you’re going on and on and on and using cheesy phrases that had me giggling when I should’ve been getting turned on, I have a problem. Don’t get me wrong. I said the author writes sexy talk very well and I meant it. I just think her editor (s) needed to have reined her in a bit and had her cut the phrases that sounded like I was reading from an old Harlequin-esque type book. Think honey and cream.

There are other characters in the book who are important, with my two faves being Derrick’s father and best friend, a famous football star, Jacob. I adored Jacob and would absolutely love to see him have his own story. Derrick’s father is the parent that everyone would love to have. Ah, and finally, we go back to Susannah, Derrick’s co-host. I despised her the first time she was on-page so the author did a good job making her the ultimate bad guy in the story.

And of course we have Katrina and Derrick. I loved Derrick from the first page until the last one. I loved the way he talked to his listeners during the radio program and I loved the care he gave to Katrina, knowing she was a bit fragile after her history with men. And if the way he treated Kat in bed is anything to go by, holy shit! 😉  If there’s ever a such thing as a perfect boyfriend/lover/significant other, it’s Derrick King. Katrina, I liked well enough, though I couldn’t quite reconcile the shy/nerdy girl who first called the radio program with the sexting/video sex chatting girl that came shortly after.

What didn’t I like? Other than the 40% thing above and couple of minor things I won’t go into, my biggest issue came when Derrick and Katrina said “I love you” the first time. It may be a slight spoiler so my apologies in advance.

The entire story is about Katrina and her fear of love and Derrick trying to convince her that he’s the real deal. I loved the build up and Derrick was so amazing. There was no real build up to the sex other than the sexting but there was for the actual romance/love as far as Kat is concerned. I’m a hopeless romantic and read patiently for that moment when Derrick said “I love you” to Katrina and she finally said it back.

So what did I get?

I growl, leaning forward. “But I love everything about you. That’s why I love you.”

Kat stops, her eyes wide with emotion. We’ve said it to each other before, but it still hit with a lot of feeling every time.

So, dear author, did you not feel it necessary for the readers to SEE when ‘we’ve said it to each other before’ after you built up the story with Kat being gun-shy about love? Did you not believe we would want to be privy to that very important moment? To others reading this review, the quote above is the first time in the book those words are spoken between Katrina and Derrick. It was not a sweet and important moment. It was said immediately after, “You know I love your tits.” Seriously, that’s the line right before he growls and leans forward above. I went back and skimmed through the book to make sure I didn’t miss something, though the main thing I was actually looking for was that special moment between the two. It simply wasn’t there. If, by some crazy miracle, I missed it? Somebody please lead me in the right direction and I will edit my review accordingly.

I know it sounds like I absolutely hated this book but I didn’t. I really did enjoy it. My number one issue with the story is the build up to the ‘I love yous’ and having that taken away from me with it being said somewhere off-page. I felt like it was simply an afterthought and I seriously, as a reader, feel let down by it.

Overall, I really liked the story and I’d be willing to check out more by the author. This could’ve easily been a 5 star read for me. It was exactly the type of story I was looking for. My issues listed above (not the 40% thing) had me knocking off a star and a half.

The cover is absolutely beautiful. A fan of Furious Photog, I wasn’t surprised that they photographed the models. While the author should’ve changed Kat’s description to match the cover model (Kat’s described as having honey blonde hair throughout the book), I wouldn’t change a thing about the stunning cover.