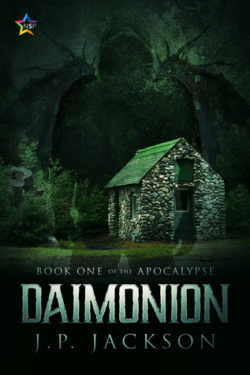 Dati Amon wants to be free from his satyr master and he hates his job—hunting human children who display demon balefire. Every hunt has been successful, except one. A thwarted attempt ended up as a promise to spare the child of a white witch, an indiscretion Dati hopes Master never discovers.

But Master has devilish machinations of his own. He needs human-demon hybrids, the Daimonion, to raise the Dark Lord to the earthly realm. If Master succeeds, he will be immortal and far more powerful.

The child who was spared is now a man, and for the first time in three hundred years, Dati has a reason to escape Master’s chains. To do that, Dati makes some unlikely alliances with an untrained soulless witch, a self-destructive shape shifter, and a deceitful clairvoyant. However, deals with demons rarely go as planned, and the cost is always higher than the original bargain.

Dati is a D’Alae, a type of demon. He’s three hundred years old, having served as a D’Alae for two hundred of those. During this time he’s formed an attachment to humans. His job is to turn mostly human children whose light means they have the potential for being a demon into one – a demon Master would like in his fold. On one occasion he crosses a woman who binds him using spells when he turns up to take her child. Marta knows what’s going on, what Dati is, that he is there for her young son. No matter what, using any skillset available to her, she’s not going to let him take her five year old. Dati eventually agrees to leave him alone, he’s the only D’Alae in the area so his word is good. However, Master will require another potential demon child in her son’s place, which Marta helps with.

Fast forward fifteen years, when Dati turns up at Marta’s new-age store for a rare healing, after a beating by Master, he notices a good looking young man. It turns out to be the now twenty year old boy he spared, Alyx. There is an immediate connection between Alyx and Dati which borders on obsession for both of them. Dati thinks about him when he leaves, Alyx thinks about the muscled man he saw at the store. Alyx has some interesting features of his own – an aura, he can also teleport, called slipping, to a glen, complete with a satyr who seems kind and loving… but he’s so much more.

Master calls his demon minions into a meeting one night, and while it’s centred around a boardroom table it’s anything but a normal meeting, All the people summoned end up forcibly tied to the table. After, they are injected with bugs, silver tic or bot like creatures with spikes that bore into their bodies. It’s painful, bloody and violent. All of the people there are infected by the silver bugs. After some minor recovery Dati is ordered to take the girl next to him home as his new charge. She’s still completely wiped out from the infection and the only things he knows about her are that she looks very young, she doesn’t smell like the other demons, and he’s never seen her before. Nothing further is forthcoming from Master about her but Dati figures if she was summoned to the meeting she has to be something dark and he has no choice but to obey.

Jenae is the girl Dati is tasked to look after by Master, aka Silenus. She is sixteen and she’s as wilful as a sixteen turning seventeen year old can be when they have their moments. She’s a black witch who syphoned powers from an older woman, another black witch, who took an interest in her and is now mysteriously dead. Hey, the dark side had cookies. Yep, Mira was grandmotherly and had cookies for Jenae, and some pretty good spells too. Anyway, Jenae is

one interesting character. Likeable is not the first word that springs to mind about her but she has plenty of attitude and she made me laugh  – yes, I’ll freely admit to being twisted. She drained and killed her sister, her mother and a woman down the hall from Dati’s unit – sucks to live near her. She still sees her dead mother,  sister and the woman down the hall – the zombie bitches as she lovingly calls them. They tend to give her pretty nefarious suggestions, including wiping out her high school bully… and the school itself. She rarely listens to useful advice but she’ll run with a cluster fuck when it’s presented. The girl has untapped dark power and she’s considered soulless, as Silenus describes it. No matter which term, it’s equals a handful. As I read her POV and her behaviour I kept thinking Nancy from The Craft. Then, after the school incident, I thought of Ralph Wiggum and the pyromaniac leprechaun episode of The Simpsons. I had a ball reading Jenae. She also grew a lot in power, as I kind of figured she would.

Hemming is another Demon, a shape-shifter, from the (now infamous) infection meeting who also turns up at Dati’s apartment. He ends up a mess after the silver bugs explode out of him and into three others during an altercation in an alleyway. Dati has his own catastrophic event with his demon bugs as well. All of the people initially targeted by Master’s demonic bugs end up at Dati’s condo, even those who contract secondary infections end up there either post meeting or in a cocoon that forms when someone undergoes transmutation – often turning from human to demon. All I kept thinking was I hope he owns that place because if he rents it he’s never getting his bond back. Seriously, things explode, glass is broken, rooms get rearranged and there is a black magic mould creeping up the walls and along the ceilings, and it stinks of demon and transmutation gunk.

Silenus has something hanging over all his minions – a vial containing a soul, a debt, a child that he wants but the person indentures themselves in return, collection of his own lineage, blood withheld. He also has a plan to summon Lucifer that starts its momentum at the meeting. He has end-of-days schemes in mind but there is a Watcher, a Kasadya, that appears to Dati and his cadre to offer some alternatives to Silenus’ desired evil continuum. A Kasadya is like a prophet and they

speak in riddled ways of the future, and while there is some readily interpreted understanding of what they mean, it isn’t all easily deciphered. The demon and supes that are now at Dati’s don’t want the demonic bugs in them, they hurt and there seems to be something going on that none of them have any control over. One of the most complicated situations facing them all is that demons don’t readily trust one another. If they are going to trust the Kasadya, potentially ridding themselves of the bugs, then that’s what they’ll have to do. However, Silenus may not be the only manipulative evil planner in town.

In this world there are demons, vampyres, shifters – wolf, bear, horse – witches, succubi, incubi, satyrs, elementalists, a Soul Door and a Host, Kasadyas, Shishi Dogs, plus myriad other creatures. It is gory, psychological at times, and it is fast paced throughout. I’m not going to lie, Daimonion gets somewhat nasty. There are some violent scenes and some are downright unpleasant. Know your limits and be prepared going in because it earns its horror tag.

Because I understand some readers need to know, there is no sex in this book. There is a mixed-up romance between Dati and Alyx but this is not a MM romance. It is paranormal and horror first and foremost with a romantic arc in the background.

The author should have made it clear that there was a leap between the first chapter and the next. Fifteen years had actually passed between them. This is where a prologue helps.

I don’t mind multiple POV although they must always progress the story. My biggest problem lay in the fact that different POV didn’t always equal seamless plot progression or the ability to get close enough to Dati and Alyx. I found myself closest to Jenae, which is no problem except I needed more connection with and about the D’Alae, Dati, and the intriguingly and unusually hybrid, Alyx.

This is one interesting story. There is action aplenty and a world of diverse supernatural beings who are flawed but intriguing. While the characters haven’t quite been able to grab me fully, and I can’t say I love any character in particular, the para/fantasy story pulled me in and I’m really fascinated to see what they do and where they 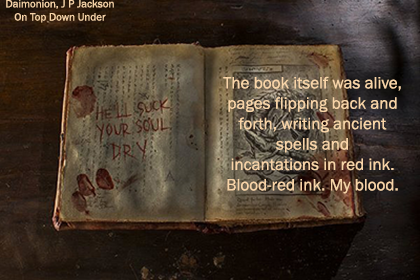 take me next. It is so hard to find quality paranormal/ fantasy reading of the queer variety, especially ones that are fascinating and whisper dark promises of things to come like Daimonion does, so I am grateful when authors come out with books like this.

J P Jackson shows a ton of promise in his first book and I really liked the world he has weaved in Daimonion. I’d love to see him settle down into a comfortable groove and take his time with character and overall relationship development – no matter what kind of relationship. It’s vitally important to make readers not only want to connect with the world, but want to keep connecting with the characters at the heart of the story. I think the author will produce even better storytelling once that happens. Fun, action packed, deliciously dark, Daimonion is wholly entertaining reading from beginning to end. 4 Stars!

This sound like its right up my ally, great review and rec Kazza. Thanks

Definitely a “Paul” book 🙂 and you’re welcome for the rec. I hope you enjoy it.

I could’ve sworn I’d commented on this already.

This looks like a really good book. I love a good paranormal/horror book. I can totally see me loving Janae but all the characters look interesting. Great visuals and quotes.

I love the cover. It has just the right amount of creepy.

There has been a bit of a behind the scenes weird blog thing going on with this review – it’s been somewhat haunted – so you may well have commented, Cindi. That would just add to it all.