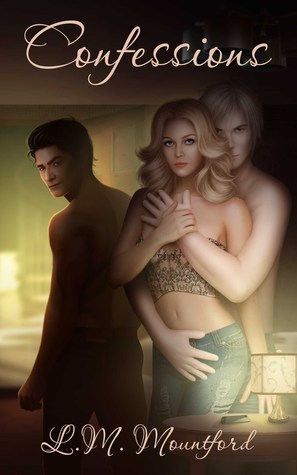 **CONSIDER THIS A MAJOR SPOILER REVIEW.**

What is the measure of love? How far would you go to save the one you want but know you can never truly have?

Mina Carring is a woman that has given up on love. A rising star in the bright lights of Hollywood, men come and go from her life, passing like ships in the night, yet there is only one for her, the one she’d let slip away. However, when Mark, her stepbrother, is filmed in a compromising position that could lead to a scandal which would ruin his life, Mina must step in. Now, powerless to escape this dark path of lust and desire, torn between the dark delights of a handsome rogue and the one person who has always been there for her, she must confront the truth she has long tried to bury…

I held onto this review for a few days. I kept thinking if I walked away and came back later that maybe I’d see things differently. I didn’t. I’m going to start my review with this – the blurb needs to have a trigger warning. A majority of the story involves a very long forced sex scene. While the author turned it around (in a sense) where the woman enjoyed the sex, it should be stated very clearly that it was a gang rape. There’s no other way to describe it. Also, I will say that the fact that she “enjoyed” her sexual assault did not win any points for me as I continued reading.

Deep down she knew she should not be enjoying this, that it was wrong, that he was as good as raping her, but her body was betraying her and she could feel herself growing wet with desire.

Mina is a famous actress slash model. At twenty-four, she’s had the same boyfriend for the past three years and seems to be doing well both professionally and personally. The boyfriend, Jason, seems like a really good guy. He’s head over heels in love with Mina and he makes this known often. She, however, hasn’t – in three years – been able to say she loves him back.

That was my first clue with Mina that had me not liking her almost immediately. Three years with a guy you don’t love, why not just leave instead of stringing him along? Because of sex? She could find good sex from others.

With brings me to my second thing with Mina. She doesn’t hesitate to crawl into bed with anyone and everyone after leaving her boyfriend at home to wait and likely believing that she’s being faithful while she’s gone.

Mina has had a bad day. From a jerk director who treated her poorly, to everything else you can imagine, all she wants to do is shower off the filth of the day and enjoy her evening. It’s her younger stepbrother’s twenty-first birthday and she promised she’d stop by a party he’s having to celebrate. Because of the above-mentioned jerk director, she’s running very late. She teases Jason – the boyfriend – into thinking they’ll be having sex before she takes off for the party but leaves him hanging – literally.

When Mina arrives at her father’s house – where the birthday party is being held – it takes her quite awhile to find Mark, her stepbrother. She walks into what looks like one, big drunken frat party. Mark is nowhere to be found. She passes a few creepy guys outside the house but chooses to ignore them. Once inside, she’s reintroduced to Mark’s best friend who she had babysat many years before when he was a rambunctious little boy. Daniel – aka Danny – is definitely not a little boy now. Daniel and the creepy guys from outside (who followed her in) tell her that Mark had had a ‘beer incident’ and is upstairs. She rushes by them to find him. Outside his bedroom door she hears the sounds of Mark masturbating. Instead of doing the right thing and leaving she opens the door and watches as he jerks off to a photo of Mina. When he’s done she makes a sound that has him opening his eyes in shock and embarrassment.

Instead of leaving, Mina closes the door and locks it and commences to pleasure her stepbrother. It doesn’t take long before her jeans are around her ankles and he’s pleasuring her at the same time. This leads to her stripping off her jeans completely and climbing over Mark and taking him inside her. The sex between them goes on for a very long time before they are both spent. As soon as it’s over they realize they aren’t alone. Not only are they not alone in the bedroom but they have a good-sized audience who have plans of their own for Mina. Each guy has videotaped the sex between Mina and Mark on their phone and they don’t hesitate to blackmail the step-siblings if Mina doesn’t go along with whatever they want over the next few minutes.

This is where I went from somewhat enjoying the story to shaking my head. Mina is forced to do things to several guys – one of which is Mark’s so-called best friend – otherwise the videos of Mark and Mina having sex will be plastered all over social media. This could hurt Mina’s acting and modeling career and possibly ruin things for Mark because it was his stepsister who he was videotaped having sex with.

Personally, I didn’t see the big deal one way or another with the exception of Jason, the boyfriend, who was only on maybe one page of the entire book. Mina and Mark weren’t blood related. Some of my favorite books are about step-siblings or step-parents and step-kids hooking up. I know some see it as taboo but personally I just see it as another sub-genre I enjoy reading.

No doubt they’d been hoping she would scream and shout and make a scene that would have brought the entire party crashing in, humiliating Mark on his birthday.

I didn’t hate this but I didn’t love it either. Mina is not a likable character and I had a very difficult time with her. I liked Mark well enough I suppose but there were sections where he came across – like Mina – as a bit too TSTL. The only character I truly liked in this story was Jason and he was barely in the story at all. I also felt that it was unfinished. The ending was there but I’m not sure how I feel about it.

Okay, the pull quote at the side alone has me saying, “Fuck no!!” and I like and read dark, taboo stories, but they have to walk that dark line really well. I also agree there seems to be a feel of masturbation? Bad. Gang rape? Perfectly fine – pfft. This book appears to have made the mistake of making the MC out to be a cheating, callous bitch so that anything that happens to her is going to be okay and deserved. That is NOT how it works well when you are writing this kind of book. It gives off… Read more »