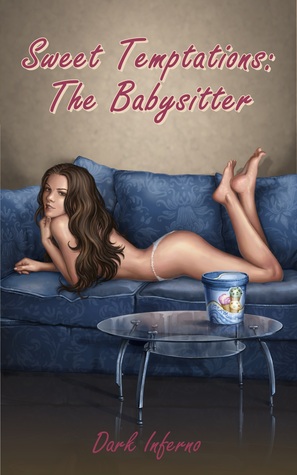 Richard Martin had spent his life trying to be a good man, ever noble and honest. He loved his wife, with a passion, and had never strayed from his vows. However, the bonds of marriage and family are such savoury things for a man with a sweet tooth and for the first time, his eyes are straying towards their babysitter. Young and beautiful, Rebecca was a vision of temptation, and never was anything so sweet as the forbidden fruits of temptation…

This is the first volume in Dark Inferno’s sizzling new series Sweet Temptations.

It’s not often that I stray from my norm and jump into M/F erotica. My reviews on this site prove this. But seriously, check out that cover! Then read the blurb and say you aren’t a wee bit tempted to check it out. I know some who are anti-cheating in their stories will be all over me for this one but that’s okay. I enjoyed the hell out of this short. I was left eager to see where the author will be going next in the series.

Like the blurb states, Richard has never cheated on his wife, Alice. He loves her dearly and would never do anything to upset their marriage. Sure, he’s been tempted but he would never in a million years intentionally hurt her. But then there’s Rebecca, the babysitter. Gorgeous. Sexy. Major fantasy material. Alice and Richard haven’t had sex in over a month. He’s horny and he’s frustrated. When Richard has to rush out the door (after getting good and hot and bothered with his wife first) to go to Rebecca’s apartment to work on her computer, what happens with he discovers that apparently he’s not the only one with fantasies?

He should go now, this was his chance, before things grew even more complicated, all he had to do was go and everything would be fine…

“Come on, come on… don’t stop now. Ohhh God, I’m so hot. Please fuck me Mr. Martin! I need you to fuck me….” How could he resist?
There is not a lot I can say about this short story without giving too much away. I will say that it’s one hell of a hot story. I am eagerly awaiting the second in the series and I look forward to reading more by this author.
.

Dark Inferno stopped by for an interview with On Top Down Under. You can the find the interview here.

This book was reviewed for On Top Down Under Book Reviews at the request of the author.

That cover IS hot and I don’t think the cheating thing stands in erotica – although I read it in romance too. I kind of expect it because it adds to the whole kink/taboo thing.

Nice review, and that GIF is all kinds of yummy.

Thanks! I love that GIF too.

I think there’s more to the ‘cheating’ thing but I can’t say more without giving something away. I’m eager to see where the author is going with the series. This is a really good short.