After The Fog Clears, Lee Thompson 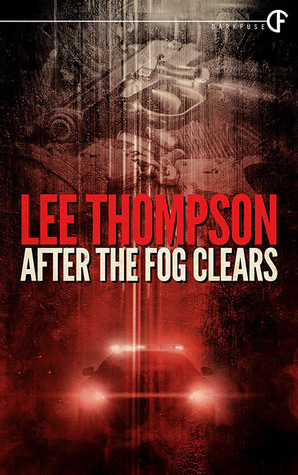 When a policeman accidentally runs over a young boy on a fog-shrouded street in Saginaw, Michigan, it thrusts three families into a head-on collision with grief, violence and chaos…

Officer Nathan Hazzard: for years now a dirty cop and on the brink of losing touch with reality, willingly releases himself from society’s shackles…

Luther Anderson: a young man whose only true concerns up to the day of the accident is to care for his crippled brother and their grandmother, becomes the target of intense hatred…

Raul Spencer: a disgruntled son working at his father’s funeral home; an adulterer, who fears his sins will find him out, blames everyone else for his problems even as his selfishness leads him ever more astray…

Geneva Spencer: the wounded mother who holds her dying son in her arms and finds that there is no one there to hold her as the life she knew takes a dark turn once Officer Hazzard starts pursuing her for reasons she can’t begin to understand…

In the fast-paced Suspense novel, After the Fog Clears, author Lee Thompson probes the fractured psyches of the lost, the abandoned, and the psychotic.

After The Fog Clears is several stories in one. At the center of them all is a horrific accident that takes the life of a young boy. 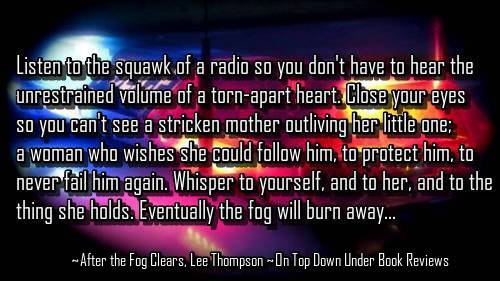 It all starts with a police chase. The cop doing the chasing is a bad cop who feels that rules don’t apply to him. Officer Nathan Hazzard has always done things his way, his superiors and others be damned. On a very foggy morning he chases a speeding car through a residential neighborhood. A moment of carelessness ends up costing a life. One second he’s driving too fast in the fog and the next he’s watching a mother holding her broken child.

This sets the stage for all the other characters and their stories.

The grieving mother, Geneva, has problems that go far beyond the loss of her child. While mourning the horrible accident, she’s also being forced to face reality in regards to her marriage and her family. A good woman, she’s also dealing with the guilt of knowing that she was responsible for her son when he snuck out of the house.

Then there’s Raul, Geneva’s husband. Raul has been groomed from birth to work for his father at a funeral home. He’s done everything he’s supposed to do, but as it is with some parents, it’s simply not enough. An eighteen-year-old employee, Luther, has more pull with Raul’s father than the man’s own son. On top of work issues and losing his son, Raul has secrets that could pull him even further from his wife and family. To say that Raul is emotionally unattached would be an understatement. When his wife needs him the most he’s just…. vacant. He doesn’t hold her, console her, or do much of anything except share her space and even that’s limited. Oh, he’s extremely attached to another woman who is almost always nearby – the woman he’s having an affair with behind his wife’s back – someone Geneva is very close to. I despised Raul for a variety of reasons. That lack of love got stronger as the story continued.

Luther lives with his grandmother and older brother by two years, Herman. Herman was my favorite character in the book. In a wheelchair, he has to depend on Luther and his elderly grandmother merely to get by. Neither minds because the love in that family shines brightly each time they’re all on-page. It was Luther who was being pursued in the fog when Officer Hazzard hit young Dominic. There are secrets with Luther’s family as well. His and Herman’s parents are in prison but neither brother knows why. The grandmother refuses to even discuss her son and her daughter-in-law, regardless of how much she’s pushed by her grandsons.

There are secondary characters who play a huge part in what happens in the 48 hours after Dom is killed. There’s Geneva’s brother Isaac, who showed up for a visit only to discover that the nephew he came to visit had died that day. Isaac, I liked, though I don’t think I was supposed to. He’s take-charge and doesn’t allow anyone to get in his way, and that includes Raul in Raul’s own home. Of all the other characters in the book Isaac was the only one who really stood up and took charge. I respected that.

Then we get to Regina, Geneva’s closest friend in the world. I can’t really say much about Regina or I’ll give a lot of the story away. I will say that I didn’t like her even a little. She came across as a good friend for Geneva but she was anything but. 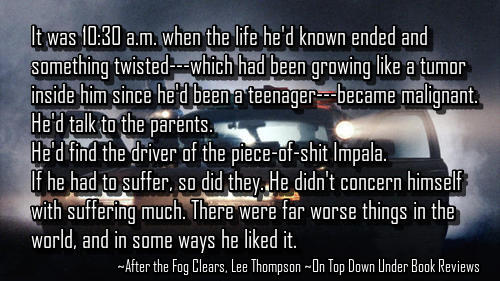 Over the course of two days everything unravels for all these characters. Every single thing in this book, and every character, is connected somehow. It all starts with a bad cop who was chasing a teenager down a residential street in heavy fog and it ends with a finale I admit I didn’t see coming. The bad cop blames Luther for everything. He’s suspended from the force pending a psychiatric evaluation. After an incident with his young wife shortly after, Officer Hazzard begins to lose all sense of reality. He’s so convinced that every bad thing that has happened in his life is because of others, not his own actions. He feels zero guilt over the death of the little boy and he takes no responsibility for it.

Raul is also unraveling, but not for the reason one would think – the death of his child. He quickly goes from being the so-called good and responsible husband to losing it and it’s all over a woman. It’s just not the one he’s married to.

Luther is only trying to do what’s right for his grandmother and disabled brother. A person from his past shows up and it takes a long time for the reader to discover if this person is good or bad. Completely unaware of the bad cop’s plans and actions, he goes about his business with his family. In the background, however, Officer Hazzard has set his sights on Luther and won’t stop until the teenager is out of the picture completely.

Officer Hazzard also latches on to another character but saying who would be too telling.

There is so much that happens in this story from the very first page. It’s fast-paced enough where there’s no real lull or wasted words. However, there are just so many different stories going on at one time. While I had no problem keeping up, I still felt that it was a little too busy, especially at the end. I got to 94% of the book with still a lot of unanswered questions. Granted, the author ended up answering them all in the final pages but I felt that it was too much too fast. It also takes a very violent turn, and while I’m perfectly fine with violence in books, I felt – again – that it was too much too fast. 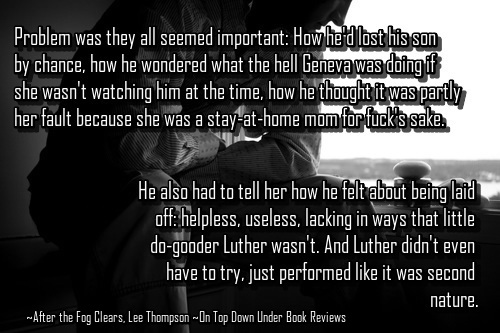 Another thing that really bugged me – and this is me speaking as a parent, not a reviewer – is the total lack of mourning over the death of the little boy. Don’t get me wrong, the mother was in pain and had a small meltdown at first. However, I didn’t see the tears, the breaking down, that I expected from, well, everybody. Raul was more concerned about losing the woman he was sleeping with behind his wife’s back. Geneva, later, was too busy dealing with the b.s. that was her husband and his issues. The grandparents were upset but there was just so little mourning with them or anyone else. Where was the outrage over the senseless accident? And to add to that, there’s a specific scene in the book where Geneva is face-to-face with the man who killed her son. It was literally the day after the death of Dom, yet she didn’t react in any way how I believe an outraged and grieving mother would act. Sure, I know that all people mourn differently but this was literally a nonevent for the woman. Not so much for others who were in the room at the time, but for Geneva.

I think what I enjoyed the most was reading about Luther’s family. I felt that his and Herman’s grandmother should’ve been more forthcoming about certain things, but I also believed her lack of sharing was done strictly out of love for her grandchildren. There are no words for how I felt when the truth behind Herman’s disability came out. That was one of the questions I’d been worried about not being answered. It was and I was almost sickened over it all. But it did explain why Luther’s grandmother kept things close to the vest.

Overall, an interesting read. I’ve seen the author’s name all over the place but I’d never picked up one of his books to read before now. I enjoyed it, even if I was somewhat bothered by part of the resolution at the end. No, more than bothered. One thing was pretty heartbreaking. It started with a horrific act with the death of young Dom and it ended with more death and violence. That’s all I’ll say about that.

Wow, this certainly sounds like an interesting book. I have to admit the lack of time for grief over the loss of a child is more than disconcerting to me, because I know how I would be, but I’d probably still read this book for the other psychological aspects of the story.

Great review, Cindi. I love the quotes in the pics/GIF. The whole review caught my attention and I might just grab a copy of this one.

Thanks, Kazza. It is a very interesting book and I believe you’d really enjoy it. I get that everything had to move so fast because it took place over a period of two days. However, it was just a bit too rushed toward the end.

With the focus being so much on other things, I just feel that more time should’ve been devoted to the mourning. Of course, as I say in the review, that’s me speaking as an actual mother and not a reviewer when I say that.

I’ll definitely be seeking out more books by this author.