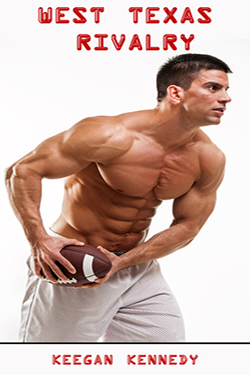 Cruising into his senior year of high school, Rob Baxter has got it all planned out, or at least he thinks that he has. Despite his killer body, his popularity, and his thinking that he’s the obvious choice for the starting quarterback of his football team, Rob is thrown an incomplete pass when Anders Kirkpatrick moves to Mineral Flats, Texas from California. Immediately, Rob detests Anders and begins to consider him a rival for everything from his girlfriend to his position of starting quarterback. Finally, when he confronts the blond California football jock, Rob is in for the surprise of his life.

Rob Baxter has been looking forward to his senior year since his freshman year of high. He’s pretty certain this will be his golden year and all that he wishes for will be coming his way. Everything seems to be aligning for him and he would like to see his senior year out the way he wants it to be –

Ruling the school. Big man on campus. Having all the chicks throw their panties….

Mineral Flats is a small town of 6,800 and he is a popular guy, has his pick of the women, and he plays football for a successful team –  and if there is one thing I’ve surely learned from my blog partner, football is a way of life in the south. He is also built and pretty easy on the eye. Starting quarterback is his for the taking and being the senior big man on campus is all but guaranteed. The problem is, Anders Kirkpatrick moves to Mineral Flats from California and he can play football, so he’s also in line for the starting quarterback position because he’s good. Not only that, he is good looking in that blonde, Californian laid-back sort of way. People at the school like him and within a month even Rob’s friends are drawn to Anders. To make matters worse, Rob’s girlfriend, Brittany, is breaking up with Rob so she can be available should Anders want her. He gets to the point where he cant stand the look of Anders and changes his gym schedule around so he doesn’t have to see him.

One morning on the way to the gym, the local radio DJ talks about the upcoming football game at George W Bush Stadium

“Will our dream team of Rob Baxter and Anders Kirkpatrick lead us to victory over our biggest rivals?”

“Fuck!” I spat angrily, clicking off the truck radio. “We’re a damn dream team now? Like some Siamese twins? Fuck that!”

This year was supposed to be the Rob Baxter Show and not some odd couple, buddy movie or situation comedy.

It was as if I couldn’t escape Anders Kirkpatrick.

So, Rob has some serious insecurities, anger and jealousies going on, and Anders is at the centre of them all. Not healthy, Rob.

Rob turns up at the gym early, and guess who’s there? Yep, Anders Kirkpatrick. And Anders tries his usual laid back conversation with Rob who doesn’t want a bar of it until Anders makes him have a conversation…and then some. The conversation, and the then some, is a great move as far as this reader is concerned. Rob has a WTF? moment at Anders hot kiss, and his groping in all the right places  –

As soon as his fingers grabbed hold of my dick, I realised something that I hadn’t before, my thick, eight-inch cock was as hard as a rock and a huge wet spot was decorating my jock.

“If queer stuff doesn’t go over in Texas your big longhorn apparently didn’t get that memo.”

Oh, it got the memo, it just didn’t read it until Anders came along.

Now it’s down to some manly football-jockstrap-wearing action between the quarterbacks….in a room at the school early in the morning. Why bother with the gym when you can work out in other ways – and I’m not talking about the football field.

There is a lot of hot sex from here with Anders taking some newly converted to the same-sex team action from willing convert, Rob.

“You ever been blown by one of them?”

“Never had a guy suck my dick.”

“Let’s see if we can change that,” Anders stated.

“You wanna suck my cock?” I asked, already knowing the answer. “You wanna wrap your lips around it?”

“Yeah! He exclaimed in a near carnal hiss. “And I like the dirty talk, man.”

Not going to give away anymore. Just know it is a big suck, fuck and pleasure-fest from here. These guys really are a dream team. And I do believe Rob learnt all about teamwork and how to play nice. Mmm, hmm.

I think this Is my new favourite GIF, mmm.

This sounds good. Love me some jocks. Love the decorations 🙂

This is good, Jana. I love me some sexy jocks too 😀