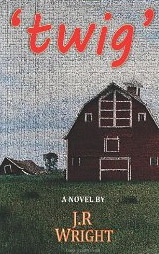 This review contains a lot of spoilers. Keep that in mind before reading. Also, my apologies for the length.

There are times when I read something and have to not only suspend any and all belief but to take what is written with a grain of salt and accept it and move on. That is the case with Twig. I have read the other (rather harsh) reviews and I basically knew going into it what type of story it would be. I didn’t go in expecting great literature and as a result, I wasn’t disappointed when I didn’t get it. It’s fiction. Great fiction? Oh no. Not even close but it was still an entertaining read for me for some reason. When I say you have to suspend belief, I mean you really have to suspend belief while reading this story. It’s so out there sometimes that I found myself laughing when I have no doubt I shouldn’t have been. The dialogue is seriously dated and not anything one would expect in day-to-day conversation. The characters are at times laughable and other times downright ridiculous. The romance, if one could call it that, is not the romance of the century. There is a bit of drama added to the story line but the mystery isn’t really one. The ending is a bit much and again, not realistic. This is not a book I would recommend to my book loving friends because they’d probably come after me with their Kindle pitchforks afterward. But I was entertained pretty much from the very first page for some very strange reason, even if it is something I normally would shy away from.

Willow, aka known by her late father as Twig. Willow is a thirty-eight year old virgin. I know, right? In the 21st century? Willow is not just a thirty-eight year old virgin, she is the most naive character that I have read about since (ugh!) Anastasia in the Fifty Shades books (yes, I just outed myself as reading that series). Regardless of how sheltered Willow had been her entire life, I didn’t buy her being so naive at 38. It bordered on ridiculous.

Willow’s demanding and strict father has just passed away and Willow has freedom for the first time in her life. Remember she’s 38. And a virgin. Anyway, Willow has spent most of her life taking care of the family farm. She’s a farm girl through and through. She knows very little of the outside world because her father felt that it was her duty to stay and take care of him and the farm 24/7 after her mother died years earlier.

Willow goes to her father’s bank to hear the reading of the her father’s will. Not only did he have one (and Willow was shocked over that fact) but he also left her a substantial amount of money in a savings account. Instead of being good and pissed because she and her mother had been forced to live in poverty when there was a lot of money in the bank, Willow pretty much accepted it and not long after went on a little shopping spree with some of her new-found cash. She also discovered sex for the first time in her life, though she has been fantasizing of a faceless man for years. I’ll get to the sex in a minute.

Advised to meet with an attorney in regards to the estate, Willow picks one who is new to her small town – one who wouldn’t be sharing her business all over the place. This attorney is Zachery (Zack) and his wife, Marie. The first meeting with Zack and Marie was interesting to say the least. And it also frustrated me to no end. Not the meeting per se, but where it looked like the author was going with that but didn’t. It was a good build-up for something that later fizzled and was not resolved in my opinion.

Willow later discovers sex for the first time after a night of drinking. Any other time this particular type of situation would anger me but it didn’t in this case. It did, however, cause me to say “huh?” later when something about the encounter was not disclosed or resolved in any way.

Zack and Marie show up at Willow’s place and they all commence to get drunk. Marie passes out and Willow sees them out the door. Moments later, Zack knocks on the door again (Marie is out like a light in their vehicle) and Zack takes the virginal Willow on the dining room table. He takes her hard (hello? virgin!) and then he leaves. Later, Willow and Marie become best friends and the dining-room-table-fuck is never revealed. There is not a repeat to the rough sex but I read the entire book waiting for Zack and Willow’s secret to come out and it never did. Also, the initial meeting with Willow that I mention above has Marie going off on Zack afterward because apparently he had had a lot of affairs and she was accusing him of wanting to fuck Willow. It turned out to be true but nothing else was ever said about it and Willow and Marie went on to become the best of friends with Marie having no idea that her best friend and husband had had sex only a few feet away from where she was sleeping in a car.

Then there is Lonnie. Lonnie is a drunk man who Willow meets in a bar a few days after her first sexual encounter. Apparently that first encounter got Willow’s juices flowing (pun intended) and she was eager to give it a go again, just not with Lonnie. He later changes that when he shows up at her place unannounced and becomes an employee at her farm. After a quick date away from their little town, the former virginal Willow has gotten bold and she and Lonnie start a hot and heavy relationship, albeit a very weird one.

One thing that absolutely annoyed me about Lonnie is a word he used constantly. Now keep in mind that I am a southern girl through and through but the overuse of the word Hooyah! was ridiculous. Do people really say that? Not in my neck of the woods.

Then there is Wayne, someone who has worked on the farm for years. Wayne is not a nice guy and this is proven as the story plays out. I can’t really say more than that without giving the so-called mystery part of the story away so I’ll stop with Wayne and his cronies. Suffice it to say that there is a LOT of danger, a lot of death, a lot of drama and Willow, Lonnie, Zack and Marie are right dab in the middle of it.

I have to agree with another reviewer who said this book looks like something written by a horny teenage boy at times. Willow’s encounters look like something written by one, especially in the beginning. I want to call this book erotica but I really can’t. As often as Willow does have sex, not all of it is on-page and the best encounter is probably the first one – the one she shouldn’t have had. The ones with Lonnie are a bit meh. Maybe I’m jaded when it comes to sex scenes in books after all the erotica I’ve read, but I didn’t find the ones in Twig to be all that to be honest. Granted, if one is not used to reading them I guess they would feel differently.

The resolution of the mystery is rather violent and again, very unrealistic. I mentioned the dated dialogue and sentences and I seriously found myself laughing out loud when I know I shouldn’t have. No offense to the author but some of it was seriously laugh-out-loud funny.

Willow really loves her horse. A lot. Hmm… so much so that after she masturbates it is described in detail how her horse licked at her front and spent so much time working his way around her ample, but firm breasts and nipples.

To that, I saw ew! but maybe that’s just me.

When Willow sees Lonnie nude for the first time (unknowingly to him), again her horse (Toby) comes into play (not like that).

Her first thought was Toby, when he let his male part dangle during those times when he was feeling frisky.

She tends to compare Lonnie and Toby’s “willy” often.

Then there is the first sexual encounter with Lonnie not much later.

‘This was animal-like,’ she stormed in her mind, having seen it a thousand times on the farm.

‘Lonnie Doolittle is an animal! A horse.

‘Better yet, a cantaur’ – and this thrilled her immensely! This seemed so carnal – yet so natural.

‘Back in the saddle again,’ raced through Lonnie Doolittle’s mind.

‘Out where a friend is a friend…’ He merrily and zealously continued.

This was while the two were in the middle of sex. I found it distracting as the reader is unable to focus on the act and is instead focusing on the two MC’s who are singing or talking to themselves inside their heads. It was odd.

The rest of the story is pretty much more of the same. There are a bunch of nosy town folk and someone who wishes to see Willow destroyed because of an issue at the farm. There are animals, sex here and there, violence, death, lots of shooting, a secret violent society, and a couple of very strange relationships. Lonnie has his own issues waiting for him back in Texas and any like I had for him throughout the book disappeared with the resolution of all of that. I went from thinking he was just this strange guy to seeing him as a horrible prick. Others might not feel that way but I do. The first and second halves of this book are as different as night and day. The first half has Twig discovering her sexuality and acting on it and then suddenly the second half takes off in an entirely different direction, leaving things from the first half unresolved completely.

Overall, the story is okay. There is a major overuse of exclamation points (a huge pet peeve of mine) and the characters mostly come across as comic relief instead of serious characters at times. No matter. I managed to finish the book so for that I’m adding a half star to my rating. For awhile there it was almost a DNF.

Hmm…NEIGH…is all I have to say 🙂

Thanks. I had fun reading it.