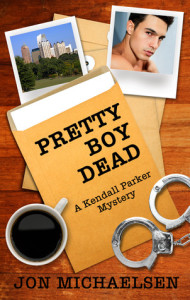 Detective Sergeant Kendall Parker (Parker)  is deeply in the closet. He lost his lover in an accident a few weeks prior and has only recently returned to his job at the Atlanta Police Department. His partner of three years Vincent Perelli (and others) have treated him differently but Parker can’t quite put his finger on why. Later Parker realizes that maybe they haven’t changed – he has.

When a young male is murdered, the case lands on Parker and Perelli’s desks. The murder is brutal and the victim is left unidentifiable. After a lot of detective work, the body is tentatively identified as male stripper Jason North, pending dental records. When it comes out that the victim was gay there is a public outcry from gay rights groups accusing the police department of not protecting the gay community. When another gay male’s body is found (much farther into the story) the outcry gets worse.

Parker and Perelli do everything in their power to drum up clues as to who killed the man but come up with little. Add to the fact that the police department (including Perelli) are outspoken homophobics and Parker knows that he will not get the support from his fellow officers in order to make an arrest. Add the fact that Parker is doing his damndest to keep his own sexuality a secret and the problems solving the case escalate.

Perelli’s abhorrence for homosexuals hadn’t eased over the years.

“Hell, this place ain’t so bad,” he sneered. “Despite all the fucking fags.”

“C’mon, lieutenant! There are gay cops in the department!”

The lieutenant bristled. “And none of them have ever or will ever make detective.”

“That runner could be a suspect  in the murder I’m investigating.”

“Of a fucking faggot? Do you hear yourself?” Hornsby dropped into his seat, snorted and cleared his throat before spitting into the trash can. “It’s a goddamned benefit to society if you ask me.” …. “I’d pin a damn medal on the son-of-a-bitch if I could,” he said, belching.

There are other characters who add to the story. There’s the owner of Metroplex, the club where the victim had worked as a dancer. This man is rumored to have mob ties but nothing has ever been proven. There is a city councilman who may or may not have a motive for murder. There are family members of the deceased and even his own best friend who conveniently goes missing around the time of the murder. Then there is Calvin Slade, a reporter who Parker has not had a good history with and who goes out of his way to print whatever is necessary to keep pressure on Parker and the police department. There is a gay hustler (who has AIDS) who adds to the story but not as much as I had expected going by the blurb. While I am sure that most reading about him may dislike him immensely, I felt sympathy.  It’s my mom instincts. I see a young, broken character and I want to reach in and fix them.

Early on the who and why in regards to the murder seemed fairly obvious. But then the author throws out clues that makes the reader think maybe they haven’t quite gotten it figured out after all. This was the case for me for sure. There is one thing that I can say that I most definitely did not see coming. This is a good thing because for awhile there I was beginning to think that the story was a little bit too predictable. Thankfully that predictability flew out the window.

The characters are all interesting. I never could quite get a grasp on Kendall Parker but I did not dislike him. I felt for him a lot in regards to the guilt he felt over the loss of his partner, Michael, though I do wish that I would have been able to feel the loss and emotion that Kendall did. While it was there, I didn’t actually feel it. The others in the police department (with the exception of a rookie, Brooks) are written as the perfect homophobic bastards.

There is a lot more that I wish to say about this book but I’m going to refrain. I would hate to say anything that may ruin it for other readers. I will say that it was an enjoyable read and the resolution was written well. Again, not what I expected and that’s a good thing.

The only issues that I had are as follows: One, there are a few editing issues. While they weren’t enough to be too distracting, they were still noticed.  Two, the story starts off quickly but I kind of felt at times like it was being bogged down with police procedure over the actual story. Don’t get me wrong, it was written quite accurately and I appreciate the research gone into making it so. I just felt that the book comes across as a little stiff at times as a result.

Overall, a good read. This is not a romance (by any means) so don’t go into it expecting one. It is a murder mystery with a lot of flawed characters – from Parker and his partner to the victim himself. It ended with the door open for more (obviously as it is the first in a series) so I will be curious to see what happens with Kendall Parker next.

I love the cover and the title is perfect for the story.

I like the cover too. Very nice review, Cindi 🙂

Wow – thank you very much, Cindi for such an awesome and detailed review. I am so glad you enjoyed my novel. Would love to know about those “pesky” editing errors if you happen to recall them so we can get those fixed before the print version comes out. Feel free to email me at michaelsen.jon@gmail.com

Thank you again for the review!

You’re very welcome, Jon. You surprised me a couple of times and that doesn’t happen often.

I’ll go through the book on my Kindle tomorrow and get back with you. The issues weren’t major and probably won’t be noticed by most people but unfortunately I catch everything. 🙂

Did you come across anything, Cindi? I have a chance to update any errors since the print hasn’t released yet – but my deadline is this Friday…I would greatly appreciate any feedback you can provide. THANKS!!!

Jon, sorry. I have been pulled in a bunch of different directions. I will send you an email.

Okay – thank you! I really appreciate you taking the time!!

You’re a good person Cindi, but it’s nothing a good line editor won’t find going through for the author. And I’m sure he would have one 🙂

Thanks, Kazza. I agree completely. 🙂