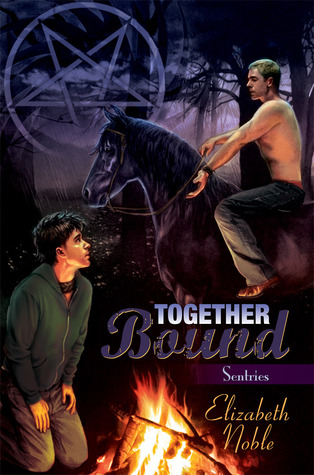 The World Todd and Nick live in there is no internet, no cell phones etc. The people are in class systems. The free people and the slaves.

Todd Ruger is a free man and can buy slaves if he want to, he is also a Master and a Shaman. He is a sentry = paranormal abilities and a hunter. He is mated to Nick Ruger.

Nick Ruger’s not a free man, a slave and has been hurt all his life. The slaves have no last name, they are first given one when they are with their owner and the slave does not know their parents. He is a sentry = paranormal abilities, he can see evil in people and monsters. He can see through their façade, see the real monster. He is mated to Todd Ruger.

Todd and Nick Ruger get a letter that force them to meet vice Chancellor Clarke Geoffrey, he needs their help because his friend Chancellor Shaffer seems different and doing things he would normally never do. Todd is angry that Clarke threatens his mate, and wants to scare him and say “what if I take your wife and do to her what I want to?” and he make a threat that even if he is a sentry then he will hunt down the monsters and kill them. That means also that he will do that if Clarke threatens his mate again.

Clarke Geoffrey wants their help as sentries, and knows that Todd and Nick are the best in the World. Only because Clarke tells about his family and who his father was, he gets the help from Todd and Nick. They need to get an undercover job in the Chancellor Estate and find out what happened to Chancellor Shaffer.

The Chancellor Estate: A place where orphans live, meaning the slaves owner never make sure the slaves have money enough to live their life free and have no house that is called orphans. It is a place where the slaves can live without fear of no food and shelter, they can make friendship with other slaves, read books, take care of the children of the free people and make friendship and sexual relationship with the chancellors on the Estate.

Nick are really no undercover, because he’s a slave and always will be a slave. Todd are given another name and will work in the security and meet Lawrence Witze.

The first few days it is quiet and they find out who Shaffer really are and then the question is, who chases whom? Because the monster has a way to know that both Todd and Nick are sentries. This monster is very old and wants to hunt and hurt both Todd and Nick. The monster also wants another human. The monster kills slaves too and the Estate’s a place where the evil can hunt and hurt others, this is a paradise for the monster.

Todd and Nick are in danger again and this time it almost costs them their lives, and people around will know the real meaning of a mated pair and how much love and strong connection they have.

Todd and Nick are the hunters and know about the paranormal world that others thinks are fantasy, they see monsters, ghosts etc. They will help others and get in danger to save others and the only thing they need to know is a “Thank you for your help” and do not force them to things they do not want, they will run away.

I Recommend this book to all that want a story about love, protection, and fighting for the right things. This is supernatural made gay and I love to read about Todd and Nick. The world and the rules are different and not all things are fair, about slaves and how the free people hurt the slaves and misuse their power, but also about someone like Todd that love, protect and marry his mate. He will do everything to make sure no one can hurt his mate, that he respect and love Nick, that they are equal. Nick have as much a say in things as Todd. 5 stars.

Thank you SO much for reviewing for us, Helle. I love your passion for the darker stories and it really shows here in Together Bound.

It is a honor to review for you, kazzak and I love to read dark books. I want to review more dark books and it is me to say Thank you for this honor 🙂 🙂 <3

Yes, thank you SO much for reviewing for us, Helle. The story looks like a really good one. Sometimes I like books a little on the darker side and this one looks perfect.

Great review and again, welcome to On Top Down Under.

I will now look at this series. I had never noticed it before Helle mentioned it.

Hi Cindi and thank you for the honor to review books in this genre and this book are a little dark, but not as dark as the Flesh Cartel. Kazzak the first book in this series, was a rollercoaster and make me cry a lot, this time I was more scared of the monster and crying for Nick, his feelings are a rollercoaster. I am more afraid for Nick safety, Todd are the Alpha and can survive a lot.

We’re thrilled to have you, Helle. I can’t wait to read more of your reviews. I am all about dark books and this one looks amazing. I will have to check out the series.

Thank you so much for such a great review. I’m honored and blushing.

Helle is very passionate about her reading and she will be reviewing more in the series soon, which we look forward to.

While I’m not a huge fan of slave stories, Elizabeth Noble﻿ has done a wonderful job of taking a series of Master/Slave fiction and turning it into a great love story. There’s action, drama, suspense, sex (duh), everything I love in a book, to the extent the slavery part is secondary. I highly recommend reading EVERYTHING she writes!

The series sounds very good, Dana Jeanne. Helle bought it to our attention with her review and now you have too. On the TBR!