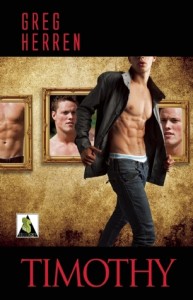 The perfect dead husband.  A new husband competing with a memory.  A nice update of a great classic.

I apologize in advance for the length of this review.

Timothy Burke was perfect.  His looks.  His body.  Everything.  He was loved by all and was the perfect young husband to Carlo Romaniello, a multimillionaire.  He was a former model who lived the life most men only dreamed of.  His looks carried him far in his modeling career and they became an almost obsession to Carlo.  Once he retired from modeling, he started a very successful underwear company.  On the outside, he and Carlo had the perfect marriage.  Until Timothy dies in a drowning accident.  Mired by grief over the loss of his young husband, Carlo closes up the home that Timothy loved, Spindrift, a gorgeous mansion on the shores of the Atlantic.  He spends most of the year after Timothy’s death traveling for business to keep himself away from the home that has been in his family since the 1800’s.

One day while on business, Carlo meets a young man and is instantly attracted.  This young man makes Carlo feel alive… happy… for the first time in over a year.  He is a breath of fresh air and Carlo insists on getting to know this man.  In only a week, they fall in love and are planning their upcoming nuptials.

The young man, Country Mouse as Carlo calls him, has been working for a popular magazine since the death of his father a year earlier.  Until his father’s death, he had been sheltered and as a result is dreadfully shy.  Losing his father, the only constant in his life, left him unprepared for the world at large.  At twenty-three he has no friends, no job, no home, no prospects.  A former student of his father ‘rescues’ him and offers him a job working for her magazine as her assistant.  She does not do this out of kindness as she is a horrible human being.  She feels that his father was the reason she was successful so she felt that by hiring ‘Mouse’ that she was repaying a debt.  It is while on a business trip with her that he meets Carlo by chance.  A week later, the two are married.

This starts with a long prologue.  I have read other reviews that state that the prologue is unnecessary.  I am inclined to agree with that.  It tells a lot about how the story will end if you pay attention to what you are reading.  By the time I got to the end of the book, I knew a few things already that I would have preferred to find out as they played out.

This is an updated, gay version, of the classic, Rebecca by Daphne Du Maurier, originally published in the 1930’s. It is described (by others) as fan fiction and while that may be true, it does not read as such.  You know going into the story (if you read the blurb or anything about the author in advance) what you will be reading so you should be prepared.  This was written much better than most fan fiction I have had the pleasure and displeasure of reading.  I read Rebecca many, many years ago and I found this to be a wonderfully updated version of the old story.

Told in first person by a narrator whose name is never given (hence Country Mouse) you watch as this young man quickly falls in love with a man old enough to be his father (though Carlo’s actual age is never given).  He leaves his miserable job and is thrust into a world that he is not prepared for.  He grew up with very little and suddenly he is living a life of wealth that he never could have dreamed of.  He’s married to a successful man.  He’s running a household full of servants.  He is expected to host extravagant parties just as Timothy had when he was alive. He moves into Spindrift with his new husband and his world is turned upside down.  Carlo becomes distant.  The servants are not welcoming. He is forced to stay in a separate bedroom than his brand new spouse, only seeing Carlo when it’s convenient to Carlo. He is left alone for days (and weeks) at a time while Carlo goes on business trips, refusing to allow Mouse to go with him.

Everywhere he goes, it’s Timothy.  Always Timothy.  His suite of rooms at the estate is, over a year after his death, exactly as they were when he was alive.  His desk still has the stationery bearing his name.  The servants and members of society are constantly comparing Mouse to Timothy, most of which are not flattering in any way to Mouse.  Timothy was perfect and a day does not go by without someone reminding Mouse of this and of the fact that he will never compare to the dead man.  He knows that he can never compare, in Carlo’s eyes, to the perfect dead husband.

All is not as it appears.

There is rampant speculation that Timothy’s death was not an accident and that he was murdered.  This, of course, is never spoken in Carlo’s presence as he is obviously still mourning the death of his young husband.

– Mouse.  To an extent.  I appreciated his background and the fact that he came from very little but worked hard to overcome this and become the perfect husband to Carlo.  On the other hand, I found him weak.  There are many times when he should have spoken up but he chose not to do so.  He allowed Carlo to abandon him within moments of moving into the family home.  He grew a pair toward the end and this salvaged my opinion of him.  I had sympathy for him throughout but that sympathy waned as the story played out.

– Timothy.  He was a true bastard and written perfectly, dead or no.

– The writing is perfect.  The author brings out all the emotions of Mouse and the other characters where you actually feel them, not feel like you are merely reading words on a page (or screen in my case).

– Valerie, Mouse’s former boss.  She is a perfectly written bitch.

– The secondary characters.  Everyone from the servants (good and bad) to the nosy, elderly next door neighbor.

– The mystery of whether Timothy was murdered or was killed in a horrible accident.  There is just enough speculation by Mouse (and others) to make the reader wonder what really happened to the man.  Clues are there that lean toward each…. it being an accident or a deliberate killing.  The reader is not told the real story until long into the book.

– The ending.  It was brilliant.  Even though I read the story Timothy was based on, this still came as a surprise and it was written perfectly.  I can honestly say that I did not see that coming.

– Carlo.  He is never around.  He refuses to share a bedroom with Mouse.  He treats him as a child, not a spouse. Instead of discussing things that are bothering Mouse, he runs instead of facing them.  He takes off on business trips that may last weeks at a time and refuses to allow him to accompany him.

– Carlo’s sister, Joyce.  I liked her character fine but her speech drove me crazy.  There were CONSTANT words CAPITALIZED in EVERY sentence she SPOKE.  Her dialogue was annoying beyond words.  To stress particular words, the author should have used italics, not the cap key.  This has the same effect without making the reader want to throw the book or (in my case) the Kindle every time the character is in the story.

– This is a romance of sorts but yet the two main male characters are rarely together.  Remove the prologue completely, then add a week in the very beginning and then the last few pages of the book and there is the romance.  I could not get a feel for Carlo and Mouse as a couple because they shared very little time together.

– The insta-love between Carlo and Mouse.  They meet, they spend a bit of time together over a period of days and then they are suddenly pledging their love and getting married.  But honestly, to even call it love on either part is a stretch in my opinion.  I never saw it between the two at any time during the book with the exception of the very end.

– There is no intimacy between Carlo and Mouse at all.  There is zero sex in this book (only mentioned off-page once) and that was okay as it would not have been missed had there been some sort of touching or kissing or even hand-holding… or any kind of real interaction… between the two men.  There was none.  Without this, I had a hard time coming to terms with them as an actual couple.  A few times it was mentioned that Carlo came to share time with Mouse in his bed but never anything more.  No mention of any type of touch at all and Carlo never once spent the entire night in the bed of Mouse.

– There is an instance with a servant that I never felt was resolved.  Without giving a spoiler I am unable to say what that was.  I just wish more had been said about what happened to that particular character.

Overall, I have to say that this is a very well written and entertaining book.  The author took an old story and changed it up a bit and made it an excellent read.  There are a few things that bugged me but not enough to take away from my enjoyment of the story.  I will definitely read more by this author.

The cover is perfect.

Previous post
Night of the Werecock (The Graves Delight #1), Rosemary Cross
Next post
Promises in Every Star (Anthology), Todd Gregory