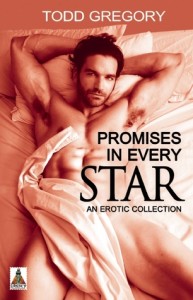 Tags:  Anthology of Various Themes, Spanning Contemporary, To Paranormal/Fantasy to Erotica and Stories with Depth/Meaning

Promises in Every Star

Dennis goes back to his hometown for his 25th high school reunion.  He’s successful and unlike when he was in school, he’s out.  A bittersweet story about reconnecting with the one who could-have-been.

Tell Me a Lie

A random pick-up at a bar.  When they get back to one’s apartment, it doesn’t quite go as expected.

All The World’s A Stage

A crowded bar.  A female impersonator, her two guys and really, really hot sex on stage.  Toss in a boy young enough to be one’s son and it’s one hell of a hot short.

A lonely man picks up a black-haired, tattooed stranger while walking home late one night, a man named Angel. Even for a short story, I felt that things happened way too fast and I’m not just referring to the sex that happens within minutes of the two men meeting.  Good story but just a bit much.  I wasn’t thrilled with the ending but it was expected.

Desire Under The Blankets

A fraternity ‘big brother’ secretly longs for his current pledge, terrified of losing everything if he reveals his feelings in a fraternity that is not gay-friendly.

After the devastation of Hurricane Katrina, a man meets with a FEMA inspector and gets more (much more) than he bargained for.  A very sexy read.

A man develops a crush on a popular baseball star, lusting after him from afar, knowing the man is out of his league.  Or is he?

What a Friend I Have in Jesus

I have to say that I’m not a fan of the title of this one.  At any rate, a good story about a man forced on a cruise by his best friend who is miserable and lonely until he meets a dancer at one of the ports.

Son of a Preacher Man

Ah, of course there had to be one thrown in about religion.  Then I saw it was set in a small Alabama town so we knew what was coming right? Sure we did.  I knew this anthology was going too well.

Two teenage boys who live in a small, southern town sneak out nightly to be together.  One is the son of a local preacher.  The story would have been okay had they not done what they did where they did.  Personally, I found that offensive.  Perhaps that stems from the fact that I live in southern Alabama and how I was raised.  I mean no offense to the author (who I know also lives in the south).  It just wasn’t for me.

Who doesn’t have fantasies about a younger pool boy?  What if that fantasy can come true and in the process you can get revenge on a cheating lover?  Hot, little story about fantasies coming true.

The Sound of a Soul Crying

Galen, a physician, has been having odd dreams for years.  Somehow, he knows that these dreams are about real people and that his dreams help these people.  He doesn’t understand but he knows in his heart that it is true.  The dreams cause debilitating headaches for Galen but he refuses to take medication that would put him into a dreamless sleep.  Lately he has been having dreams of a blonde man.  While on his way home from work one night, Galen sees the man on the street and this convinces him of what he has always known was true… his dreams are real.  What happens when Galen is able to touch, to make love to… the man in the dreams?

This is my favorite of the anthology so far.  It is one of the few where it looks like there could be a real happily-ever-after and not a happy-for-now.  Great story.

The Sea Where it’s Shallow

After reading the others in this anthology, I was in no way prepared for this one.  This tells the story of a young man, Tommy, on the eve of going to war.  He has always known he was gay but he joined the military in hopes of becoming a real man and to get away from the small Mississippi town that he grew up in.  The day before shipping out, he meets Todd and has his first sexual experience with a man.  This is told in Tommy’s point of view in an unsent letter that he wrote Todd while overseas.  It also shows Todd’s point of view from the moment he meets Tommy in a bar.  I admit to crying while reading this one.  Such a touching story and the way the author wrote Tommy’s story simply broke my heart.  A beautifully written story.  So much said in only a few pages.

Man in a Speedo

A creepy little tale of one man’s obsession with a man wearing a yellow speedo.

A hot new neighbor.  The perfect view of the neighbor’s bedroom.  One man gets one hell of a show after being awakened in the middle of the night.

Will You Still Love Me in September?

The ugly duckling turns into a swan and is, for the first time in his life, wanted and lusted after.  He has a long-distance relationship with Kevin, a man he truly loves but he knows he can not be faithful to… and he hasn’t been. This tells the story of a one-night-stand and the guilt of knowing that it would destroy the man who loves him.. who lives over 2,000 miles away.

Tied with Son of a Preacher Man for my least favorite of the anthology, because of the cheating aspect.

An odd story about a vampire who allows his need for blood to overtake him.  When he meets an old fraternity brother (who long thought him dead) on the street, he feeds from him but all is not as it seems.

This was more confusing than anything else.  I am not sure how I feel about it.

Someone to Lay Down Beside Me

A man in love with his best friend.  The best friend only wants friendship so he picks up another guy and takes him home.  That’s pretty much the entire story.  Not bad.  Not great.  Just a quick sex scene between two strangers with the best friend thrown in (in the background) as an afterthought.