Something New Under the Sun (Falling Sky #2), L A Witt 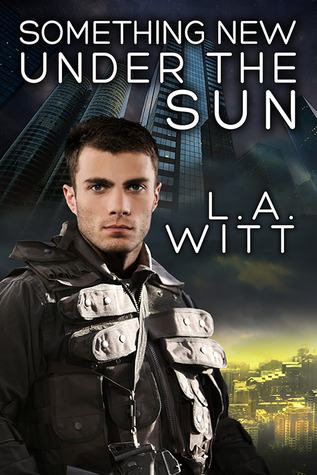 What do you get when you team a  modified vampire assassin with an anti-mod cyber whizz with an axe to grind? A hell of a lot of pissed off retribution and action that’s what.

This book takes place twenty four hours after A Chip in his Shoulder concludes, with Daniel and Liam now living at Liam’s place in the Gutter. They’re on the down-low as they’re wanted men – Liam helped Daniel escape house-arrest rather than making a hit on him as he was contracted to by Daniel’s father. Nice dad.

Daniel has been keeping tabs on his fathers business, Cybernetix, and all it’s dodgy dealings. Including a nasty biomod and a withheld UV mod prototype. Both designed to play around with the vampires and milk more R&D money into Cybernetix coffers. Of course, Daniel and Liam can’t stand by given the hit, the corporate thuggery, and they’re status as marked men. There’s also a bit more at stake for Daniel but you will have to read to see what I mean. No way am I’m giving that twist away. So it’s back to the Sky for an action packed confrontation with Daniel’s father; with the help of Gutter cyber-techie, Gizmo, and Sky anti-mod activists, Venus and Felix.

The writing was excellent. It was a perfect mix of technical, action, sex, and world building. I wanted  a more gritty edge for this book, well…L A Witt nailed it in Something New Under the Sun. There was a real sense of a divided society and class –

…..I didn’t see anyone glance at the passed-out drunk, the rat lapping at a pool of vomit beside him…No one seemed to notice the man with the pants around his ankles fucking a barely dressed woman against the graffiti-covered bricks. I couldn’t decide whether the woman looked bored, wasted, or both. How did a world like this exist so close to the Sky? The sleek glass landscape to which I was accustomed was mere metres above that opaque, seeming impenetrable haze hanging over the decaying streets and buildings.

This time the POV is Daniel’s. Book #1, A Chip in his Shoulder, was Liam’s. So two books, two different perspectives. Perfect balancing act achieved.

There is plenty of action. The book rarely slows down –

The lab erupted with choking and gagging. Gunfire cracked through the white haze. A bullet whistled past my head and glass shattered. I fired back, and then ran like hell.

“Why must so many of your plans involve dangling from ropes in high places?” I asked.

…and when it does slow down, slightly, it’s because there is something integral to the plot or storyline happening –

“Vampire self-healing is all well and good, but nanobots do it faster and more efficiently.” He paused. “And if my body rejects a mod, the nanobots are programmed to neutralise the antibodies at least until I can get the mod out.”

…we landed on the floor between the weapons and cases. Before I could ask Liam if he was all right, or if he landed on anything else, he raised his head and kissed me hard, and our cocks ground together through our clothes, and fuck it, he was fine. We were both beyond control now.

This is predominately a cyberpunk, fantasy read, with a hint of paranormal; I say a hint because Liam being a vampire isn’t played up a lot. And everything serves a purpose and everything fits together beautifully.

I liked that concept of the mods. It made me think – are mods good, bad? Or are they what you make of them? I’m being cryptic….

I can’t say a lot without giving away spoilers, but what I can say is if you like L A Witt, if you like futuristic, dystopian, techie reads (Cyberpunk) with some very likable characters, including the secondary characters. If you also like smart writing and plenty of action, then this book should not be missed. Highly recommended reading. Loved it!