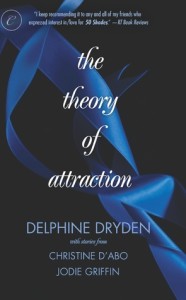 The Theory of Attraction by Delphine Dryden

Camilla (Cami) is attracted to her scientist neighbor, Ivan.  She has not had sex since the end of her last long-term relationship two years prior and for some strange reason she has started lusting after Ivan even though Ivan has never shown any kind of interest to her other than a warped neighbor type friendship.  Ivan is the stereotypical nerd genius. Full of book smarts but lacking in personal interaction skills.  An important event is about to occur in regards to his job so he asks Camilla to help him learn social skills so that he will be able to interact with his peers.  This is very important for Ivan and his professional career.  Cami jumps at the chance to spend more time with Ivan even if the time spent will be about making Ivan sociable.  What begins as Cami teaching Ivan quickly turns to Ivan as the teacher and Cami the willing student.  Ivan has secrets…. secrets that surprise Cami.  Until the moment the relationship turns, Cami is convinced that Ivan is boring… staid.  He lives by the same exact routine day in and day out.  When he finally (finally) makes a move toward Cami sexually, it is not at all what she expects when she set her sights on him.  Ivan is a Dominant and heavy into the BDSM scene.  Over a period of a few short weeks, Ivan introduces Camilla to things that she had never dreamed of much less expected to ever want to be part of.

I have to say that while I did, in fact, enjoy this story there are a few things that had me shaking my head.  I love the fact that Ivan is a nerd. For some reason, I get off on those types of characters.  I love how he is socially inept and he needs Camilla to help him learn how to function in social situations.  What I did not like was Camilla and the way the sexual relationship played out.  This is by no means my first BDSM book and if anything, what I normally read is much, much more graphic and involves more play.  Camilla just came across as much more naive that I felt she should have been… in regards to certain aspects of the sexual relationship.  Without typing a spoiler, I can’t point out the specifics. There are quite a few moments that Cami found shocking.  I personally could not figure out what was so shocking about them but again, that’s just me.

I liked Ivan early on.  I mentioned loving nerd characters.  He’s described perfectly and the author does an outstanding job of laying out every single aspect of Ivan’s nerdness.   My only issue with his character was his lack of personal compassion.  Being oblivious is one thing.  Not knowing that you are being hurtful (emotionally) is another.

A Shot in the Dark by Christine d’Abo

When I started this, I had no idea that it was the second in a series by the same author so I was not familiar with the characters or the back stories.  That did not seem to matter as I was able to jump right into the story of the two main characters (Paige and Carter) and even became eager to read the next in the series about Paige’s brother, Ian (something I will do as soon as I complete this review).  I have to say that I enjoyed this story much more than the one before it though a couple of things (toward the end) bugged me a little.  These things were not enough to detract from my enjoyment of the story as a whole.

I adored Carter from the get-go.  Everything about him.  He’s the perfect Dom and the perfect character in general. He understands Paige’s fears and instead of pushing her beyond her limits, though not gentle, he helps her to overcome what happened with her last Dom.  This is not an easy task especially when Rick discovers that she is back in the scene and decides to cause more trouble.

This one was a DNF for me.  I tried.  I really tried.  But I had major problems with a couple of things.

Jess and Alex have been married for over fifteen years.  They have two children and have always had a good, stable relationship.  One day Jess discovers a sexy book in a bookstore and buys it on a whim.  The book is fiction about people engaging in BDSM.  Suddenly she is buying as many of these types of books as she can and secretly fantasizing about what happens in each.  Her sex life with her husband improves greatly but as soon as he pulls out, she is so full of guilt over her fantasies and her books (that she keeps hidden from him) that she turns away from her husband and distances herself from him.  I stopped reading shortly after she told Alex what her problem was and why she has been so distant.

Here are my problems with the story and why it seemed so unbelievable:  Fifteen years of marriage.  Fifteen.  The relationship is described as almost perfect in every other regard than Jess’s shyness in the bedroom.  What did I see?  Total lack of communication.  Did I mention they have been married for over fifteen years?  While the book explains why Jess is so shy about talking to Alex, I still cannot get beyond the fact that they have a ‘perfect’ marriage otherwise. If so, I would guess that they communicate on other issues but not in the bedroom?

I’m sorry but I couldn’t get beyond that nor could I get beyond the fact that someone (after fifteen years of marriage and having sex) would feel so guilty about fantasizing during sex.  I know that there is a chance that the story may have improved had I continued but the other stuff would have overridden that.  I’m sure this would be a great story for others but it simply was not for me.