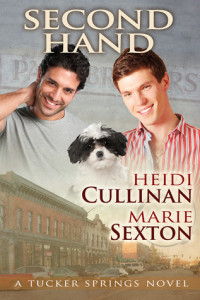 A great opposites-attract story.  The second in the Tucker Springs series.

Paul Hannon moved to Tucker Springs for one reason:  his girlfriend of seven years, Stacey. The town is artsy and Stacey calls herself an artist.  They rented a house with a long list of problems, the worst of which are electrical problems.  Stacey filled the home with every type of expensive small appliance you can imagine, always wanting more, more more… that more being whatever she felt others may have.  With eighteen months left on the house lease, Stacey finds her another man who is better off financially and moves on, leaving Paul stuck with the house, the small appliances and Stacey’s junk art.  With hopes of winning her back, Paul makes a trip to the local pawnshop, Tucker Pawn, to find Stacey the perfect birthday gift and meets Emanuel (El) Rozal, the owner.

El is a cynic.  He doesn’t do relationships.  He doesn’t believe in love.  He has watched others who were convinced they had found it only to see them fail.   Then he meets Paul.  El is instantly attracted  but Paul is straight.  No way will El go after a straight man, especially one still hung up on his ex as Paul so obviously is.

A nice, but inexpensive necklace is purchased and Paul gets the reaction that he is expecting.  Stacey is not only not interested but she tells Paul to never contact her again.  She has her wealthy new boyfriend and she has no use for the old one who couldn’t give her everything she wanted.  Dejected, the next day Paul returns to the pawnshop to return the necklace only to have El take him out for drinks at the local gay bar, Lights Out (owned by Jason, a main character in the first of the series).  This begins a quirky friendship between the two men.

El comes from an unusual family. His mother is a hoarder who embarrasses the family.  It is obvious from her introduction that there are psychological reasons for why she collects and saves things.   His sister is a habitual dater with several children with different fathers.

Deciding to rid his home of everything Stacey, Paul starts pawning all of her small kitchen appliances.  To keep Paul coming into the shop, El convinces him that he can only accept one item a day.  Every day for awhile Paul makes his trip to the store with another piece of Stacey’s junk and over time he and El become friends, sometimes leaving and doing other things (rollerblading being one of them).  It doesn’t take long for El to see that perhaps Paul is not quite as straight as he appears even if Paul is in denial.

Paul is extremely naive.  I had a difficult time wrapping my mind around a man his age (late twenties?  thirty maybe?) being that naive.  It was cute in the beginning but then it got kind of tiring.    El takes advantage of the naivete to keep Paul coming into his shop.  That, while totally wrong, was perfect.  Sure, El was wrong to do that but it brought Paul back into his shop and a friendship is born from it.  It doesn’t take long for El to want more… to feel more.  It is obvious that Paul is feeling something for El as well but he is unable to move on until the Stacey situation is resolved and for some reason, Paul can’t seem to let her and their former relationship go.    Of course, each time Paul begins to feel that he can possibly move on, Stacey makes an appearance. Stacey is the perfect selfish bitch.  She broke off the relationship with Paul but expected him to be available each time she had a fight with her new man… and he was… often.   It takes awhile for Paul to see that Stacey is not the future he wants, El is.  The way Stacey is finally out of the picture is perfect.  I could not have imagined a better way for that to happen.

El had been introduced in Where Nerves End, the first in the Tucker Springs series written by L.A. Witt.  He is only a minor secondary character in that book but you still get a feel for him.  I simply adored his character.  Paul was a good character as well, his naivete aside.  It was fun watching Paul as he realized that those feelings he had denied for so long were okay.  His mother makes an appearance and is amazing.  She’s the perfect mother of a coming out gay man.

El and Paul are as different as night and day.  El is the laid back owner of the local pawnshop.  Paul is a receptionist at a veterinarian’s office. El has street smarts.  Paul is extremely naive.  El has always been comfortable with his sexuality.  Paul is only now discovering his.

It was a pleasure watching El finally realize that perhaps love is possible after all.  Paul realizes, after a lot of soul-searching, that feelings he has denied most of his life are okay and that being with El is so much more important than having the wife and picket fence that he always thought he wanted.

Overall, this was a very good story.  I thoroughly enjoyed it from beginning to end. The only issues that I had with this book are the alternating points of views.   They were all over the place and I found myself confused often. While I enjoyed being in the heads of both characters, I had to go back quite a bit while reading to figure out which character was which.

There is a great group of secondary characters that add to the story.  Seth, my favorite secondary from the first book pops in a time or two. Jason is mentioned but not Michael (the other main in the first book).  A cute puppy, Mojo, is also part of the story and added a bit of the ‘aw’ factor.

This is a great addition to the Tucker Springs series.  I am eager to read the third one.

This book was provided by Net Galley and Riptide Publishing in exchange for a fair and honest review.