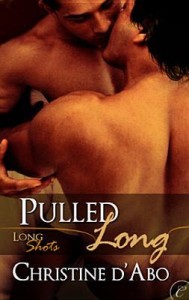 Two hot men, one bi.. one gay.. dance around each other for months before finally coming together.  Throw in some hot sex (and exhibitionism) for a super hot read.

I did not even know this book existed until I read a M/F anthology recently that included a book by the same author.  It was the book before this one in a series.  That particular story, A Shot In The Dark, laid out Pulled Long and I could not wait to read this one.  M/M is my genre of choice these days so it was a pleasant surprise to see this book (especially after the anthology I read was very hetero).  A lot happens (the build-up) with the two main characters, Ian and Jeff, in the first book that leads them to the beginning of this one so I will be referring to both stories in this review.

This book was hot.  There is no other way to describe it.  The men are hot.  The sex is hot.  Hell, even the secondary characters are hot.. male and female.

(Don’t you just love how a straight female can say a woman is hot but a straight man acts all funny about saying the same about a man???   Don’t blast me for that comment.  I live with 4 straight men.. I’m saying that from experience).  😉

Ian co-owns a coffee shop with his two sisters.  He has had a difficult life, mainly with specific family members and in love.  The last real relationship he had was with a bisexual man who left him for a woman and then blamed him for his urges toward men.  Ian is convinced that bad things happen to everyone he loves so he shies away from getting too close to anyone.  His father blames him for something major that happened because Ian is gay.  The old boyfriend blamed him for his attraction toward men.  Instead of focusing on finding that special someone, Ian immerses himself in running the coffee shop, never taking any time off for himself.  He works long hours and avoids all things personal with the exception of his close relationship with his sisters.

Jeff, or Blue Eyes as he is described in A Shot in the Dark, is a regular customer in the coffee shop.  Ian and Jeff flirt back and forth and it looks like Ian may be stepping away from his “no relationships” rule.  Ian doesn’t even know Jeff’s name at the time but it doesn’t matter. There is definitely something there.  The two men dance around each other for months and as soon as Ian is ready to move things along he finds out… accidentally… that Jeff is in the middle of a divorce… with a woman.  Ian refuses to have any kind of relationship with a straight man looking to experiment or a bisexual man who will probably dump him for the next pretty female that comes along.  An argument ensues and Ian throws Jeff out of the coffee shop saying he never wants to see him again.

This happens in the first book, building up to Pulled Long.  You don’t have to read the first one (whose mains are a male and female) to get this one.  It just helps to understand where the characters are coming from.

Months later, Ian is once again working late in the coffee shop.  It’s after midnight and he still has an hour or so of paperwork to be done before retiring for the evening.  He’s dead on his feet and eager to be done and gone.  He happens to look out the window and standing across the street in the storming rain is Blue Eyes.  He reluctantly lets him in the shop and after a formal introduction between the two, they are getting busy in full view of the window. The lights are on and anyone walking by would be able to see them.  The thought of being seen while having sex is thrilling to Ian.  This begins the relationship between the two men.

Did I mention this book is hot?

Ian agrees to go on a real date with Jeff.  This date turns into a hot evening at the local sex club, Mavericks, where they ‘perform’ while others watch.  That was sexy as hell.

There is a lot of public sex in this book.  In fact, the two men do not even make it to a bed until long into the story.

Ian’s doubts come back full force after a bad experience (one of their public romps) when they are found out.  While not actually seen performing the act, the consequences could be devastating for Jeff and his business.  Jeff doesn’t blame Ian but Ian doesn’t hang around long enough to find this out.  He takes off and hides from Jeff and the rest of the world, only resurfacing long enough to immerse himself in working himself to death at the family business.  It takes a lot of soul-searching and a bit of time for Ian to finally learn to trust that what Jeff feels for him is real,  that he is not a “straight boy experiment” and that he won’t be running off with the first pretty girl who shows interest.

Overall, this was an excellent book.  The sex scenes are amazing.  Each time (other than one time I think in the bedroom) they are either in full view of others or where they could be discovered at any moment.  The love story between Ian and Jeff is written very well.  This is not insta-love because they flirted for months before finally coming together.  This has quite a few sex scenes, but it also has a story.  A good story about two men who finally find each other.

I’m not a fan of menage type or even M/F books these days but I will be going back to the start of this series and reading the first one and the one after this one (each are m/f menage I believe) soon.  This author has definitely gained a new fan.