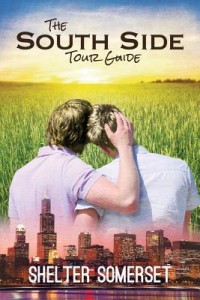 ***Do not read if you have a problem with spoiler-ish reviews.  Certain things are listed that one might call spoilers.  Keep that in mind before reading this review.***

After being unemployed for a year, Andrew (Andy) Wingal starts his own company driving tourists to the seedy part of Chicago night after night where they can witness real crime in real time.  It’s dangerous but it pays very well and he has no shortage of customers.  He has a tricked out, bulletproof van that keeps the tourists and himself safe for the most part.  Popular with those eager to see crime up close and personal, he is not with the local police department.  One member of the police force is Andy’s boyfriend (I use that term lightly), Ken.  Ken is controlling, he’s in the closet and he’s a brute.  From the onset, I was not sure what to think about Ken and Andy’s relationship but more comes to light later when Ken does something I found to be odd.  He is in the closet.  He and Andy never go anywhere together because Ken wants to keep his sexuality a secret but yet he does something later that goes against all that.

When one of Andy’s tours puts him in a bad position with the police department, he is ordered by Ken to leave for awhile until the heat dies down.  He takes off to visit his former brother-in-law who he hasn’t seen in over three years since something happened with Andy’s sister, Lillian.  Harden and Lillian had two children.  Mason is eleven and Olivia is seven.  Harden and the kids accept “Uncle Andy” without question and he quickly becomes part of the family once again though the housekeeper hates him on sight.  It doesn’t take too long before Andy and Harden become close friends and later, more.

Harden has had a hard time being a single parent.  He has a job he hates, a housekeeper and a coworker who have the hots for him and two demanding children.  He is stressed to the max with no end in sight until Andy comes to visit.  Suddenly, the children are happy and Harden feels like he can breathe again.  He still hates his job but suddenly his life is more bearable.

I found this to be enjoyable but there were a few things that had me shaking my head and a couple that bothered me.

–  I love books that have children in them and Mason and Olivia are written well.

–  I did not like the housekeeper at all and could not understand why she, as a paid employee, was allowed to act the way she did toward Andy, a family member and guest.

–  Harden has never been with a man before and still lusts after women but yet he jumps right into a sexual relationship with Andy without thought or reservations … and with zero prep… ever.

–  I never felt the relationship between Andy and Mason.  I felt the friendship, a little sex,  but nothing more.

–  Ken is a bastard and this is obvious from his introduction.  However, he and Andy are still in a relationship when Andy begins a sexual relationship with Harden.  Also, there is a matter of a kiss that Harden gave Andy years earlier when Harden was still happily married to Andy’s sister.  The explanation (later) bothered me.  When asked by Andy why he had kissed him all those years ago,  “Who knows,” Harden said, shrugging and sniggering, “maybe that’s why I did it.  Lilly’s pregnancy made her less affectionate.”   Anyone reading that statement who knows me at all will know that angered me.  Blame the wife (who was only a few feet outside the door at the time) for your wanting to kiss her brother?  Because she’s pregnant?  That kind of ranks up there (to me) with “My wife doesn’t understand me…”

– This is a rather long book and at times came across as mundane, routine.  There is a lot of telling without showing.  Even with the cheating thing, I did find myself rooting for Harden and Andy but I could never fully grasp their relationship as being anything more than friends with benefits.  The children added a lot to the story… perhaps too much as each and every detail of their days and evenings are described in detail.

–  In the beginning, Harden’s days as a single father are described in detail right down to his frustration over every little thing with his children.  I have no doubt the author was working toward gaining sympathy for Harden because of his stress of new single fatherhood on top of a demanding job and other obligations.  Instead, what he got from this reader was the thought “Women (and a lot of men) do this every day. Buck up and do what you’re supposed to do or find someone else to do it for you.”

–  I like the mystery of Lillian, Harden’s wife.  A lot is alluded to but what happened to her three years prior is not revealed until a bit into the book.

Overall, I did enjoy this book even with the issues mentioned above. I was able to get beyond the cheating thing (for the most part) though that is usually game-over for me.  I do wish I would have felt the relationship more.  Andy’s Chicago issues get resolved quickly as well as the Ken situation.  The ending was eased into without any type of major event… it just happened.    Nice cover.