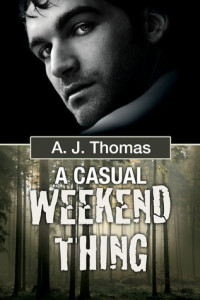 One of the best debut novels I have ever read.

Doug Heavy Runner was an openly gay police officer in Miami when he was forced back home to the Salish-Kootenai Indian Reservation in Montana when his mother got ill and later died. Two years later he is the only nonwhite deputy in the small police force in Elkin, Montana and is forced to prove himself day in and day out because of his race.  His sexuality is hidden as exposing it to even one person would add to the difficulties he already faces each day. Doug is also the leader of a search and rescue volunteer group.

Christopher Hayes is an openly gay San Diego police detective.  In his early thirties, he has spent the past two decades running from an abusive past.  He has created a new life for himself and has left his past behind. His brother, Peter, was a pedophile who prayed on young people with one of them being Christopher when he was only a preteen.  Christopher has been running in more ways than one. He is an ultra marathon runner who uses his running as a sort of therapy. He has a handsome but straight partner, Ray, on the police force who he has secretly been in love with for four years.  He knows Ray is straight as the man is constantly parading his latest one-night-stands in front of Christopher.  Either way Christopher knows better than to get involved with someone who is supposed to watch his back so he keeps his fantasies and feelings to himself.

During a search, Doug must rappel down a mountain to retrieve a suicide victim who turns out to be Peter Hayes, an ex con who has been living in Elkin.  Seasoned officer or no, Doug is disturbed by the state of the body and markings that are cut into the man’s arms.  The disturbing feeling gets worse when Doug must go to Peter’s house and walk inside.  The smell inside the house is disgusting.  Attached to the front door there is an envelope from the dead man addressed to his little brother, Christopher.  There is no contact information for Christopher… only a suicide note addressed to him and a quickly written will leaving everything to the man. Unable to find this person, it is left up to the local Sheriff (and Doug’s boss) to locate him to come and identify the body and deal with his estate and remains.

Christopher has been recovering from a gunshot wound received in the line of duty.  He is unable to return to work until he is cleared by his physician.  This is not likely to happen anytime soon so when his superior informs him of his brother’s death he makes a trip to small town Montana, fighting it every step of the way.  He hated his brother with every fiber of his being and was not even aware the man had been released from prison.  A few hours outside of Elkin where his brother’s body is, he stops at a hotel and decides to check out a local gay bar. There he meets Doug, the only person in the bar older than early twenties.  It doesn’t take long before the men are in Christopher’s hotel room and spending the weekend together in bed.  The weekend ends and no contact information is exchanged.  It was a casual weekend thing. Little does each man know but they will be forced together in a big way in only a matter of days but in an official capacity instead of personal.

This begins the absolute craziness of one of the best books I have read this year.  There is more to Peter’s suicide than meets the eye and it is left up to Doug, Christopher and various FBI agents to discover the secrets the man took to his grave.  It’s discovered early on that Peter was a horrible, horrible human being.  The author does not shy away from what he did in his past nor does she gloss over much.  Everything is there for the reader to see within reason. There are small town politics, racism aimed at Doug, a psychotic ex, a partner (Ray) who the reader will despise one minute and be laughing at the next.  There is a lot of mystery, a lot of violence including a couple of hospital visits and a kidnapping.  And through it all there are Doug and Christopher who can’t seem to keep their hands off each other.  The sex is hot as hell and the chemistry between the two men is scorching.  As the mystery behind Peter’s secrets starts to come to light, there are quite a few casual weekend things.  Each man begins to feel something strongly for the other but know that a relationship is not doable with both living in different parts of the United States.  It takes one almost dying before they finally get it together and admit that they both want more regardless of their living locations.

There is so much more that I can say about this book but I’m choosing not to.  In no way would I want to spoil this for other readers.  I absolutely fell in love with Doug and Christopher. Both are so stubborn but the reader is able to see why almost immediately.  Ray, Christopher’s partner, I mentioned.  I wanted to hate him so bad and I did for part of the book but later on he had me laughing out loud.  There is a cast of secondary characters that are integral to the story.  The mystery is written perfectly and I admit that it took me long into the book for me to figure it out. Normally I can figure these things out early on which is one of the reasons this book was so good for me.  I consider a book to be outstanding when I can say “I did not see that coming” more than once.  Christopher is ADD and it was charming in so many ways.  His running is not just a means to stay in shape.  It’s an addiction and it literally keeps him sane.  Doug is an all around nice guy who wants happiness but feels that it is beyond his reach. Throw the two men together and it’s perfect.

I highly, highly recommend this book to anyone who is looking for a hot romance, a good mystery and who do not mind a few cringe-worthy situations.  It is an excellent book.  The title is perfect and so fitting for the story.  This quickly jumped on my list of all-time favorite books. I will be seeking out anything this author puts out in the future.