At twenty-seven, Tamelik has been a slave more than half his life, having witnessed his family being murdered in front of him when he was just a child. Naturally submissive, although with a petulant streak, he can’t help but fall in love with the master who treats him kindly.
Tam’s dreams come true when his mistress walks out, leaving her husband behind. For six glorious months, he and his master get to be together. Then Tam is ordered to purchase another slave.
He wants to hate Kai for being unruly and ungrateful. For being of the same race as the men who murdered his family. For being his eventual replacement in their master’s bed. But it’s hard to hate a man who cries himself to sleep, flinches at the slightest touch, and blushes beautifully when he’s kissed.

Seducing Kai has suddenly become more challenge than chore, and with his master’s encouragement, Tam finds himself falling for his new companion. Except… nobody can be in love with two people at once, can they? 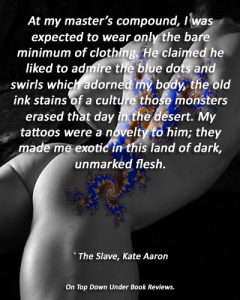 The official blurb is good, it gives any interested reader a lot of the basics. What it can’t tell you, however, is how beautifully the book is written, how sexy it is, and it definitely can’t tell you just how engrossing the story is. Because it is. Seriously engrossing. The characters come to life in front of you. I felt like I was in Otiz. I felt like I was with these guys as a fly-on-the-wall voyeur.

Tamelik is a pleasure slave, his family were killed by soldiers, and he was sold off when he was twelve. He has been with his master for fifteen years, since the Cage. His master is a wealthy underlord in the desert outpost of Otiz. Even though Tam is a slave, Master is good to him. Tam loves his master but feels the love is not reciprocated. Master may be good to him, he may punish him, or take him to his bed, 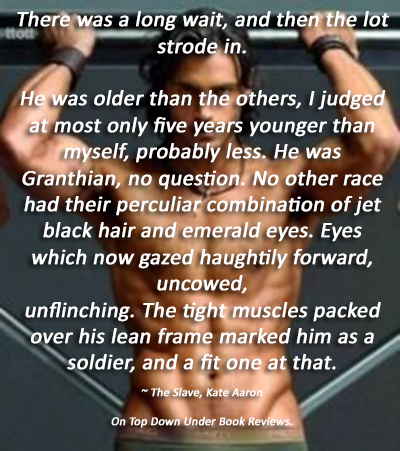 but he does not speak of love and Tam would like Master to speak of it. Tam was originally bought for the Mistress but from the beginning it was the Master he always felt safe and protected with; and after the ordeal of being forced to watch his family slaughtered, his younger sister raped to death, then him thrown into the Cage for sale,  Tam  understandably has a need  for feeling safe. Protected.  When Mistress left, Tam stayed with Master. Six months alone with Master and now Master wants to buy another pleasure slave. Tam isn’t keen, he likes having Master all to himself. Further adding to his concerns is that Tam will now be replaced by this new slave. Tam is not just used for pleasure, he cleans, takes care of certain household chores and always presents for Master when he has breakfast and when he comes home from work. Master supplies affection and contact the very tactile Tam craves. The interesting thing is, that rather than buy the new slave himself, Master assigns the duty and responsibility to Tam. Tam knows a younger slave is the right purchase, they are more tractable and will learn easily when young. There are plenty of young boys that pass through the Cage but Tam selects a fiery, older male, one who looks around twenty two. He hears the men around him talking about breaking the black-haired green-eyed soldier, and he feels he has to buy him to save him. Will Master be displeased with what he spent, and who he spent it on? Why he spent the money on this man?

Kai is/was a Granthian solder who finds himself in the Cage. Originally there is no 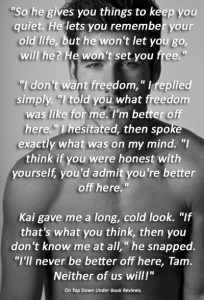 background as to why Kai was in there,  how a Granthian soldier found himself in such a predicament. As the story progresses you learn snippets, but not a lot, about why Kai is edgy and flinches when touched. Although Granthia is not a place that allows same-sex attraction, Kai loved another man who died. How and why he died he will not discuss. He also makes it clear that he will not be having sex with Master. He rails against using the word ‘master’ and he pushes slave-boundaries all the time. He also wants to look down on Tam for being nothing more than a captive who doesn’t try to escape and allows himself to be fucked by a man. A man who owns him. What point is there to life if you can’t be a free man?  Another fact is that it was  Granthian soldiers who killed Tam’s family. At a core level Tam knows this, but he bought Kai anyway. He is nice to him and tries to make Kai see that life could be so much worse than being in Master’s household. The war may rage outside, but Otiz and the compound they live in is free from strife and tensions. Food, shelter and necessities are provided. 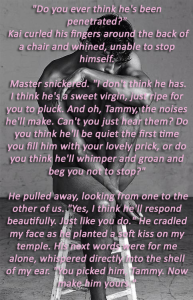 The Master is on the road a lot. Not much information is forthcoming about his work or where he goes for periods of time, why he is increasingly more tense as the months progress. But one thing is made clear, the training of Kai, Kai being a good pleasure slave, is up to Tam. Tam does not wish to teach Kai. He loves Master, he doesn’t want another. At first it seems natural that Kai would rebel as he was a soldier and use to being out in the world. He’s older and never been a slave. Tam tries to understand Kai’s position. He also senses Kai has more deep-seated issues and his beliefs are solidified when Kai suffers nightmares that cause him to wail in his sleep. He also shies away and curls into a ball in bed. Master makes it patently clear that Tam and Kai are both beautiful and he would love to see them together. He wants it. If Tam won’t make advances he will progress things using sex and not allowing Tam to come.

“You will learn, Kai, or Tam will suffer for it. He tugged my balls. “Sweet Tam, he would rather suffer, wouldn’t you dear?” He smiled at me even as he gave the sensitive underside of my shaft a vicious pinch to make it deflate.

Kai does not want to be used by Master. He will not succumb. He won’t. But Kai is 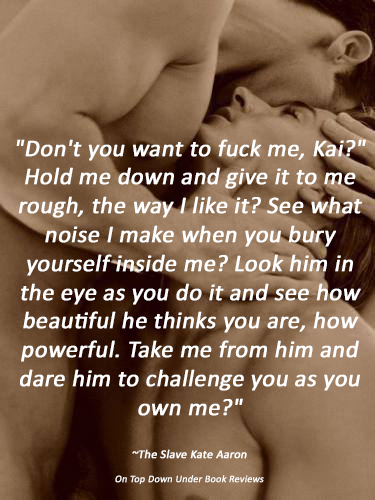 growing attached to the sweet, naïve and beautiful Tam. He is alluring and Kai wants him more and more. Kai starts letting Tam sleep next to him in his bed. Master is not stupid, he knows how to press buttons. He leaves Tam on edge, not allowing him to come for days at a time, that will be Kai’s job, and his undoing. But Kai does not want to be set up via Tam to be used for pleasure by Master.

The Slave could have easily have fallen over in a number of places if not well written, but it didn’t, because it is well written –  Master has had Tam with him since Tam was twelve and Master twenty two. That could have come off as an odd brotherly relationship and, perhaps for some, crush sexual intensity, but the intensity is there. It actually builds.  There could have been melodrama as opposed to genuinely believable feelings being displayed by three men as they start to find their place. It could have just been a vehicle for a lot of mindless fucking, and it isn’t. The sex scenes are built upon, purposeful, and incendiary. There are some threads deliberately left dangling by the author for the next books – to discuss is to spoil, so I won’t. I enjoyed the dangling lines because they are reeling me in, deliciously, towards the next instalment. I truly loved the dynamic between the men – Tam the submissive conduit between two strong, yet different, personalities.

I cannot wait for The Soldier… and then the third instalment in the trilogy of Free Men. The characters, the burgeoning plot, the hot sex scenes, made this book for me – Tam is just so sweet, selfless, and kind. Kai, Feisty and edgy and grew into someone I wanted to know more and more about. Master, a great observer of behaviour, strong, and also kind when many in his place would not have been. This instalment sets up the relationship between the three men perfectly. The connection and chemistry palpable. There’s action towards the end and it finishes on a full-blown-nail-biting-fuck-me-dead-freaking-cliff-hanger. The ending left me wondering about…things, machinations….I can’t say. It’s all right…I am okay with that! Really…The Soldier releases on the same day as the Slave and I will be there waiting with my Kindle for it to drop. Kai will be the primary voice of The Soldier, as Tam is in The Slave. Fantastic fantasy and sexy as sin, The Slave is just that little bit different and highly addictive. One more thing…that cover. I don’t know who did it but, gaw! That is Tamelik. 5 Gimme More Stars! 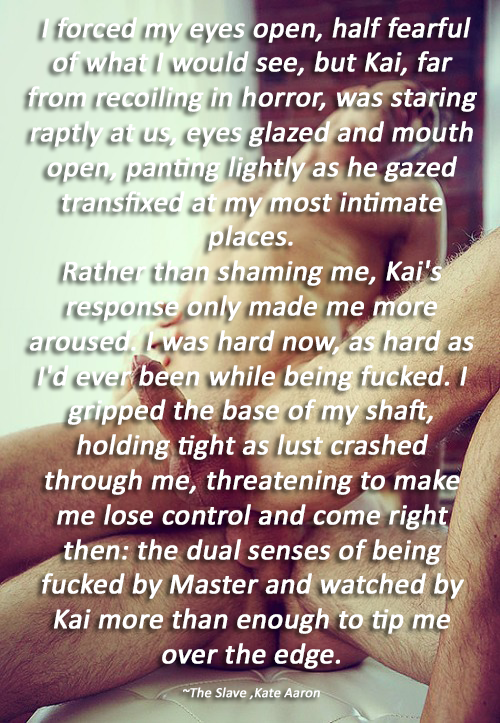 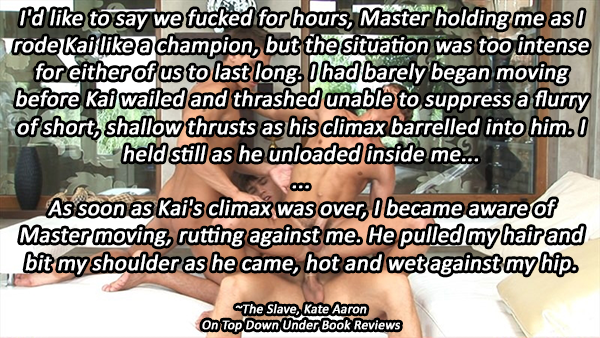 I read this as an ARC as well and you really and truly were spot on here! This book was amazing and this series is going to be a top favorite for me

Yes, this has the potential of being a very good series, Meredith. Particularly if The Slave is anything to go off. Cheers!

This review makes me want in. The pix rock and roll. Keep it going. 😉

Jay, this has you written all over it. I think you can see from the, uh, quotes 😀

I really want to read this based on your review. I can see me falling in love with Tam. He’s my type of character. 🙂 The cover is gorgeous, and probably one of the best I’ve seen this year.

Fantastic review for what I can tell is a fantastic story. I just added it to my TBR.

Love the quotes and pics.

You’d definitely love Tam, Cindi. He is a “Cindi” character for sure. The cover is pretty darned good. It is perfect for the content, not just aesthetically pleasing, although it is that too 🙂

Thanks, Cindi. I worked extra hard on the pics for you, lol.

Don’t you wanna fuck me, Kai? Forget Kai. I REALLY want to. OMG. Those pix and words. I need a cold shower or spoon or something. I HAVE TO GET THIS BOOK.

LOL, Lee. That is awesome – a cold shower or spoon…Yes, you should definitely read this book 🙂

[…] first review of The Slave is in, courtesy of the awesome Kazza at On Top Down Under (warning, link images NSFW). She gave it five glorious stars, saying, “Fantastic fantasy […]

[…] On Top Down Under: “Fantastic fantasy and sexy as sin, The Slave is just that little bit different and highly addictive.” (Link NSFW) […]

WIP Sneak Peek, and Other Stuff