Cheryl McIntyre Interview + Giveaway of Let It Be

Today, Kazza and Cindi are pleased to have Cheryl McIntyre join us for On Top Down Under’s  2 Year blog anniversary. Cheryl is the author of some  incredibly  popular books and series –

Cheryl McIntyre is the author of the Sometimes Never series, the Dirty series, the Dark Calling series, and the Infinitely series

All books above are linked to Amazon

**GIVEAWAY NOW OVER, CONGRATULATIONS TO JANA**

Kazza: Recently I had the pleasure of reading Let It Be about Guy and his journey with Ian.  I know this is actually part of a heterosexual New Adult romance series, but you chose to write Guy’s story and Guy is gay. First off, as a primarily LGBT blog, I say thank you for giving him a story. What made you decide to give Guy his own novella? How did it differ for you writing Guy’s story? Or is it as easy as we see it here, love is love?

Cheryl: I wrote a couple of scenes from Guy’s POV after finishing Sometimes Never (the first book in the Sometimes Never series). I loved writing from his POV more than I anticipated. I toyed with the idea of giving him his own book right then, but I had three more books planned first. I decided he would get last say because Guy is the backbone of this entire series. Every single character is tied to him in some way.

I’ll be honest. As much as I enjoyed writing from Guy’s POV, I was terrified that I would not be able to give him a believable voice. However, I quickly realized that I was looking at it completely wrong. I was treating him as though he were different from the characters I wrote before him. As soon as I corrected myself, and put that aside, Guy’s story came to life almost effortlessly. He had so much to say. And I needed to make sure it was said for him.

It came down to exactly that—love is love. It doesn’t have a gender, or age, or religion, or sexual preference… It just is. So that’s the way I wrote it.

Kazza:  The Sometimes Never series touches on serious issues that teens (and

older) may experience directly or via friends and loved ones. How hard is it for you to write about depression, cutting, self-loathing, fears, anxiety? General mental health issues? Obviously these are subjects that require realism and a sensitive hand when writing, both of which you handle very well. What made you tackle these topics?

Cheryl: I wanted to write something that mattered. I wanted to write about real people—perfectly imperfect, flawed people. In Sometimes Never, I played with the character’s names. Hope Love, Guy Handlin—I wanted to display the issues that made these characters who they were, and make it easy for everybody to see from the start. My goal was that one person would read and relate, and see that there is light at the end of the dark tunnel—he or she just has to keep going to find it.

I chose self-harm because I learned that 1 in 5 girls and 1 in 7 boys physically harm themselves. That number is too high to ignore. Every time I would go somewhere, I would look around, counting. Knowing that if there were 14 other females, three of them could be harming themselves in some way. The fact that I personally knew someone who did this to herself fuelled my desire to write it in a book.

Once I started writing about real-life issues, I kept going.

Kazza:  Apart from the New Adult series you also write adult romance of the edgy variety, Dirty #1-5 springs to mind. Can you tell us a bit about the Dirty novellas? I see readers/reviewers speculating on another one in the series. Thoughts on that, or am I stepping into undecided territory? ☺

Cheryl: With my love of writing about real subjects and flawed characters, I had to address revenge. Dirty is a very dark series. The premise being a man, Link, who watched the love of his life brutally raped and murdered in front of him, and his need for revenge against the men that committed these crimes. When is it okay to seek retribution on your own terms? Is it ever? How far is too far? The lines of morality definitely blur in this series, and it was definitely the hardest story to write for me.

I can confirm that there will be a full-length sequel that will be out early next year. And the five-part serial is now bundled and due to release on October 20 of this year.

Kazza:  I’m sure that there will be quite a lot of happy Dirty supporters knowing there is a new book coming out.

Kazza: Can you tell us what works in progress Cheryl McIntyre has going, or any books that can be expected in the very near future? Let It Be was so well written, I must ask, anymore books of the LGBT variety in the pipeline?

Cheryl: I do plan at least one more book for the LGBT readers, though I cannot yet confirm a release date.

The Sometimes Never series is complete, but I do plan a spin-off series with supporting characters to release in 2015 and 2016.

This December, readers can expect a new standalone novel—yet to be titled—that I’m very excited about.

And like I mentioned earlier, there will be a standalone, full-length sequel to the Dirty series.

Kazza: Writers are readers as well. Having said that, which authors have influenced you? What books have had a profound impact and stayed with you over the years?

Cheryl: I love this question! Slammed and Point of Retreat by Colleen Hoover are favorites of mine. I love the whole family dynamic and poetic writing. Drowning Instinct by Ilsa J. Bick has stayed with me, I think, because of the way she so easily twisted right and wrong in that book. I was left so unsure of my own thoughts when I finished. And The Sea of Tranquillity by Katja Millay. It’s just a beautiful story that pulled me in from start to finish.

Kazza: On a personal note, are there any personal hobbies, pursuits and passions that you can find time for outside a busy writing schedule? That help you distress or focus?

Cheryl: My number one passion is writing. I am always pushing myself to discover new topics and purposes to tell stories about, as well as telling it in a new way. I strive to make each book better than the last. I love working toward that goal.

I have three children, so family time is really important to me. After that, music, a glass of wine, and a hot bath are my go-to stress relievers. I love to read, though I don’t get as much time to indulge as I’d like to.

Kazza: And something I ask everyone interviewed on the blog, if you could visit anywhere in the world, where would it be? And why?

Cheryl: That’s too difficult to answer honestly. I have so many places I’d love to visit. To see new places and learn about other cultures is definitely on my bucket list. Everywhere!

Thank you to Cheryl McIntyre for joining us at On Top Down Under today.

An e-copy of Let It Be is being given away. Simply leave a comment below before midnight, October 19th (US Eastern Standard Time) to be in the draw for the fantastic novella, Let it Be –  Kazza’s review here 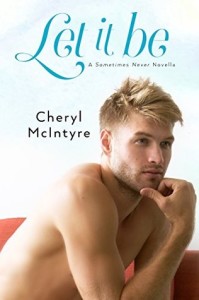 I’m the happy one. The dependable one.

The shoulder. The anchor. The pillar. The rock. The matchmaker.

I’m the one you call when you’ve had a bad day. When you need to vent, or scream, or cry. I will always be there to comfort you. It’s a gift. A talent. A role I’ve happily played. I’ve helped my friends become who they were meant to be. I’ve watched them move away, find love, start their lives.

But what about me?

When does my life start? Where is my happily-ever-after?

My name is Guy Handlin, and this is my story.

*This novella is a New Adult M/M romance. Recommended for 17+ due to harsh language, sexual situations, and adult themes.

Cheryl McIntyre is the author of the bestselling Sometimes Never series, as well as the Dirty series, Infinitely, and Dark Calling. She calls Ohio home, though she secretly dreams of living somewhere much warmer—preferably near a beach.

Let It Be links:

And the pre-order links for the Dirty bundle:

(Will be available via Amazon day of release.)

I love the sound of some of these series. Delish covers and all. I haven’t read this one so put me in. Hey thanks. 🙂 leesaund28@ gmail . com.

I loved Let It Be and another one of our reviewers, Judy, did as well. I agree, gorgeous covers. Cheers, Lee S 🙂

I have wanted to read Let It Be since I read Kazza’s review. I applaud any author who tackles real-life issues instead of glossing over them. I’m also a fan of dark books, so I will look forward to the Dirty series.

A huge thank you to Cheryl McIntyre for joining us during our 2nd blog-versary celebration!

Me too, Cindi. They are well handled. I have the Dirty series ready to read now. I need 36 hour days, then sleep 🙂

I agree, thank you to Cheryl McIntyre for being a part of the blog anniversary and for this giveaway.

Let It Be sounds so good. Thanks! 🙂

It is so good, Cassie. Cheers 🙂

Let it be sounds like a book I’d luv. I’m the happy one. The dependable one. I’m gonna cry just from that and then the rest. I’d like to enter thnx. 🙂

It is a good book and I got teary reading., Tina.

I want to read Let it Be because I love mm and real kinds of issues. Thanks for the interview and giveaway.

Thanks for anotber giveaway. I didn’t know about this author before but the series all sounds so good. Put me in please. 🙂

Hi, Jana. It is certainly a time for giveaways on the blog. All the series sound good, I agree!

Thank you to Cheryl McIntyre for being part of our 2nd year blog anniversary. Thanks to all who popped in and to those who left a comment.

Congratulations to Jana for winning an e-copy of Let It Be.