Giveaway: A Spartan Love + an ARe Gift Certificate, Kayla Jameth 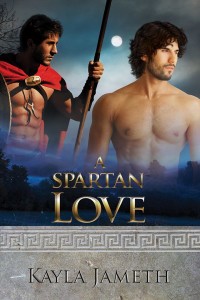 Alone, Andreas toils on a remote farmstead for a Spartan overlord. When a kryptes enters his world, Andreas fears for his life. The dread warriors stalk and kill helots—like Andreas’ father—as part of their training.

**THIS GIVEAWAY IS NOW OVER. CONGRATULATIONS TO LEE S**

About A Spartan Love:

My latest novel, A Spartan Love is set in Sparta during the early 5th century BC, approximately two decades before the events depicted in the movie The 300. The world Andreas and Theron live in is exactly as they believe it to be, that is, the gods and all their lesser brethren are real. Not unlike Homer’s Iliad and Odyssey.

A Spartan Love has been both a pleasure and a challenge to write. I love research, 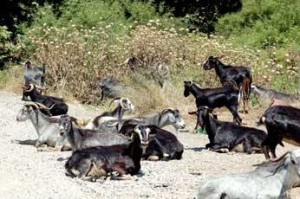 especially ferretting out all the really interesting and unexpected facts about the ancient world. But at the same time there are large and very frustrating gaps in our knowledge. Wherever possible, I’ve stuck to verifiable facts. However, that has left a lot to speculation. If I needed to fill in some gaps, I chose to follow the practices common in the rest of the Greek world unless contemporary sources called these customs into question.

This era and locale have been difficult to flesh out. The Spartans were laconic by definition. They only wrote down the really important stuff. They didn’t waste time on anything they felt was common knowledge, such as the details of their everyday lives.

And of course, I chose to write about the everyday lives of two very different men.

Andreas is a helot, a special kind of slave only found in Sparta. Unlike slaves in the rest of the ancient world, he is not a belonging and cannot be bought or sold. He serves an absentee Spartan landlord, not unlike the serfs of the middle ages. Helots vastly outnumber their Spartan masters, but the Spartans declare war on them every year to keep them cowed and their numbers down. 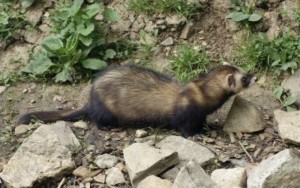 He lives alone on an isolated farmstead. While Andreas has a couple of neighbors within walking distance, his ferret Ictis and a goat named Pan are his only real companions. Sadly, Andreas wasn’t feeling very creative on the day he named Ictis. The word roughly translates as… ferret.

Theron is in the final two years of his training. He is an elite Spartan warrior known as a kryptes. Think Marine or SEAL. He is expected to live off the land with nothing more than the chiton on his back, a cloak and a knife. His task? Keep the helots under surveillance and prevent the possibility of a slave revolt, by any means necessary.

Helots and kryptes mix about as well as oil and water. Usually their interactions are limited to brief life-or-death struggles.

About the only thing Theron and Andreas have in common, is the fact they are both alone. One night, Theron steals Andreas’ dinner and develops a taste for his cooking and the rest, as they say, is history.

I just turned in the final round of edits for A Spartan Love before I wrote this post. Even though the official edits are now complete, my novel won’t be available until December 8th. So keep A Spartan Love in mind for the history lovers on your shopping list as Christmas draws closer. 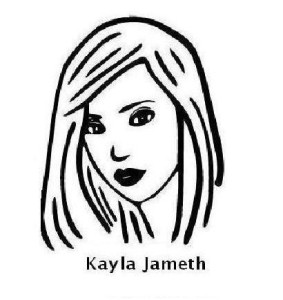 A knight and a former princess, Kayla Jameth now spends her time writing m/m romance. A true Renaissance woman, she has done everything from cross stitch like a proper lady to welding with the best of them. An eclectic life has left her with an unique understanding of the world inhabited by men and an appreciation for the difficulties faced by men in m/m relationships. It is her devout wish that her experiences translate into a richer telling of such tales.
Facebook: https://www.facebook.com/KaylaJameth?fref=ts

Now for the fun stuff. Comment below by Midnight October 19th US Eastern Standard Time for a chance to win a $15 ARe Gift Certificate. Be sure to leave your email address as that is how ARe distributes them.

Thank you to Kayla Jameth for joining us today as part of our 2 year blog anniversary, and for allowing us to preview her new book and its beautiful cover.

Thank you for giving me the chance to join you for your anniversary. I hope you have many more years ahead.

Thanks for being a part of it, Kayla. Love that cover, the blurb, and the giveaway is great!

We’re looking forward to some more years too 🙂

Thank you for hosting me.
If I remember how these things work, your dog chooses the win, correct?

Yes, I generally get Trudy to pick, but you can pick if you would like. Only one person doesn’t have their email on here and I have that in background.

It doesn’t finish until tomorrow and it has been a pleasure hosting you, Kayla 🙂

I have a white ferret someone just let it go and it turned up and started eating my dog’s food one day. He’s so sweet so i love that A Spartan Love has a ferret in it. It is a pretty cover. Thanks for the give away. janap86@outlook dot com 🙂

A white ferret? Sounds cute 🙂 ARe certificate is pretty good, isn’t it? Thanks for stopping by, Jana.

We had a ferret when I was a kid. They are such fun, happy little things. When I saw that ferrets were one of the types of pets ancient Greeks kept, I couldn’t pass it up.
Thanks, I love the cover too.

Thanks for the giveaway. Honey any man who can cook wins me. 😀 leesaund28 @ gmail . com.

I have to agree. Someone cooking for me always sounds wonderful. Thanks for dropping in, Lee S 🙂

Any man who likes animals and can cook is a keeper in my book too.

I was sold on the man who can cook. *grin*

A huge thank you to Kayla Jameth for being part of our 2nd blog-versary celebration and for the great giveaway!

Thanks for having me!

Best of luck with the new release. Sounds like an interesting period and a great story!

Thank you!
I do hope enjoy it.

Thanks heaps for the gift cert. and the giveaway. Sounds like an awesome story, to boot. 🙂

Thanks for dropping by and taking part, Cassie 🙂

Thank you to Kayla Jameth for being a part of our 2 year blog-versary and to all those who popped in or left a comment.

Congratulations to Lee S the winner of the ARe certificate. Enjoy!