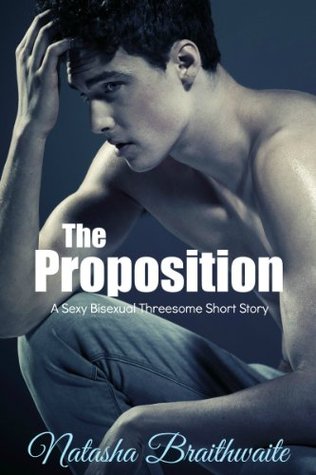 Nick and Christie are lovers and co-workers at Arlan Finance and they are about to give a presentation for their company in front of people within the industry. Or as Nick thinks –

…and this was the moment, the make or break moment, where I got to dazzle and impress industry bigwigs with my brilliance, or fade away into the ranks.

That they are nervous becomes just that much more when Henry Caldwell is watching on. Henry is a mover and shaker within their companies sister co in New Orleans and has donated millions to charities and is well thought of within the industry in general. But Henry seems to hold Nick’s gaze just a bit longer than sizing him up. Christie has already noticed him and Nick quickly makes notes about him –

…he was good looking – black hair, just a steak of gray at his temples, muscles and money.  He really had it all.

After the presentation goes well, their boss introduces Nick as an up and comer in their company to Henry Caldwell, who agrees. The presentation was informative and entertaining. During their first meeting Nick’s phone keeps ringing, he eventually picks it up to find his mother is in trouble again. She has addictions and one of the things that Nick likes about Henry is that his donations help people like his mother. Although Nick tries to be guarded about it, Henry works out that Nick’s mother has issues. Henry seems to understand and it appears he has a past himself. Just what that is we don’t find out in this book #1.

Pretty soon both Nick, Christie and Henry are getting along at the New Year’s Eve gala and they decide to take it somewhere quieter. Here, Henry tells them that during his 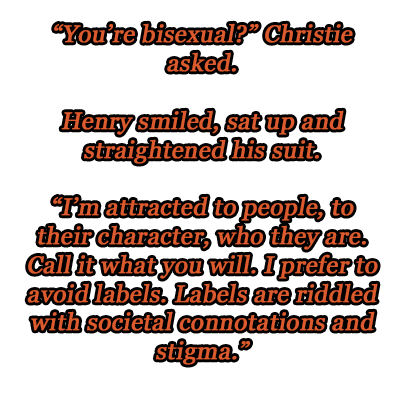 travels abroad, when he was younger, he took in a live sex show in Amsterdam – two men, one woman, and he liked it. A lot. He puts forward a proposition to the couple for a ménage. One night s all he asks. He gives them his card and tells them to ring him if they decide they are interested. When they talk, it appears Christie is keen but Nick isn’t sure exactly what the ménage will entail. Does it mean they both fuck Christie? Will he have to suck Henry’s cock? Does he get fucked by Henry? He has never been with a man before but there is a part of him that is interested. Interested in watching Christie get fucked and interested in what might happen between him and Henry. But that doesn’t mean that he isn’t nervous. Christie encourages Nick to text Henry and ask what he would like but Nick rings him. Henry assures Nick he will leave how far he goes up to him, and while he wants Christie, he makes it clear that it is Nick he is the most interested in.

Henry is charismatic and after some doubt, Nick feels the pull to him. Once Nick agrees, it is all systems go. Henry comes down to the pool and they start things off, there is no one else around. The pool is round one and Christie definitely enjoys some action between two men while Nick gets used to be being in a ménage. In a ménage with another guy.

She took one long lick of the head of Henry‘s cock, her pink tongue gliding

over the crown, swirling at first and then kissing with open lips. Then she took him all the way into her mouth and I had a jolt of arousal blast through me. I watched his face his mouth open, his eyes closed with a savage primal expression.

Watching my girlfriend sucking this man off turned me on in a way that couldn’t be explained with words.

From here they next meet up at Henry’s motel room to continue on, and for Nick and Henry to take it to the next level between them.

Henry held out a hand to me. “Come here, Nick.” His voice was commanding, authoritative…

I loved it. I loved having Henry Caldwell’s cock in my mouth. Loved the taste of him, the feel of his skin, the heat of him….

He adjusted his hips just a bit and the fullness of taking his whole cock was almost too much. I groaned. Then he pulled out, the heat was replaced by a stretching sensation. Then he went all the way back in once again.

In and out he went, his cock slick with lube, until finally there was no longer any pain, only pleasure.  I relaxed into it enjoying the feeling of having Henry balls-deep inside of me…

After all these years of fucking women and loving it, here I was, thoroughly enjoying getting fucked by a man.

The ménage works well for the three of them. I liked them all, Christie was the initial catalyst for Nick trying something new. Nick is nervous, but gets into it, and Henry is patient and sexy. Nick does get a bit pensive initially after being fucked, wondering if it made him any less of a man, but that was soon banished from his head. If you like a woman in between your men and if you are open to men in between your woman – if you are open to bisexual ménage – then I can recommend this short. I thought all characters were fleshed out pretty well, given the page count, but I know there is more to do with both men’s backgrounds and I want more ménage action.  So…I’m off to book number two!

What a nice review to wake up to.

I love the quote and the GIFs. It’s been awhile since I’ve read a good M/M/F. I may have to check this one out. Great review and that last GIF? Wow…….

I enjoyed it, Cindi, and I’m two thirds of the way through book two now. It is like an addictive kind of soap opera and I’m enjoying it. More GIFS to come!

Sorry. I got a little excited about the “more GIFS to come” …. LOL

Seriously though, it looks like a nice story. I just downloaded it. It will be a nice change from my norm.

I’m glad you downloaded it. It was free .Bonus. It’s a really nice change of pace. I like to mix it up.

Holy fucking hotness. I’m goimg to download this
Thanks gor the review
Love the gifs too 🙂