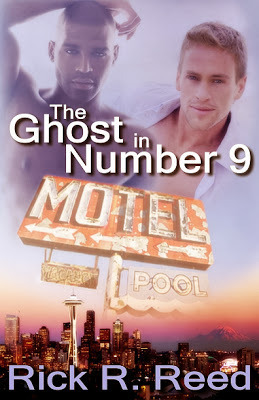 Purchase At:  – No longer available.

For Tony and Carter, room number 9 in the Galaxy Gold motel on Seattle’s seedy Aurora Avenue is a refuge. There, the two young lovers have found a place to hide away from a world that would condemn them for their love. Within the darkened, summer-hot confines of room number 9, Carter and Tony can explore their love and lust for one another, free of the burdens of the outside world.

But room number 9 holds a terrible and tragic secret, one that dates back to the Galaxy Gold’s opening back in 1962, when Seattle was hosting its World’s Fair. There’s a ghost in room number 9, and he has a message for Tony and Carter, a message about the consequences of shame and hiding love behind a closed motel room door.

Will Tony and Carter listen to the ghost’s message and have the courage to bring their love out into the open? Or will this long-ago story, one eerily similar to Tony and Carter’s, be ignored?

The answer awaits in room number 9…

Tony and Carter meet often in room number nine at the Galaxy Gold Motel, in the now seedy section of Seattle. The Galaxy Gold has been around since its heyday when Seattle hosted the World Fair in 1962. Their relationship isn’t in the open, and from the looks of it, never will be. They have to hide their relationship from the outside world and room number nine is their refuge. It is the only place where the two lovers can meet and just be. They can love, talk, and dream of a future that can never be – one that would destroy one of them if their relationship was ever made known.

Someone else is in room number nine, someone who isn’t seen nor heard, until he makes an appearance to one of the men.

“I’m always here. I was here when you and your boyfriend were fucking today and every time before,” the ghost named Bill Silver says.

“As I said, I’ve watched you and that colored guy have sex. Pretty racy. In my day, even here in Seattle, that kind of behavior could get a man in a lot of trouble. The queer stuff is bad enough, but throw in the mixing of the races and even in the northwest here, you’ve got big trouble. Still, it looked very sexy, watching that colored dick go in that white ass.”

Bill has his own story about love – about loss – about tragedy. His story absolutely broke my heart. I won’t give the details, but it was not quite what I was expecting. Part of it yes, but not all.  Bill speaks with the man and tells him his story. By the time the conversation is over, the young man has made a decision – walk away from the love of his life if it means having to hide. The love is there, but does he want to remain the dirty, little secret to someone who has another life and can never be with him in public? Or in any type of real, normal, relationship? Decision made, he contacts his lover. 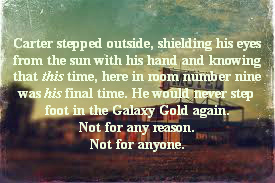 There is much more I could say about this but it’s a very short story and I don’t want to give it all away in my review.  I am purposely leaving out specific details, and the reasoning for Bill’s sudden appearance. It’s a short story, so I recommend that you read it yourself. You won’t regret it.

Every single book I’ve read by Rick R. Reed (and trust me, I’ve read a lot) has some type of message in it. This one is about being who you are and the consequences of what could happen if you don’t. Bill’s story is tragic beyond words, and it is his hope that Tony and Carter are able to either move on as an openly gay couple or go their separate ways.

Before I read this book, I accidentally skimmed reviews on Goodreads. There’s one quick one (only a line or so) that angered me. I felt that this person had completely given the ending away but I was wrong in that regard. As much as I enjoyed the story, and the fact that the ending was exactly what I normally hope for, I have to say that I would have been perfectly fine had it gone in another direction entirely. I felt that the character deserved more, but that’s just me. However, the story did end well, and exactly the way it should have for the message of the story to be told.

Everyone knows my love for this author’s work, so I’ll end this as I always do by saying that this is another great read by Rick R. Reed.

Hmm, I need to know more now. Cryptic Cindi, that’s what you are. I guess I have to read it now and I am very tempted to pick it up today. Sneaky little review

The man can’t write a bad story. Seriously. I thought I knew where this was going and it didn’t go there. Not to mention that the story of the ghost had me all teary-eyed when I wasn’t expecting it.

It actually took me longer to type my review than it did to read the short. I didn’t want to give anything away.

Thanks so much for the beautiful review, Cindi. Glad you got something out of it.