Spencer is just amazing for being so gentle, having such a big spirit and compassion that would put him at the top of any list for one of the most soul-deep-beautiful characters of all time, of any genre.

…is what I said when I read Aaron in 2012. Spencer does nothing to dissuade me in any way from this sentiment. He is wonderful and I am so glad he got his book with Aaron by his side.

Spencer starts three years on from Aaron. The guys are twenty one now and Spencer is about to graduate college. Aaron has a decreased course load so he is still a while off graduating. But they have been working on some software together and Spaaron is formed from their mutual work.

Allen, Aaron’s middle brother, is leaving home to attend Purdue and Anthony, the youngest brother, is fourteen and definitely angst-y with  issues of his own. Allen leaving is hard on Aaron as he is close to him. Allen has been an incredibly stabilising influence for the Downing brothers. All the family have been impacted by Aaron’s trauma. Allen has dealt with it, Anthony is still angry about it. Now their grandmother has cancer which means their mother is not around a great deal either, so more change is happening in the household. More feelings of desertion.

Relationship wise there have been some improvements, Aaron can be touched now, but things are still shaky for Aaron and Spencer. Aaron tries but he cannot be physically intimate with Spencer. Spencer misses the contact and the genuine desire he craves from another human for him – we all need to feel desired. He desperately wants it with Aaron but he will never push Aaron. For Aaron, he will make do with some occasional side-by-side masturbation and his love. On one of the occasions when they are making some intimate headway Spencer’s dad comes home and walks in on the two naked. Horrified, Aaron gets dressed and takes off. Aaron is not keen on anyone seeing his scarred body and he is, understandably, not comfortable with sex after his horrendous rape and torture. So there is an issue with Spencer physically needing more and Aaron not being able to give more. This also creates a kneejerk reaction for Spencer’s immediate need to move out of home.

That kneejerk reaction is aided by a solid feeler put out for Spaaron by an IT company in Chicago, Voyager Technologies.  They are offering six figures to buy it and also a substantial salary for the guys to come in and 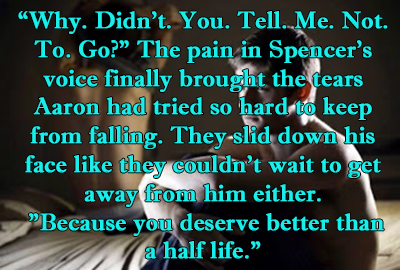 head up the project. Spencer wants this, but he doesn’t want to upset Aaron. He needs his independence and financially he wants to stand on his own two feet. He wants an everyday life with friends. Since Aaron and their relationship, Spencer has pulled back from other people he used to socialise with. All the things you crave when you are young Spencer craves, and with this job he can do these things. They also know he is deaf and don’t blink an eye about it. They make provisions for it. Maybe if he does things right Aaron will come with him because that would be his dream. Spencer can’t commute from where he lives into Chicago, so he has to make a decision. Aaron  received an email with the same offer but he trashed it. Change is frightening for him and he cannot envision this at all. Spencer, however, decides to accept the offer, but he also makes a commitment to come home most weekends to be with Aaron. He sees this as independence and maybe he might be the only one in their relationship able to work long term. Aaron may never get to that point, so Spencer has to grab this opportunity.

Aaron sees his brother leaving and to him it is Allen escaping the madness that is Aaron’s life. He sees Spencer taking this offer, even though he signs off on it, as someone else leaving him, and his mother not being around as much, while totally getting it, is another person to add to the list. Even Doctor Thomas, his therapist, seems to be more successful after his work with Aaron and he doesn’t feel he is there for him as much. All of these thoughts send Aaron spiralling downward and he needs to take his anxiolytics for the first time in years. He feels increasingly anxious, sad, and hopeless – he can’t have sex with his loving boyfriend, he can’t accept a good job offer, he can’t go to Chicago with Spencer and he has to take meds again. He is certain that Spencer will get what he needs elsewhere and that he will leave him. Spencer also worries that Aaron will move on from him.

Doctor Thomas has encouraged Aaron to join online support groups and finally he does. Here he meets another survivor of crime, Jordan. Jordan’s  twin brother was killed in front of him and he is left devastated. Both Aaron and Jordan connect over their mutual loss of innocence and the pain they both feel. At a time when Aaron doesn’t want to see pity in other people’s eyes, Jordan offers him something different. To make matters more intense, the men who brutalised Aaron and killed Juliette are found. Aaron is the only survivor of their crimes so they need his testimony to help put them away. The timing couldn’t be worse. Spencer feels inadequate living away from Aaron more nights than he can be at home and Aaron is terrified of facing his attackers.

Spencer is a wonderful book. I read it in one sitting. It left me loving  Spencer that much more. I am so glad that J.P Barnaby revisited these two wonderful characters. Not only did she revisit them, 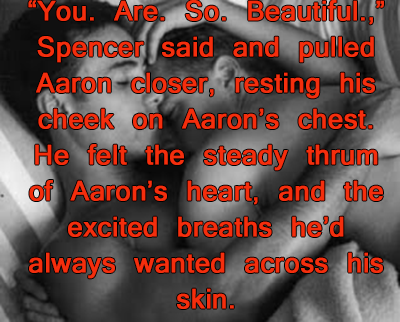 but she improved on the story by doing so – not all authors get that part right. The subjects handled were done with amazing empathy and sensitivity and a great understanding of what it is like being involved with a survivor of abuse/trauma, how hard it is for the survivor and how hard it is for those around them as well. What it is like to be twenty-one and needing contact, work, friends. The normalcy of it all. Being lonely and craving touch. Being scared, scarred, and immobilised, thinking of the what ifs. If you liked or loved Aaron, you need to read Spencer. If you haven’t read Aaron, I can’t recommend it highly enough. If you want to read Spencer as a standalone you certainly can, but I definitely say ‘read Aaron.’ 5 heartfelt stars (and much love) for Spencer.

ARC supplied by Dreamspinner press in return for an honest review.

I love when an author can continue a story with beloved characters and not only add to their story, but bring everything together in the right way. I have owned Aaron for so long. I really want to read it soon and then jump into this one.

Your review broke my heart in some places. I can only imagine how I would feel after reading both of these books.

Great review and the quotes got me teary. I really need to bump these books on my list.

I’m just so glad to have had this follow-up book for these guys. It was fantastic to revisit them. And JP Barnaby got it so right.

If ever you do get a chance you need to crack out Aaron and then follow it straight up with Spencer. They are so worth it.

Thanks. I could have used so many quotes, Cindi.

Thank you so much. It’s an absolutely beautiful review. Cindi – Not all stories have a sequel, but there were things I wanted to do with Aaron and Spencer, but Aaron just wasn’t ready in the last book. He needed the time and space that a second book would give. There are two more in my head – one about Aaron and Spencer, giving them a little more time and space to work out the next stage of their relationship, and the second about little Anthony who climbed up next to me on the couch recently and told me he… Read more »

You are welcome for the review. Obviously Anthony needs to be heard now and Aaron and Spencer are simply gorgeous – if you write more about them I will certainly read them.

I agree that not all stories have (or need) a sequel. There are times when I get so engrossed in the world of certain characters that I feel that an author would never be able to do their story justice by continuing with it later. I can tell by reading Kazza’s reviews that you took them exactly where they needed to go. I haven’t read this series yet, though (like I said) I feel that this one benefited greatly by having other stories added to it. I have read Kazza’s (and other) reviews and followed Aaron and Spencer’s story closely.… Read more »