Portrait of a Crossroads, Kelly Rand 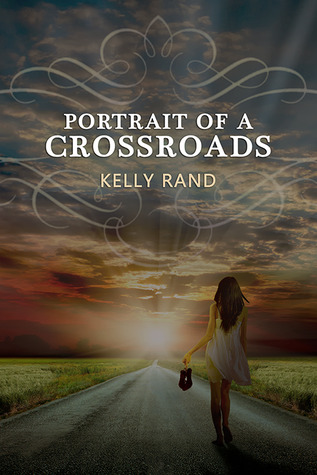 This is a very nicely written story. It has this no-frills, resigned feel about life, melancholic, but with hope. If you are looking for a romance then perhaps look elsewhere. This is about a relationship, but not where person A meets person B, they have insta-love, fall into bed, and then live happily ever after in fiction-land. It is subtle, contains an edge to it, and I believe that age and life experience definitely gives you an ability to appreciate this story just that bit more.

Annette is a young girl, eighteen, who is literally, and metaphorically living at the crossroads in her life –

Everything was connected to where she lived – at a crossroads, a four way intersection –

There were never any kids on the corner between Burford and Brantford. Annette missed seeing them.

The brochure on top was for Brock University, one of the best schools for studying education. It was located about an hour away from the intersection between Burford and Brantford.

Annette found her father hanging from a rafter in the basement of the family home the previous year. She lives with her two older brothers, Christian and Angel in the family home. Her brothers both work in blue collar jobs, it’s a blue collar kind of town, one where people try to escape somewhere else from. Annette doesn’t work, doesn’t go to college, doesn’t have friends, now – they all rushed out when the final bell sounded on their senior year of high, and kept going. She was neither popular nor unpopular at school, her oldest brother, Christian, makes sure there is a frozen lasagne in the microwave for their dinner but, apart from that, he is twenty four and has his own life. He also has a bike and can get around, unlike Annette who is isolated.

In this book no one is mean to one another. Her brother’s comment that the woman next door is a “dyke.” Apart from that one ‘observation’ there is no judgement. There are no protests when Annette starts spending time with Sadie, the “dyke” next door. Sadie seems collected, mature, Annette guesses in her late twenties, has tattoos, and does everyday things, like clipping hedges. She also paints portraits for people who commission them. Annette starts helping Sadie out by rinsing paint brushes and cleaning up. Sadie’s partner, Joanne, has just left. There is no great display of emotion from Sadie about this, it just is. There is never any great displays from anyone, it all just is. Even when Sadie and Annette go to bed, have sex, it just is. There are no declarations of love, no uncomfortable moments afterwards, it just is.

I liked Portrait Of A Crossroads because it is very, kind of, Australian in the way it is drawn. If you ever watch an Australian movie they are different – grittier, realistic, no flash. – this book was not flashy, the characters felt realistic. I was reminded of rural Australia and a certain kind of uncomplicated attitude there, which may be a funny comparison given this is set in Canada. But it’s painted so well, it’s so familiar it resonated with me. I felt like I was watching something real unfold as I read.

The descriptions given  – of two houses, the different sounds that vehicles make on the road, the traffic lights forever changing colour, the meaning behind a permanent coffee mug ring on a coffee table, the memories of the smell of warm beer and cigarettes on a missed father, the companionable silences that Annette enjoys, no one in the book is the loquacious type, the “cracked dry wall” comments from father and now son –  by Ms Rand are so vivid, so beautifully drawn that I thoroughly enjoyed something just a bit different.

I recommend the well named Portrait Of A Crossroads for people who like contemporary FF, or lesbian literature, those who like a subtle, quietly nuanced book about real people with no angst and no antagonists, rather a well written depiction of life for a couple of people at the crossroads of Burford and Brantford.