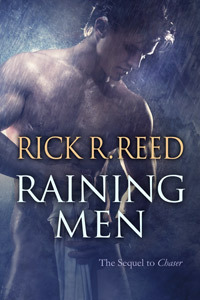 To quote the blurb:  “The character you loved to hate in Chaser becomes the character you will simply love in Raining Men.”  I remember reading this when this book was announced and thinking “Yeah right. Not going to happen.”  I seriously hated Bobby in Chaser and I knew without a shadow of a doubt that nothing, regardless of the talent of the author, would make me change my mind about him. Normally if I hate a secondary character in one book nothing will push me in the direction to read a book based solely on him.  Only my love for this author’s work had me reading Raining Men.  I am a big fan of Rick R. Reed and I knew I would read this one eventually (as I’m on a mission to read all his work) so I figured why not now?  I mean no disrespect to the author (and I’m sure he knows this) but I was seriously not interested in seeing Bobby get his happily-ever-after.  Those who have read Chaser know what I mean.  Now I have to say it would have been a total waste had I let this one go without reading it.  I was only 5% into this book on my Kindle before I was already feeling sympathy for Bobby.  Who knew, right? Farther along, I found myself rooting for him.  By the time the end came I was actually loving the guy.  Only a seriously talented author can pull that off with a character like Bobby Nelson.

Bobby is an egotistical, selfish slut.  He cares nothing about anything or anyone but himself. He will always get his way… and his man… regardless of who he hurts in the process.  This was proven in Chaser with Caden DeSarro, his so-called best friend and the only person who appreciated Bobby for Bobby.  Caden wanted nothing except friendship.  There was never anything sexual between the two of them. It was just friendship.  Instead of appreciating the fact that someone actually wanted him for something other than sex, he threw that friendship away in a very big, hateful way.  I started off loving Bobby in that book but by the time I finished it I hated him with every fiber of my being.  Through it all there were indications that what you saw of Bobby was not all as it appeared.  His outward, slutty actions were a facade.  He obviously wanted someone to love but went about finding that in a bad way.  It backfired on him and in the end he was left with nothing and no one.

Raining Men begins a few months after the end of Bobby and Caden’s friendship.  Bobby is dealing with the loss of Caden on top of feelings of pure loneliness for wanting what Caden had found with his man, Kevin:  love, companionship.  He uses sex as a means to take his mind off of everything when in turn the sex only leaves him lonelier than before once it’s over.  Bobby does not just have occasional hook-ups.  He has to have someone almost every day of the week.  Feeling more empty than ever, he goes to see a therapist, Camille, the same therapist that Caden saw months before.  Camille forces Bobby to take a step back and see why he is the way he is.  The sudden death of his father forces him to face things he is not quite ready for.  A visit to Seattle for the funeral cements it.  He’s miserable.  He hated his father while he was growing up.  The man had belittled Bobby often and made him feel unloved during his formative years.  Bobby had not seen him in the ten years since he left home and moved to Chicago.  No visits back home. No visits from them to him.

Home, where he was not the confident, successful, handsome, well-built man he was now, but a scared little boy who was made fun of nearly every school day for being a sissy and who hid in his room, reading books far too adult for a child. (Rosemary’s Baby in third grade, really?)

It was strange, and now Bobby did want to cry, because if he felt anything at all, it was relief.  The man was gone.  No longer would he be able to cause Bobby’s face to redden at the dinner table as he once had when a little Bobby asked him to please pass the salad.  His father had smiled, holding the teak salad bowl aloft, and Bobby had smiled back.  Then his father said, “I don’t know what it is, but something about you reminds me of a girl.”

No longer would his father be able to laugh off Bobby’s starring role as Tony in his high school’s production of West Side Story and refuse to be in the audience because, as he had put it, “Musical theater is for fairies.  You a fairy, son?”

No longer would he live to find fault, to ridicule, to ensure that nothing, nothing Bobby did would ever be good enough for his standards.  Bobby bent over the man and planted a kiss on his cold cheek.  He whispered, “You can’t hurt me anymore.”

While at the funeral home, Bobby reconnects briefly with Wade, a former classmate.  There is chemistry between the two men but family obligations prevent them from acting on it.  When they finally get a moment or two alone later, things don’t quite go as Bobby plans.

Back in Chicago, Bobby’s life takes a downward spiral.  More men.  More bathhouses.  More hook-ups with total strangers he meets online. Each leaves him feeling cheap and angry with himself but he can’t stop.  The reader is able to see a pattern with Bobby.  Each time something hurtful happens in his life he has a lot of anonymous sex. This is his way of blocking out the other stuff.  Caden refuses to speak with him. His therapist may or may not have a crush on him, even knowing he’s gay.  He can’t reconcile his feelings for his late father.  Wade, someone Bobby feels he can someday love, is hundreds of miles away.  When Camille suggests that he attend Sex Addicts Anonymous group sessions he balks at first but in the end decides to try it.  This is a turning point for Bobby as is finding a stray Chihuahua on his way home from yet another sex fest at a bathhouse.  Another member of the Sex Addicts group is Aaron.  Bobby and Aaron had met one time before but that meeting did not exactly put Bobby in a good light. Thankfully, Aaron had once been where Bobby is in his life so he manages to overlook that initial meeting and take Bobby under his wing so to speak.

This book is not really a love story though there is a bit of romance here and there and Bobby does eventually find love in the end.  This is about Bobby embarking on a journey of self-awareness.  He has a long road to travel before he finally gets where he needs to go.  He must deal with the anger and bitterness toward his late father. He must force himself to stop having sex with random strangers every time something traumatic happens in his life.  He must learn to accept that Caden may not ever be part of his life again.  He has to find himself before he can think about finding a man to share his life with.

This book did not go where I expected it to go and I have no doubt that was the intention of the author.  At first, I was not too pleased with the direction it was going in regards to a couple of the characters. Only when I really thought about it did I see that the story could not have been written any other way.  It was kind of a “what goes around comes around” type situation.  To say anymore than that would be too telling.

Bobby does eventually find love and he finds peace with himself and with the memory of his late father.  There is a lot of forgiveness toward others as well as toward himself.  The stray Chihuahua that Bobby takes home (inappropriately named Johnny Wadd because he is well-endowed)  and falls head over heels in love with, plays a big part in Bobby learning to understand how to love and be loved.

Overall, this is another amazing story by Rick R. Reed.  Never in a million years would I have thought that I would love Bobby.  Only a truly talented author could turn a character like him around as he did.  I do have to say that I am not sure how I feel about the Epilogue.  It brings closure to a few things that were left hanging in the book but I’m not sure if I’m on board with it. Don’t get me wrong, everything is tied together neatly and certain issues are resolved but a couple of those things I felt could have been left undone in my opinion, but that’s just me. Otherwise, an outstanding book.

The cover is beautiful and fitting for the story, as is the title.